Chasing France’s Past to Define Our Future

The other day I received an email from a longtime friend — someone I’ve partied with, worked on non-profit events to raise funds in our community, someone I’ve philosophized about the world with — and I read it, thinking it was going to be one of those jokes, the funny ones, the kind people send each other to lighten the day. Instead, it was astoundingly disturbing.

The email suggested that, since it was clear that conservatives and liberals do not get along, we should give up the ghost of trying to agree and get divorced. It advocated dividing up the United States, creating lines of “us” and “them.” In essence, it advocated civil war.

I think the email had a greater effect than intended because we had just returned from vacation in France.

The choice of France was two-fold: friends had invited us to join them for a VBT Bike-and-Barge trip on tributary rivers outside of Paris. And three years ago, a long-lost relative had contacted me. We’d been exchanging emails of a quasi-pen pal sort ever since and had wanted to meet. After our families had left Germany — more than 75 years ago making a forced emigration to Brazil, Switzerland and the United States — it looked like the planets were in alignment to make reconnection happen. 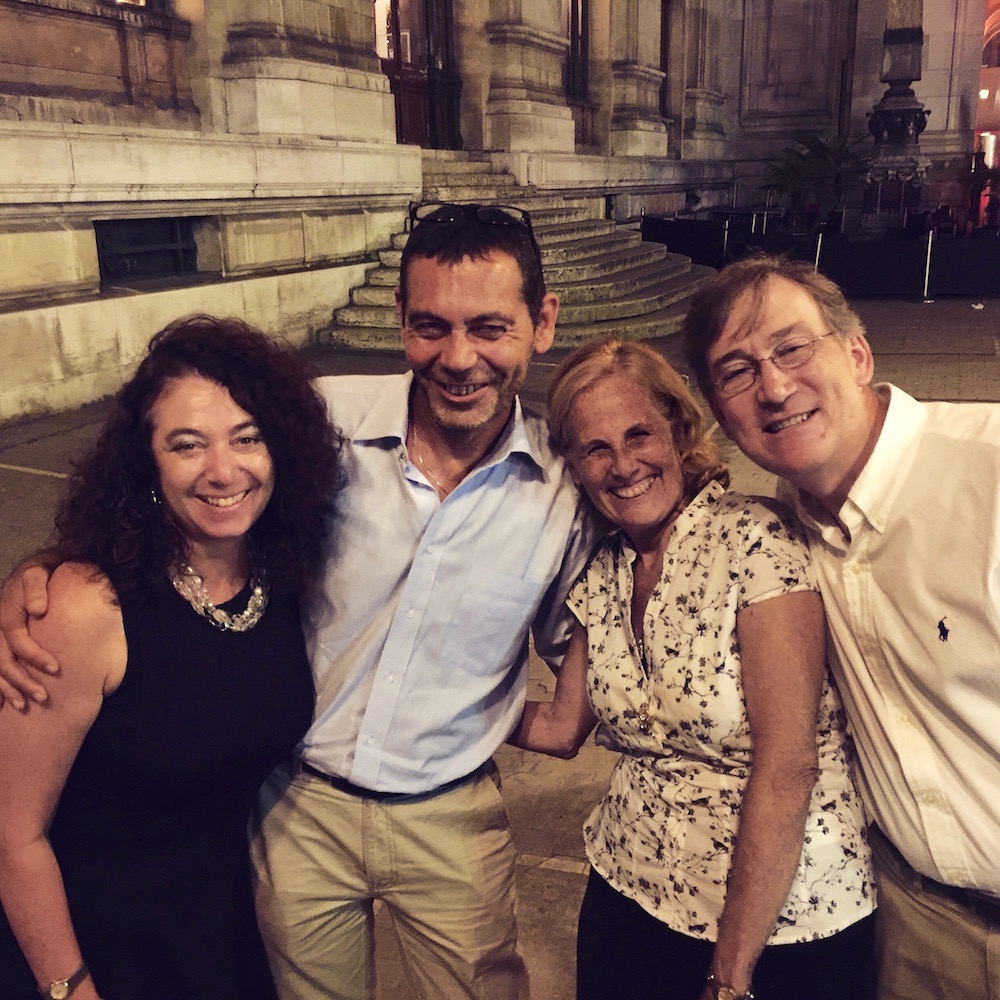 After over 75 years, long-lost cousins celebrate reconnection in Paris.

But France today? No longer the province of rose-colored glasses, but instead the scene of terrorist attacks. It was the gruesomeness of Charlie Hebdo, rampant antisemitism, intolerance and tension, blood-washed depictions of la Tour Eiffel shared on Facebook. It wasn’t the gilded Champs-Élysées and champagne; it was grittier, with senseless killings at popular cafes. The world grieved alongside Paris for its losses, but no one wanted to visit it. 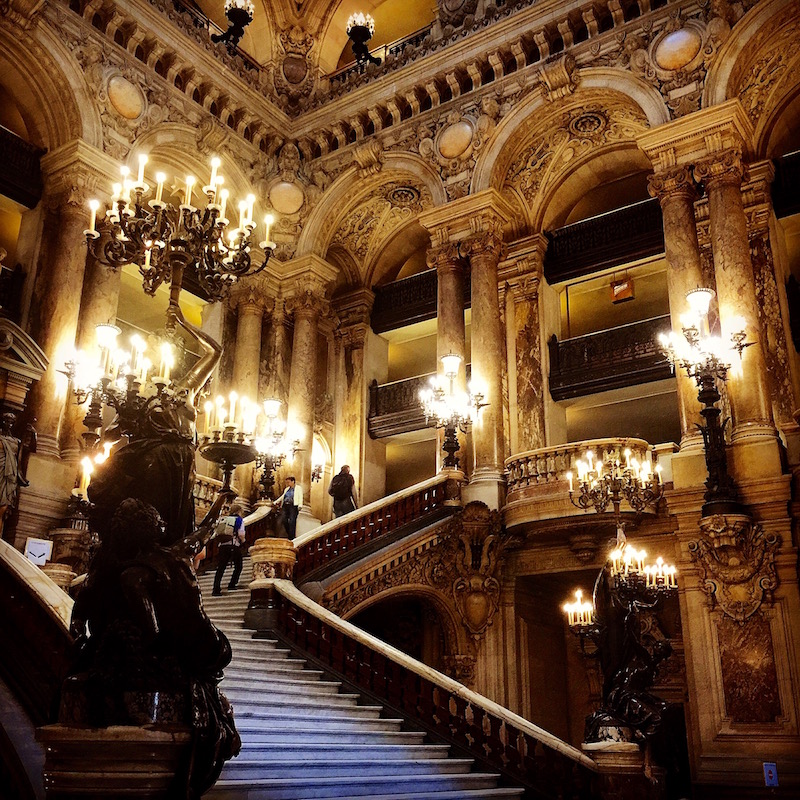 I’ve never been an advocate for adventurous living, but I figured — we’re going to be on a canal boat on little rivers out in the countryside riding bicycles! How dangerous is that?

So we went to Paris. To bicycle, to hang out with friends, both old and new, to see beautiful French scenery and architecture, and enjoy one of the world’s most enduring cuisines. 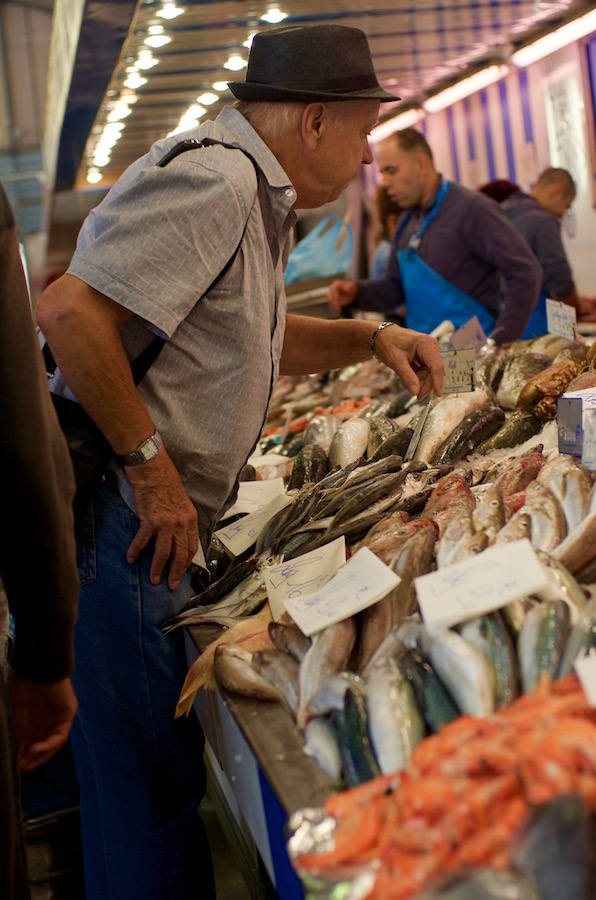 Of course I was worried about spending time in France.

Paris was hot when we arrived, a more intense heat than normal for August, and even more deserted than expected for the month when much of Europe goes on holiday. Paris was a tomb, an effigy of itself. The sidewalks rang with our footsteps, the stone buildings echoed our voices when we spoke to each other. It was more than the heat. The empty streets were ominous.

And then there was the unknown of what we were getting into, the barge itself. Holding 20 passengers and six crew, including our two VBT trip leaders, the cabins were compact, with nooks and crannies cannily crafted to hide away belongings. Two narrow bunks per cabin, several doors, cabinets and a whole lot of luggage made living in it for a week a Rubik’s Cube of contortions for every movement you made.

Whenever you’re on an excursion — a new experience — at first, there’s always an element of insecurity.

The first night on the barge I couldn’t sleep.

So I counted sheep.

Except (in my dreams) I told myself that sheep can’t swim, so when they jump over the barge, they’re going to land in the water. Sheep landing in water are really noisy. There’s a splash with each one, a lot of baa-ing, and each time, it wakes you up with sweaty palms, except I was freezing because the air conditioning in our little cabin was cranked up on high.

And then everyone else on the barge began shouting, “Sheep overboard!”

We all got up and pulled the sheep out of the River Seine and now bedraggled, they settled down on the bow of the barge. Everything smelled like wet wool. I went back to sleep.

Day 2: after the night’s excitement (and no sleep saving all those sheep), I was sick. Being sick while riding a bicycle is tons of fun. It’s just what you want to do on vacation, and you especially look forward to getting to know your fellow boat mates in between running for the bathroom. I’m not sure what happened to the sheep, but we dined on beautifully prepared chicken, fish and beef that week on the barge.

By Day 3, we all were in syncope, communicating unintentionally with that all-too-human flushing in the middle of the night. “You sleeping much?” we’d commiserate. “Nope, me neither.”

On Day 4, everyone was showing pictures of children, grandkids and dogs all around, to the crew, to the guides, to we silly fools on bicycles tootling all over France. We were sweating in the heat together, pulling for each other to ride up to the top of that hill together — because somehow, the mild French countryside had developed quite a lot of hills — and we were sharing beers together at the end of the day on the bow of the barge.

If you substitute French wine for grape Koolaid, it was like being at camp. I loved it.

Our two guides wore T-shirts emblazoned with the VBT mantra, “Shake hands with the world.” And much more interesting than the workings of our mutually human digestive systems were the reactions of the people we met in the quaint little towns we biked through each day. 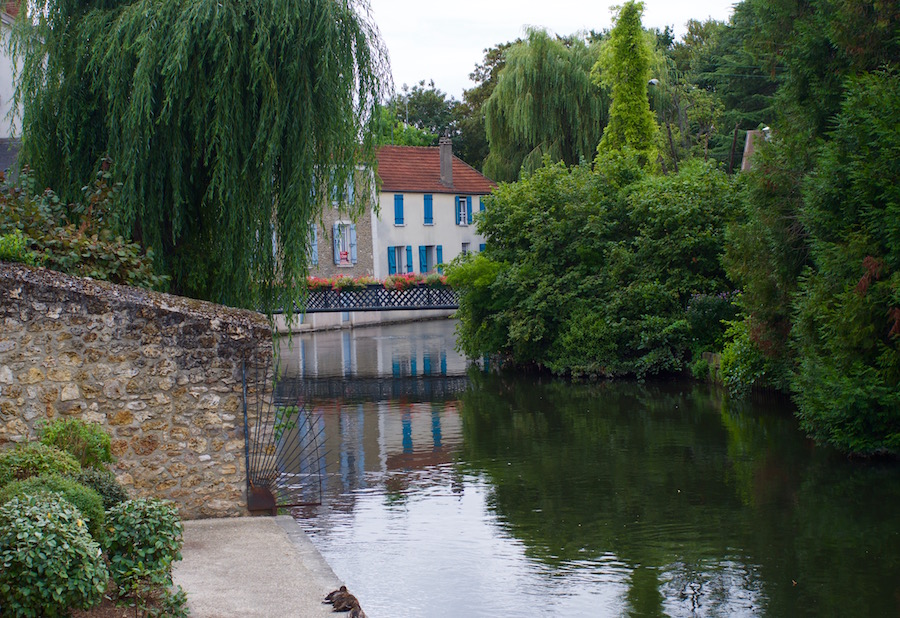 France is serene, particularly when seen from a barge, or a bicycle.

All over the Île-de-France, from Paris to Corbeil-Essonnes to Melun, Fontainebleau to Dormelles, Sens and the fairy-tale village of Villeneuve-sur-Yonne, the French welcomed us, thanking us for visiting.

“You’re brave for coming,” they would say. “But thank you, so very much.” 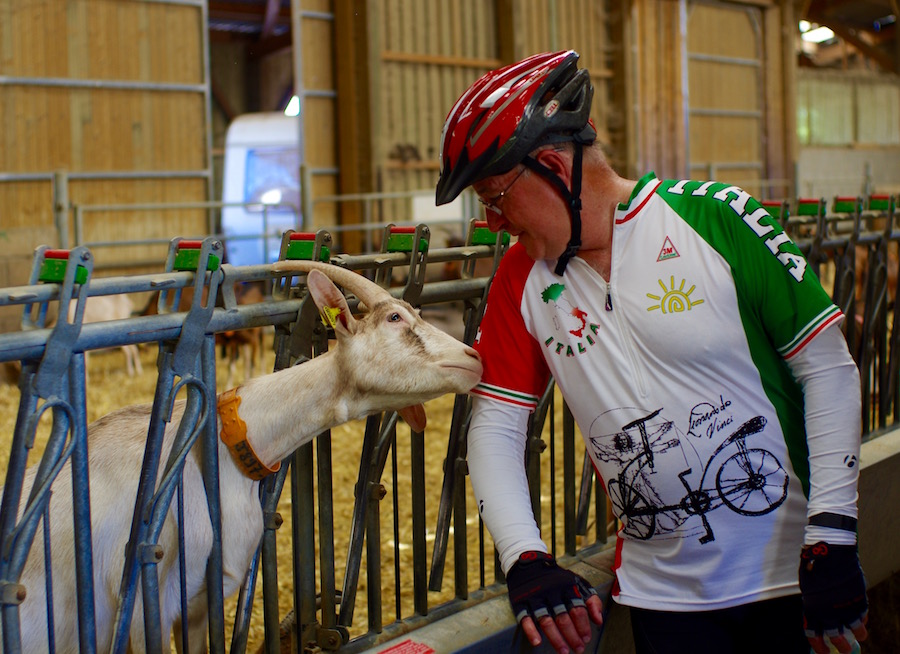 France is about making friends, even unexpected ones.

We toured Fontainebleau, the bejeweled chateau of royalty for 800 years, until the Revolution in 1789. We saw the exaggerated way royalty lived at the expense of their subjects, until the subjects rebelled, until one of their own, Napoleon Bonaparte, soon slept in the bedrooms of kings, replacing a monarch with an emperor, equally bejeweled.

I recalled my French and American history — our shared revolutions, our shared philosophers, generals and social historians. The names Voltaire, Montesquieu, Lafayette and de Tocqueville flitted through my mind as I remembered their writings. You think about a lot of things while pedaling up a hillside in France. 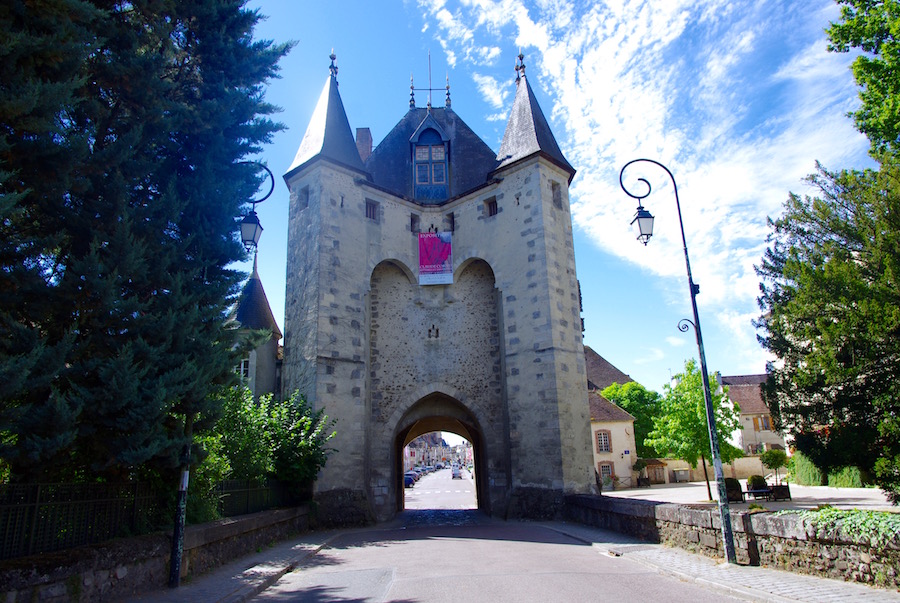 France is a fairy tale place, full of princes, philosophers and shared history.

And we sat in darkness with the others on the pavement in the plaza in front of the ancient cathedral of Sens, the stones still sun-warmed from an immensely hot day. Weary from cycling and the heat, we waited for the light show — Lumiére des Sens — to project on the stained glass and stone façade of the cathedral.

It was crowded in the plaza, and a graceful, older woman in a white linen dress, her husband and two grandchildren in tow, sank down on the stones next to me. After a week on a barge I was feeling pretty grimy, and a sound of dismay escaped, that she would elect to sit on the ground in a white dress.

“It will wash,” she told me in French, and we struck up a conversation, me telling her about our cycling trip, she telling me that they had recently moved from Paris to Sens, where it felt safer.

“I’ve always felt comfortable in Europe,” I explained. “My family was from here. Je suis Juif,” I told her. I am Jewish, or at least that is my heritage. 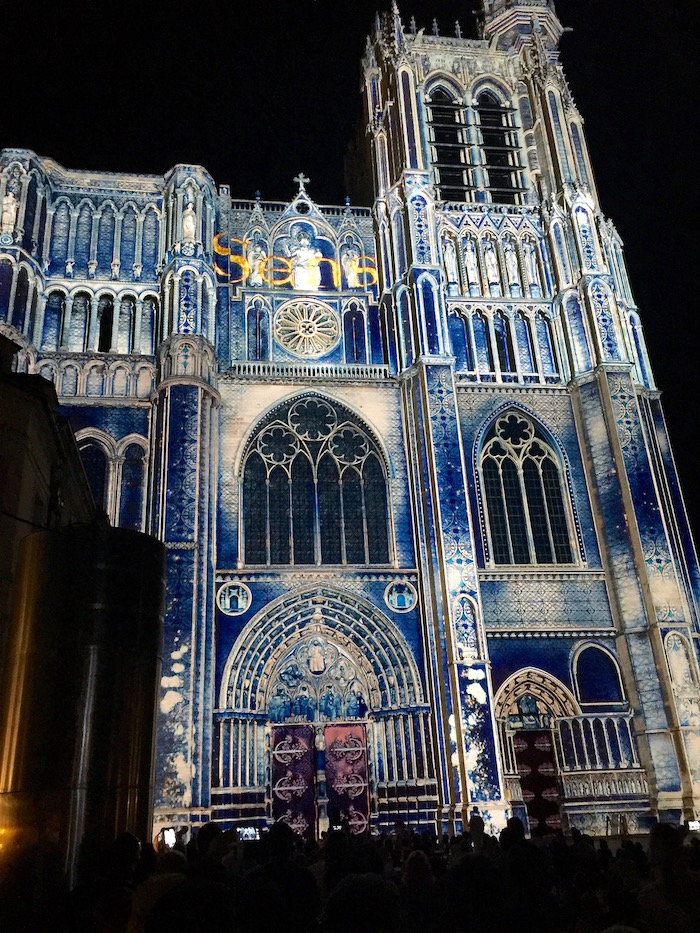 And then the light show began, a history of the cathedral from its beginnings over 800 years ago. We stood and watched, as stones were raised, the cathedral built and then it fell, as colors kaleidoscoped in swirls of florals and tapestries, the patterns Gothic, Medieval, Islamic — the East and West merged into one beautiful telling of its story. We stood there together in the darkness, celebrating France, the old, and the new.

And then we returned home, to the Etats Unis, to the United States. And I sit at my computer, reading the newspaper, reading about the unprecedented political fractiousness, and I wonder.

Chicken with Tomatoes, Serrano and Polenta

Loved your description of barge living! ( made living in it for a week a Rubik’s Cube of contortions for every movement you made). We had a similar VBT experience on a sailboat on Lake Champlain — I likened our quarters to living in a sardine can, so mostly, we slept on the deck! Lovely photos. I’d love to have seen the light show!

Wonderful. I’ve been considering biking in the Ahrweiler; the Kemme-Fischer ancestral home. I’ll be sure to avoid the waterways!

That looks like a beautiful area, too! I think I’ll put it on the “to-travel-to” list. The area was home to my Kahn/Selig/Hirsch ancestors, as well, and we plan to make a visit one of these years. Biking it would be perfect!

Am reading this on September 11, 2016. It was good to read this today, Emily.
“I looked at her and the barriers fell away.” I believe this happens more often than not.
Thank you for reaffirming that.

I loved this, Emily! I am feeling like it is one of the best blogs that you have ever written.

Thank you, Deb! Maybe I should go to France more frequently for inspiration.

I too think you should go back and do the Ahrweiler area… go even closer to your roots. 🙂

Touché! You did it again! So glad you are safely home……

What a wonderful adventure! I, too, have recently begun to appreciate my French heritage more. Visiting the battlefields of the Revolutionary War, I became much more aware of how the French aided us in the revolution. We quite literally could not have won without them. I sang for “Honor Flight” this morning, Emily. Your blog was a wonderful addition to a meaningful morning. Thank you!

Thank you, Charmaine! And I’m sure this morning’s Honor Flight send off, a very special one on 9/11, was gilded by your gorgeous voice.

Great pictures, makes one feel like they were just there

Next time we think we’ll try it like you guys did in the Loire Valley.

Glad your trip went well!! Love the cathedral picture with the lighting!