I posted a photo of one of my rose bushes on Facebook the other day. In full bloom, the colors were lush and unusual. The next day there was a monstrous hailstorm. We get them all the time during Colorado summers. There are people who swear off planting a garden because the hail and Mother Nature’s capriciousness makes the tame hobby of gardening a bit like playing Russian Roulette. But for many in our Information Age, the growing season is a chance to reconnect to the earth, a reforging of the age-old bond between humans and the miracle of seeds and water. 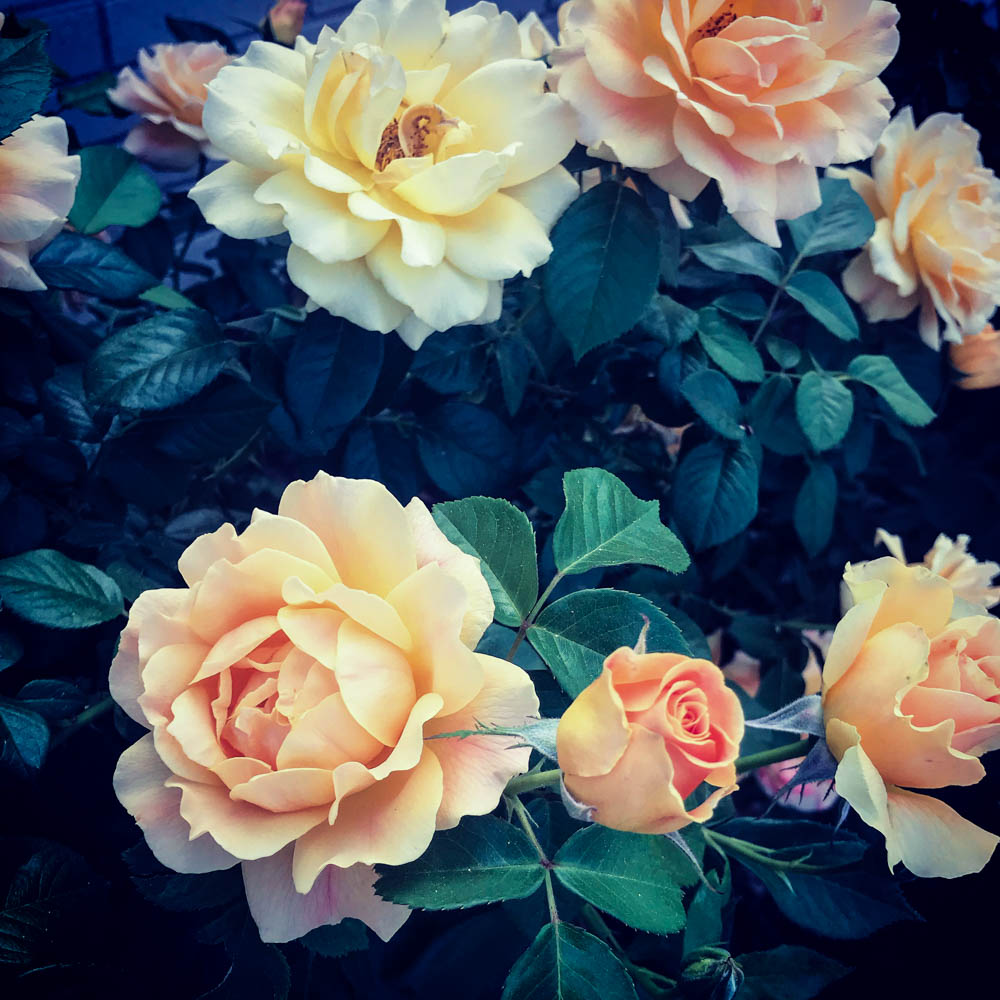 People in Colorado grow roses. It’s hit or miss whether they will last the summer out.

The hail shredded my roses and as did others who had been hit, I spent the next few days in mourning. Lush flora had been replaced with bare stalks — Dr. K’s comment that our plants now looked like Charlie Brown’s Christmas tree didn’t go over very well. But there was also support, both face-to-face and on social media, with people suggesting ways to encourage plant and garden regrowth. They said it was early enough in summer that we could still expect to enjoy blossoms and vegetables. So there was healing, and there was reassurance that we — the idyllic gardeners — were not alone. 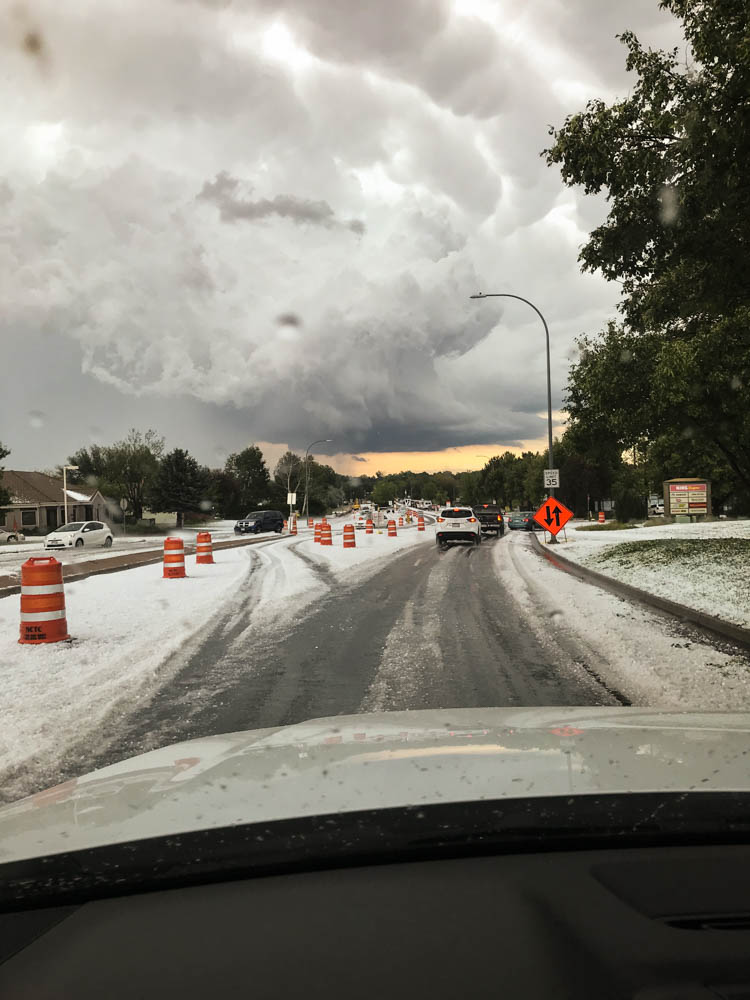 Hail storms like this one are what keep Colorado gardeners on edge. Will it or won’t it destroy gardens this time?

That sense of connection happened again without me even stepping away from my desk chair.

A friend from high school posted his senior yearbook picture on Facebook, using it as his profile. I thought it would be fun to challenge others from our high school to do the same as a way to celebrate the Fourth of July.

I was astonished by the number of schoolmates who dredged up their senior photos in response. Over the next few days, some used cell phones to capture old photos from yearbooks, others found printed pictures framed and hanging on the walls of their parents’ homes. We swapped adult avatars carefully selected to represent our adult selves for ones created over 35 years ago by a stranger, someone behind a camera who had been paid to capture our youth at a single moment. Others who hadn’t grown up with us joined in, threaded together via Facebook’s sometimes odd algorithm, also sharing a filament of their earlier selves.

Intended as a game, the memory-tugging exercise became one of animating reconnection.

I think part of why it occurred was seasonal. Independence Day used to be the call to reunite after we students dispersed for the first month of summer vacation. After Memorial Day, classmates drifted into summer routines: lawn mowing jobs, pizza or (in my case) flower delivery, or working for fast food joints. Summer days were different from school days when we connected passing back and forth in the school hallways, lounging on the grass outside the building during lunch break, or at sports events. For a month, there had been a lull.

After graduation from high school, everyone dispersed. Many of us have reconnected through Facebook. But in posting those pictures for the Fourth of July, we experienced a regenerative moment.

In those photos captured long ago, we looked hopeful, proud, and eager to take on the world. The photos pulsed with vital energy. It was our turn to test new ideas.

Connecting with old friends came at the right time in life, not only because we are over 50, but because people in America are so isolated today.

We see this isolation in the recent high profile suicides of Kate Spade and Anthony Bourdain, we see it in how the country is polemically divided. We see it in how we prefer to communicate by text and email rather than picking up the phone, as if hearing words spoken in a human timbre may change our minds and make us identify with another person. We don’t want our minds to be changed. We want to live according to our own ideas, in solitude, lest we come into contact with ideas and ways of life that are different from how we have chosen to exist. We look away from others because something about them makes us uncomfortable.

And when we do come into contact with an idea to which we don’t adhere, rather than considering it, we belittle it and the person who said it.

You might say this is fine. That there isn’t a problem with having individual ideas of the way the world should spin. Things are going along quite well.

But in our individualism, we lack balance. In comfort, we relinquish what is right. We relinquish the once-lively interchange of ideas that made Americans as a people great.

Some years ago, we were in a taxi headed to a hotel in downtown San Francisco. As is so often the case in January, the city was fogbound and the night time landing had been a tense one. San Francisco’s airport is notorious for its near-misses and runway crashes. On the drive downtown, I could see equally spaced pinpricks of light cascading over nearby hillsides, as if one of those mesh light nets you can decorate evergreen bushes for the winter holidays had been gently draped across the city’s hills. After the harrowing landing, it was reassuring to see the spots of steady light. It was a reminder that there were others out there in a world that was stable.

So, as a challenge, what if we were to once again post our fresh-faced selves for the world to see. Let’s post — metaphorically speaking — some of that vital energy from years ago. Don’t simply post it on Facebook, that platform is too limiting. Take those fresh-faced teenagers who were going to change the world, one good deed at a time, and shine the light. We can create a network of lights to show the world who we are as a country, and as people who care about others. 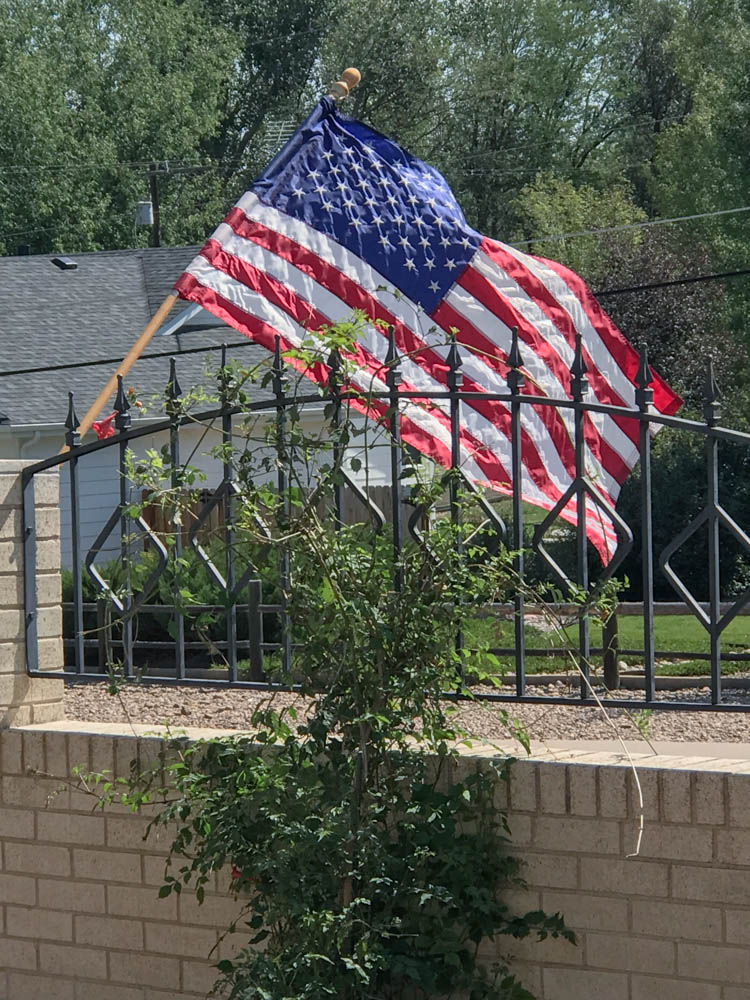 And then talk with people. Even if they’re different. You may discover similarities. And in that way, we might be able to work in tandem.

Oh, and in case you’re interested, I cut my roses down to their roots. They’re growing back already. Determined little buggers.

DIY Frosé – How to Survive Summer

I suffered for you too. I hate when any damage is done
I’m glad the roses are making their comeback

Insightful and beautiful, as always!

That failed presidential campaign in 1872 was a portend of what happened in 2016 when Trump was elected.
Disheartening, isn’t it?
Nice article though.

There have been a few “rose regrowths” since Horace Greeley’s failed campaign. Don’t you think Roosevelt was good for the country? Some elements of Clinton? Obama, surely. There’s always backlash from the opposing party. But at least there has been a balanced conversation rather than the suppression we’re seeing today.

Yes- an ongoing conversation to say the least