I am married to an obsessive-compulsive vacation planner. He is unable to go on a trip without making plans for the next one. I’ve tried to get him to relax, but that’s how he’s wired.

As we sat in an airport bar last January waiting to board a plane to San Francisco, Dr. K told me we had to book a hotel in August in Casper, Wyoming. The hotel had to be booked right then and there. As in, before you finish lunch, Emily. I looked at him quizzically over the rim of my martini, begging him to come clean. Casper, Wyoming isn’t exactly the most happening spot on the globe.

But it would be, Dr. K promised, particularly the weekend of August 20th, right before the projected once-in-a-lifetime event — a full solar eclipse would take place across a wide swath of the United States and Casper was situated on the line of totality.

I yawned. It was Casper, Wyoming!

But he was adamant. It was close to home, not somewhere in the Antarctic or middle of the Pacific Ocean. He’d already researched the whole thing, from where to stay in the path of totality, when to leave home in order to escape the certain hordes who were to converge on the town and ten — yes, ten — alternate routes. Compliant wife that I am, before lunch was over — and between martinis — we roamed TripAdvisor and learned that Casper was solidly booked the weekend before Monday morning’s eclipse. The next, best viewing option was Glendo, spending the night beforehand in Cheyenne, 101 miles away. Glendo, a town with a population of 205 and the motto, “Small in number, big in heart,” had no idea in January how both its numbers and motto would be tested in August. The town figured it out while accommodating over 130,000 dark sky lookie loos, becoming Wyoming’s Party Central for all the other geeks like my husband who had to see two minutes and twenty seconds of darkness at noon. Glendo’s big heart notwithstanding, they’re still short of funds on the Port-A-Potty invoice, if you’d like to chip in.

I booked a generic Cheyenne hotel room, nothing fancy, not even room service, at a whopping $370 for one night. That’s three times the normal room rate. I was beginning to see stars whirling above my head at the thought of capitalism preying on a star-gazer’s bonanza. 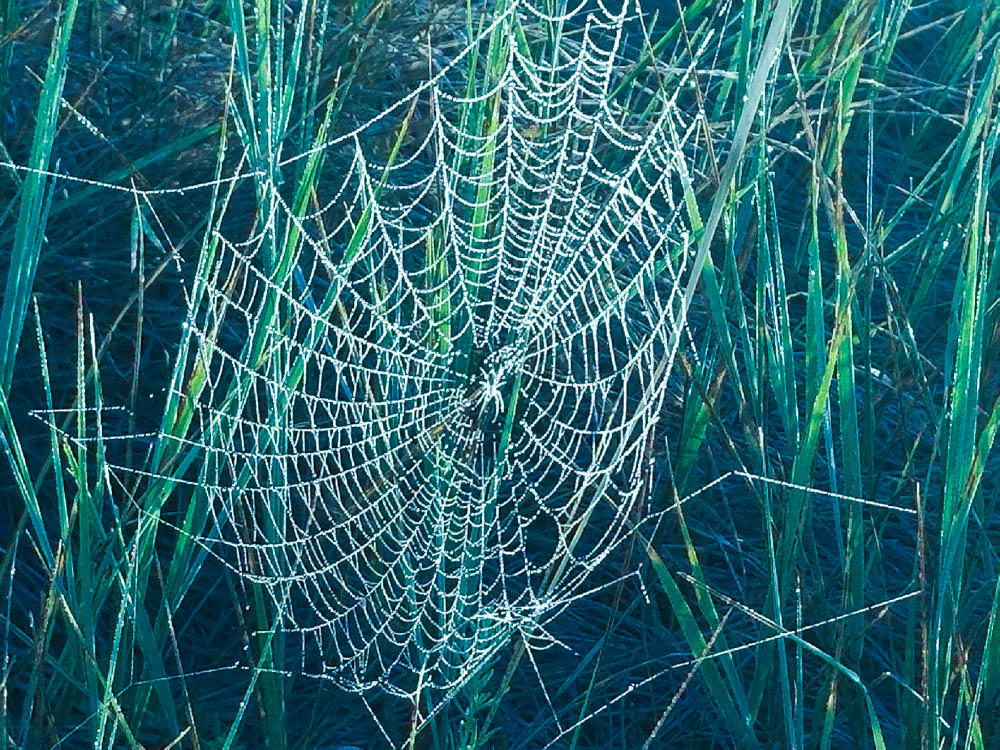 Both spiders and humans react in odd ways to a solar eclipse. Humans race to the ends of the Earth to see it; spiders think the premature setting of the sun has ended their day. Webs are spun in early morning light, only to be removed as the moon slides over the sun, sending skies into brief twilight. Spiders may not eat on eclipse days. Photo: Ty Tobin

You have to realize, I had no intention of actually looking at the sun. My Dad had warned me about solar eclipses, back when I was a kid, back when I think we had one, or a bit of one. “You don’t want to burn your eyes by looking at it,” he’d cautioned, and I’d listened.

Rationalities of science aside, there was fear, a fear generated by the thought that what the earth and nature can do to humans is a great unknown. Science can be as rigorously scheduled as the precise time and latitude when the moon will slide over the sun and create a visual spectrality, circumscribing its brightness for a moment in time. And we humans are capricious beings, interweaving whim and fancy between perceived truths.

For the remaining minutes we had until the plane to San Francisco departed, Dr. K educated me on the science of eclipses. I began to understand that while intense sun rays could damage a human retina, there would be a brief window of time when it was safe to view. And he’d already bought a package of ten special eclipse glasses to watch the process until totality. Offered at a once-in-a-lifetime price of $20, he couldn’t resist. He gave two pairs to my parents, too.

I still had my doubts. And on the Saturday before the Sunday before the Monday, Dr. K panicked. All roads to Wyoming would be unmanageable; it was reported the state would double in size during totality. I would have to inform friends we’d pulled together for an Eclipse Party — because what else are you supposed to do when presented with a package of ten eclipse glasses — that he was changing The Plan. No matter that friends had scheduled their weekend to arrive at a certain point in Cheyenne and partake. And besides, they were bringing the fried chicken!

For me, there was a glimmer of hope in the race to darkness. Maybe we wouldn’t go after all. Maybe Monday could be Monday and the sun and moon could have their little showy-off event and then everybody could get back to reality. For how many eons had those orbs been having their little dance, anyway?

But best-laid plans always have an ugly stepsister.

Glendo’s ugly stepsister involved a 1 AM Monday morning wake-up call, to be on the road at 2:00 AM sharp for a drive to Scottsbluff, Nebraska. It seemed the sun would be shining there on Monday morning, too. Pacified with fried chicken, friends and beer, I agreed.

Human indecision begets change and after some negotiation for half an hour of additional sleep, there were now only three of us in the car headed north. Wide awake in the dark, we nibbled on warm breakfast burritos doused in green chile, mesmerized by flashes of white on black as the wheels drove us north. Conversation turned from food to fact and we learned that Scottsbluff wasn’t in the path of totality. We had avoided the traffic only to lose sight of the goal. 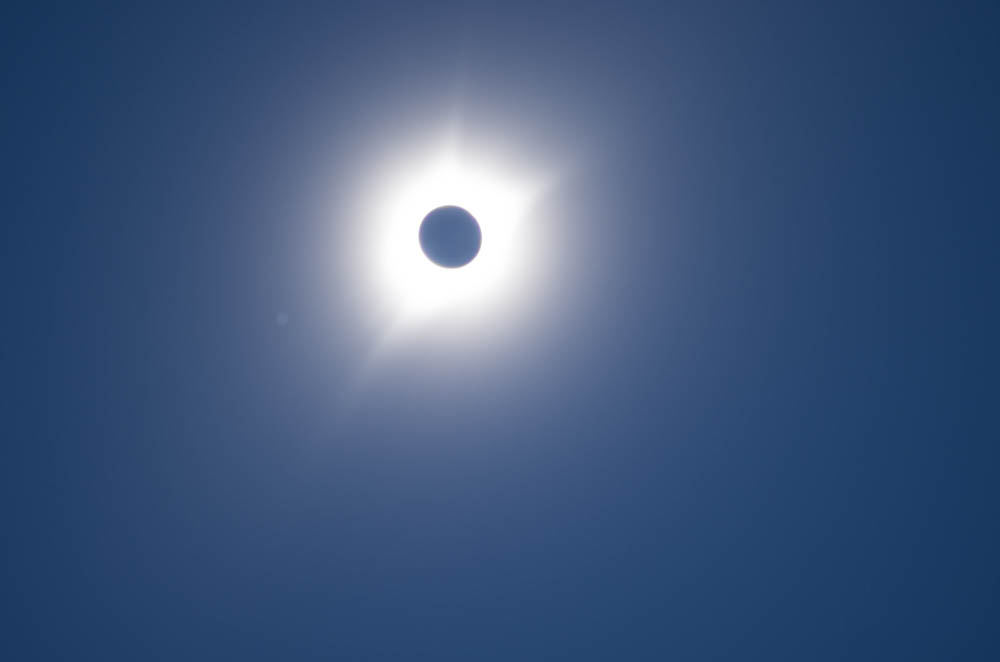 Seeing a solar eclipse in totality is a chance to participate in an otherworldly moment of silence. Nature and man stand still, awed by forces beyond our control. Photo: Doug Kemme

Our back-seat companion was a life-long Boy Scout. Quiet and reserved, Ty and Dr. K compared notes, discussing fog and clarity, and reached the conclusion that if we were in it for a partial, we should go for the total. That entailed another 40 miles of driving.

They looked at me, the naysayer; would I go for more? Particularly since I hadn’t wanted to go for any?

There was something about the challenge of the unknown that had awakened my interest. And when we pulled into the parking lot at Agate National Monument at 6:05 AM, when the park rangers closed the lot gates to more cars at 6:20, my enthusiasm matched the others. If we had stayed in bed minutes longer, we would have missed the chance.

It was a day filled with science — human, animal, plant and the workings of the heavens. 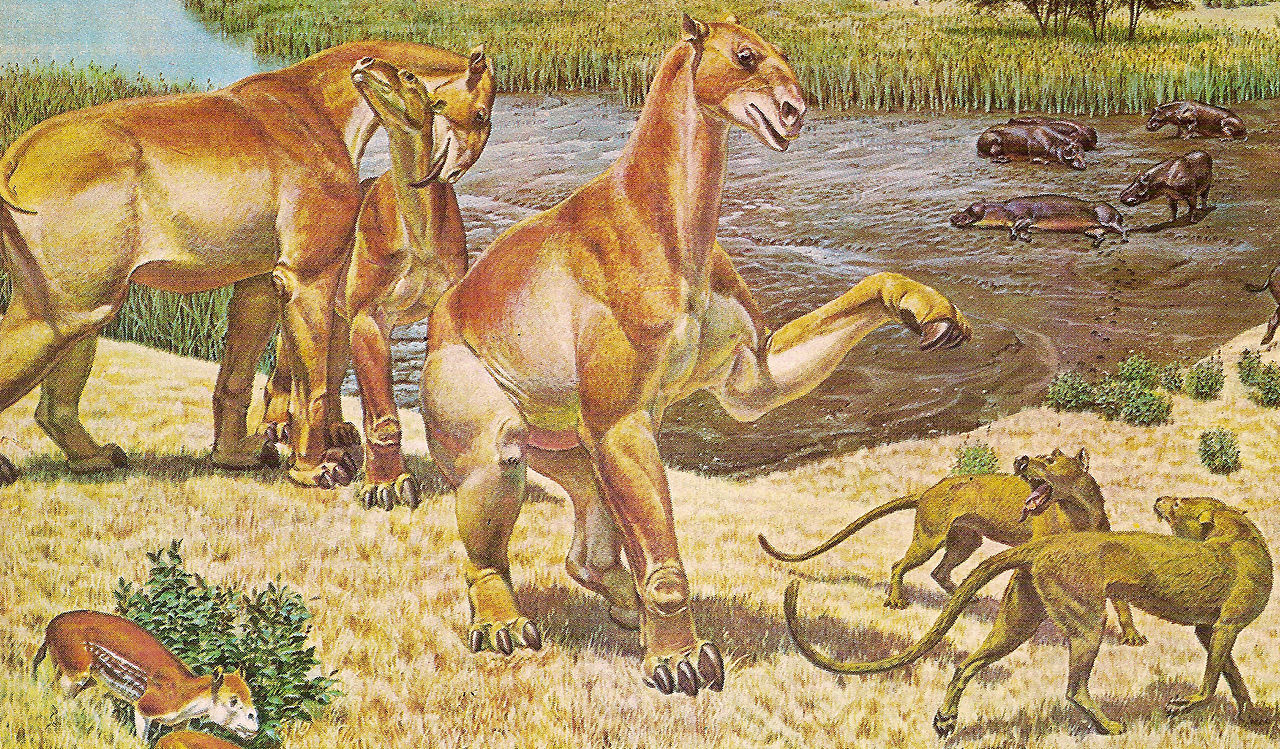 Instead of hordes of people, we landed by a realignment of purpose in the relatively quiet Agate National Monument where prehistoric history surrounded us, ready to teach the story of our combined past. Moropus paleoart mural by Jay Matternes, Wikipedia. Public domain.

During totality the sun was defined, its brilliance captured for an instant within the confines of the Earth’s moon. Where there had been a bleary glare, there was a crown and a flash of diamond-like clarity.

The timing and orbit were scientifically defined but we humans were not. Free to dither and perseverate, we analyzed and considered, worried and wondered, ultimately going with a gut decision that luck won out.

And for me, what had been cloaked in fear ended up a day of enlightenment and learning, one step forward toward understanding Earth’s primordial presence and the celestial bodies that interact with us.

Even if I did have to get up at an un-Godly early hour of the morning — no, let’s just call it what it was — a hair after midnight.

To view the 360 VR video of totality at Agate National Monument, use your smartphone with the YouTube browser. Video credit: Doug Kemme

Steak with Shiitake Mushrooms and Jalapeños

One of your best! Love you!

Thank you! Love you, too.

I am going to get her book; interesting and funny.

We used the less-than-wonderful cereal box viewer method until a friend called and said to hurry over, that she’d scored a pair of the glasses. We had only 90% here, but it was spectacular to see, and we’ve learned that during the 4/8/24 eclipse, our town will be smack in totality. We will be taking reservations for camping in our backyard. (What do you think? $300/night, $350 if you insist on coming in to use the bathroom? Something quite reasonable like that?)

I think that is quite reasonable, but if you would consider negotiating that we bring the glasses (Doug has most likely already purchased them) and a case of wine, would that qualify us for (a) bathroom privileges and (b) a bed inside your home? I even cook! Just tossing the idea out there. . .