Ever since I jumped into the roiling waters of the Twitterverse about a year ago (feet first, nose plugged in disgust) I’ve been dog paddling, making tepid attempts to ride its waves, trying to conform and find solid ground in this fanciful world. Once in a while I submerge, add a few followers, then frustrated with the time the social media platform eats up, drift off to the side of the pool, hugging the ladder, willing myself to take the plunge again into this Brave New World of silent conversation, and make the experience less superficial. There were a handful of total strangers with whom I made meaningful contact; we exchanged messages, and I learned a bit more about these supposed humans on the other side of my iPhone screen. Much as the days of yore when we wondered whether the little men dancing around inside that box called a “tee-vee” could possibly be real, I consider my follower’s avatars, contemplating how these images express their opinions about Earth, evaluating the purpose of it all.

One afternoon a few months ago, I messaged back and forth with a new follower.

“I’ve been having a real conversation with a Twitterer,” I told Dr. K at dinner. “He’s a New York Times reporter and he wrote that article we read about the meanings behind people’s passwords. You remember the one, where he described evocative passwords as ‘the tchotchkes of our inner lives.’”

“You didn’t tell him your passwords, did you?” Dr. K eyed me suspiciously; my silence supplied the answer. “You realize that giving a total stranger your password is no different from having a secret handshake to get into your front door. How many algorithmic possibilities exist for shaking hands?” he asked.

“He seemed sincere enough, and a nice guy. That’s why I told him all my passwords referenced my collies, in some way.” Dr. K shook his head in disbelief.

But the truth behind the conversation was that although Ian Urbina was curious about my passwords, hoping to obtain followup stories for his already-popular article, the back-and-forth exchange on Twitter had unlocked a door.

As Ian and I visited in Twitter’s virtual coffee shop, the pin-and-tumbler mechanism in my mind began to click, pins slowly easing into position, unleashing new thoughts. Dr. K and I share our home with the second of two sets of collie sisters, convinced early on by our first dog, a mutt from the Denver Dumb Friends League we named Molly, that the one-eighth share of collie blood was what made her the sweetest dog we’d ever met. When Molly moved on to the big couch in the sky, we began our search for full-blooded collies, reasoning that if one-eighth created a wonderful animal, an AKC Collie could only be that much better. That’s when we discovered that collies are hard to find.

The collie as family pet has dwindled in our society, whether because there are only a handful of quality breeders, or because the dogs have an abundance of hair that requires brushing, and need something we may not be able to give: our time. Woodcut-style photo courtesy of D. Kemme.

The first set, a couple of farm girls named Lucy and Ethel, were the result of a whoops: the biological urges of Dad got the better of Mom’s not-so-subtle and hormonally driven charms, who was on the other side of a supposedly sturdy fence designed to keep Dad out. Lucy and Ethel were good dogs, but both succumbed early in their lives to epilepsy.

We searched for certified breeders, and found that in Cook’s Collies, bringing Flopsy and Mopsy into our lives. Beautiful animals, they evoke reminiscences from anyone who meets them. As a collective memento of the past, the breed pulls out stories of similarly beloved dogs. So many had a collie in their lives, at some point, and the remembrance of these loyal, loving, and regal dogs tugged at heartstrings. People shared photos on Facebook, and collies of days gone by surfaced in conversations.

I posed the question to my new Twitter friend: if the collie had been so popular when I was growing up, what made them so scarce today?

It wasn’t as simple as I had thought, because there are collies for show, and then there are working dogs. The American Farm Collie, the Sheep-Dog, Scotch Collie, and simply the Collie, are all historically accurate names for dogs that have existed since the middle ages. Bred to herd sheep and watch over their human families, particularly the youngsters, there is a mystique associated with the breed, but even so, the glorified Lassie movies didn’t get it wrong. A branch split off during Queen Victoria’s reign; mated with the Russian Borzoi, these are most likely the show dogs we think of today. These dogs are also loyal to their last breath, and live to serve their owners. But whether bred for work or show, collies like to have a purpose. 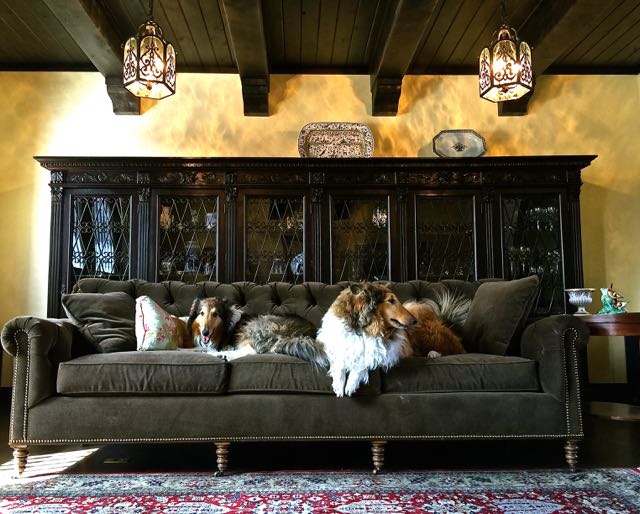 Flopsy and Mopsy clearly are not working dogs.

Since the 1950’s, the Farm Collie has slowly disappeared, supplanted by machinery, and the depletion of farmland. As more people moved to urban environments, away from the land, the need for the collie lessened. Our lifestyles have changed, never more so than with the advent of the Internet, bringing with it a fast-paced, breathless existence. There is no leisure time left in our Twitter-driven, social media obsessed lives to brush dogs with overabundant amounts of hair.

We tell ourselves we are connected, but to what?

Oh sure, the yarns go that back then, kids had to walk to school instead of drive. There were chores and tasks required at home, one of which was to brush the family dog, who repaid us with unending dedication we could see in her loving, brown eyes. Today, rather than interacting with live organisms, we have a button on Reddit which, if pushed at the optimal time, awards us coveted virtual standing, the hallowed yellow flair. Known by the code name /r/thebutton/, as of today there have been 862,792 participants competing in this virtual caste system. You only get one chance to push the button, one opportunity to achieve fame, one chance to flame out, to be a lowly purple. According to Vox, “The button is powered by two of the most powerful forces in human societies: status competition and boredom.”

Is the collie the canary in leisure’s coal mine, the harbinger of the end of meaningful living?

It’s springtime, which for me means it’s wet dog season. I sit at the kitchen table, trying to sip coffee and read the newspaper, another purportedly antiquated relic I enjoy. Two 60 pound beasts with pointy ears and even pointier noses slam into each other, racing around the table playing a game of chase, attempting to find greater purchase of the other sibling’s fur. Collies are a remnant of life before social media, before television, when there was leisure to let your mind wander.

I watch the two dogs, egging them on with an occasional, “Go get ‘er,” to refresh their race. Listening to their conversation, their Wookie-speak, steadying my coffee mug every time a collie hip checks a table leg, I realize they’ve provided a spark, lighting Twitter’s murky brine so I may still find illumination. As long as I keep following the clicks my mind makes, unlocking itself from perceived stifling and a Huxleyian variety of conditioning, as long as I permit it to wander aimlessly on whatever path it chooses to tarry, creativity won’t be snuffed. I’m beginning to see that the faces behind the avatars are usually just humans that are decent and likable.

There is the possibility of life in Twitter. Brave New World, indeed. 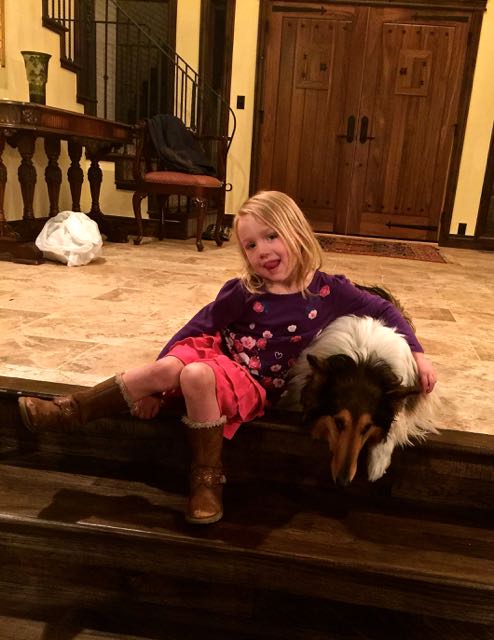 Every collie needs a kid to hug.

Have a good password backstory to share? Ian Urbina is still reporting about password stories, except please only send him passwords you no longer use. Reach him at urbina@nytimes.com.

I, too, have been dismayed by how hard it has been to find another Collie! I have had them since I was a little kid – the first dog I can really remember. I also grew up on Lassie Come Home, Lad and the other books by Albert Payson Terhune! While on a search for another Collie I found Cook’s Collies. I found this blog while checking out reviews on Cook’s Collies as I wanted to make sure I was finding a good breeder and caretaker of the Collie breed. Your experience, and other reviews I have read have served to [re]assure me about Cook’s Collies and I am now in the process of buying one of their dogs. I soon hope to have another one of these great dogs in my life. Thank you.

I’m glad to have helped! We love our two Collies and thought Cook’s was great to deal with. They clearly love the animals and had a hard time handing over our puppies! It’s not just a place where they breed animals. Our two are eight years old and aren’t having the health issues our previous pair did (epilepsy — a horrible way for a dog to live/die). We’re planning to get two more Collies from Cook’s when the time comes. I’d love to see a picture of yours when you get it! Post it as a comment!

The next time you need a set of dogs and Collies are hard to find, Shelties are smaller and also wonderful. Love your writings. Happy Mother’s Day and have a super week.

Shelties are beautiful! Mother’s Day was great, although snowy . . . again. I hope yours was nice as well.

Loved this thought provoking blog Emily! Interestingly, my papillon takes part in many of my passwords.
I would love to find another papillon but AKC has made them into little tiny dogs that have some health problems. Looking for a big pap. Beautiful pictures of your collies! Really liked the one by Dr. K. Haven’t taken time to twitter.

We are fans of the Standard Poodle breed. Animals bring so much to our lives. We also have a Bengal cat. These two creatures bring us joy and loads of entertainment. They are worth the work!

“meaningful living”. What does that really mean anyway. A farmer plows their field and feeds thousands but if he doesn’t like farming, are they living a meaningful life? If a painter paints but never sells a painting, but loves every second of it, do they live a meaningful life?