Refreshing lemon juice and a good dose of Cointreau make a new twist in this variation on a theme of what can go into a martini glass. The Lemon Drop Martini, perennially popular and oh-so-potent. 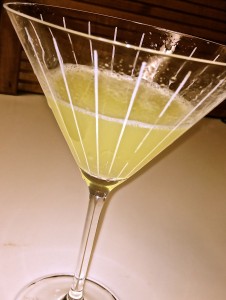 Refreshing, yet deceptively potent, Roger’s Lemon Drop Martini helped us change course when our vacations plans were dealt a wallop by Superstorm Sandy.

Pour vodka, Cointreau and lemon juice into cocktail shaker and shake with ice cubes until outside of shaker becomes frosty. Serve in martini glasses with superfine sugar on rim of glass. Garnish with a thin slice of lemon.

WARNING:  More than one of these can be mood-changing, and life-influencing. You never know where it could lead.

*AND UPON FURTHER STUDY:  This recipe sent me to the internet and the Oxford English Dictionary to figure out what exactly Roger meant by a shot. I discovered this bit of information:

Outrunning Frankenstorm. Living On the Edge of Insanity

Cranberry Daiquiris For a Crowd

DIY Frosé – How to Survive Summer

Nice to Meet You, Vermentino

Aquavit’s Invitation to the Cocktail Party

Emily, What a fun read! We just love your writing!
Sylvia