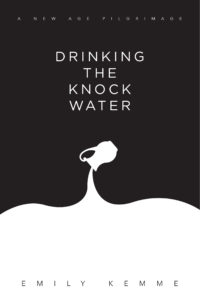 Buy Hardback or Kindle Copy of Drinking The Knock Water:

“We all live with ghosts. . . Some are those of people who’ve never been born.”

So begins Drinking the Knock Water: A New Age Pilgrimage, the second novel by award-winning Greeley, Colorado author Emily Kemme. Loosely based on Chaucer’s Canterbury Tales, the novel takes on life itself as a pilgrimage. One of life’s biggest struggles is fitting in with the rest of the human race, and an aspect of that is having children. It’s not meant for everyone and yet, true to Darwinian forces, it’s almost expected. Giving birth and then raising a child to maturity is one of the bravest tasks we take on.

With the Fertility Tour only weeks away, a group of unlikely and disparate pilgrims look to fertility counselor Holly Thomas for guidance. But another cruel outburst from her sister-in-law on what was supposed to be a day to celebrate began a downward spiral of events that would leave Holly questioning every choice she’d ever made and every belief she held as truth. Holly’s life has unraveled in ways she could not have imagined, including a restraining order against her. Will she be able to find her footing and make peace with her choices and herself? Had she done the right thing by her unborn child? Had she given enough, or too much, freedom of choice to her son? Did she truly, deeply know her husband and clinic partner, Roger? And what right had she to counsel infertile couples after her own pregnancies? Will visiting religious and sacred feminine sites in England help her regain control or only tear her further apart?
Named a FINALIST in the CHICK LIT category by the 2017 NEXT GENERATION INDIE BOOK AWARDS, this is a breathtaking novel about family drama and social criticism, written in the tradition of Jonathan Franzen, Anne Tyler and Jeffrey Eugenides. With searing honesty, Drinking the Knock Water takes readers on an emotional pilgrimage through the relationships that make us who we are.

The US Review of Books:
Deeply traumatized after her daughter, Arella, is born dead, fertility counselor Holly Thomas struggles to achieve inner peace. Roger, Holly’s supportive husband and a prominent fertility doctor, accepts her grief-induced eccentricities, but his intolerant Christian family resents her and her Jewish roots. When Edward, Roger’s brother, openly belittles the Bar Mitzvah of Daniel, Holly’s son, tensions escalate, and her whole world threatens to fall apart. To overcome heartbreak and reflect on self-discovery and relationships, Holly and Roger take a group of patients from their clinic on a fertility tour. This tour becomes a spiritual pilgrimage for unrealized truths.
As Holly and Roger take their chosen couples on a fertility tour to England, various colliding elements within the patients’ lives emerge, thereby projecting how relationships bless or burden us. Pain becomes a recurrent theme in the novel, neutralized by the healing touch of water as a metaphor. Arella’s grave is near water, and the visit to the sacred sites of England serves as ritual cleansing for the characters. Artistically nuanced language and the sincere, soothing tone bring out the true beauty of this literary novel. This is an introspective, gentle novel that illuminates and rejuvenates in the same breath.
RECOMMENDED –The US Review of Books
Fertility doctors confront the lingering effects of personal and cultural emotional trauma. Holly and Roger Thomas have a stable marriage, fulfilling careers, and a son practicing for his bar mitzvah. Holly insists on throwing a birthday party each year complete with gifts for their stillborn daughter, but Roger doesn’t complain. His Catholic brother and sister-in-law, however, find fault with Holly, primarily because she’s Jewish. Her religion haunts her, almost as much as the death of her daughter. . ..
. . . the author often beautifully depicts Holly s self-doubt as she explores different aspects of overcoming trauma. . . [in a] positive tale of moving forward through unexpected circumstances.
–Kirkus Reviews

Drinking the Knock Water is one of those books you can’t put down and when you do, it still stays with you. I could so identify with the emotions that Holly had to deal with in the story. Especially her in-laws. Talk about opinionated people who think they are always right, and who think they have the right to point out your failings!
Though I’m not someone looking for fertility treatments, I do want to go on that pilgrimage Holly leads her patients on. To wander through historical sites in England sounds like it would soothe the soul, certainly the soul of a woman trying to keep up with the expectations of the world around her.

The book is filled with rich sensory details of New York, upstate country living, family life, prison (yikes), and historic sites in England. I felt I was there with Holly, especially when she had to drive a finicky stick-shift van in England, and on the wrong side of the road.
You can tell the author did her research because it reads as authentic. I highly recommend this novel.

Buy Hardback or Kindle Copy of Drinking The Knock Water:

Please leave a review on Amazon! Purchase of the book through Amazon isn’t required to review on that site.