Making plans to take a vacation can be fun, but actually going on one is a lot of work. Much like anticipating a three scoop ice cream cone or looking through a Christmas catalog, planning a vacation doesn’t take into account the actual doing of it. The catalog’s Norwegian sweaters appear to be sporty and stylish, yet don one and you’ll discover it’s a bit like wrapping a large, hairy dog (in my case a collie) around your shoulders. Yes, Norwegian sweaters are beautiful. All the intricate designs! The cute reindeer! The scrollwork on the metal buttons! In reality, they just itch. And those three scoops of Haagen Daz? I don’t have to tell you how fattening they are.

Going on vacation is much the same. It sounds great at the time, but getting out the door can be hell.

That’s because going on vacation requires organizational skills and time on your feet — doing the laundry, packing suitcases, and making sure  (a) you’ve arranged for mail to be picked up; (b) cancelled the milk delivery; (c) donated the newspaper to the schools for kids to (1) read or (2) protect the tables from finger paints; (d) arranged for a plant waterer; and (e) boarded your dogs while avoiding their pleading looks.

All this takes hours of time. Upon returning, the vacationer must repeat all these steps in reverse. You must:

€ Pour the spoiled milk you forgot to cancel down the drain, worrying if milk now the consistency of cream cheese will clog the pipes;

€ Decide whether the world can do without you reading seven days of accumulated, now yellowed, newsprint you neglected to donate, or if it is a crime against the environment to toss the newspaper;

€ Greet parched plants and bereft dogs with an enthusiasm equal to the amount you have for climbing into your own bed.

To help you enjoy your vacation, here are a few travel suggestions so you can leave home, return rested, and be ready to clean up from vacation and get back to work.

Most cities offer walking tours to see where the famous and not-so-famous met their maker, or where their bruised and bloodied corpses were subsequently buried, their souls gone on permanent vacation to the hereafter. But walking in another’s footsteps to trace crime scenes, traipsing through cemeteries to inspect the gravestones of those who have earned the right to rest, and taking the opportunity to see the front stoop of the marvelous requires the tourist to walk. A lot. 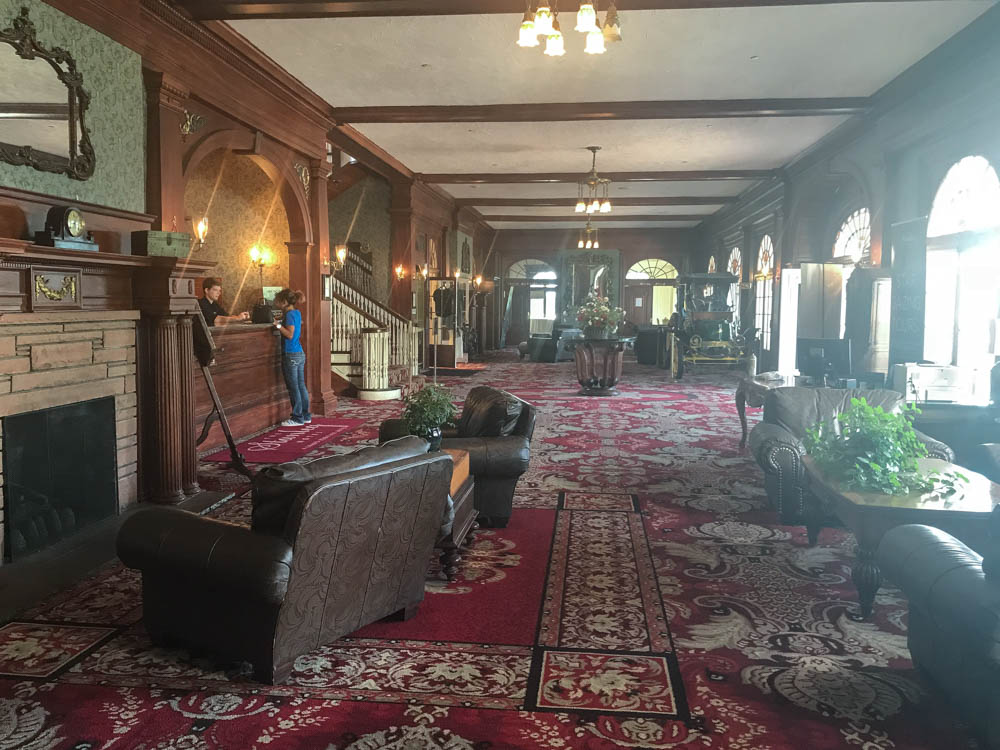 You can take advantage of the many ghost tours offered at the Stanley Hotel. Or make it easy for yourself and nab a comfy chair in the lobby and snap pictures. Then point to all the shadows and wisps of light, and count the ghosts.

Instead, visit the historic Stanley Hotel in Estes Park, Colorado, near the entrance to Rocky Mountain National Park. Don’t worry, no hiking is required to observe the determined ghosts who have reportedly made the hotel their home — at least since best-selling horror author Stephen King and his wife spent a late October night there in 1974. Taking advantage of both the hotel’s somewhat shabby interior at the time and imminent Halloween vibes, King concocted one of the most delectable horror stories you’ll ever read. Scenes from The Shining, and the film directed by Stanley Kubrick, still haunt me on occasion. 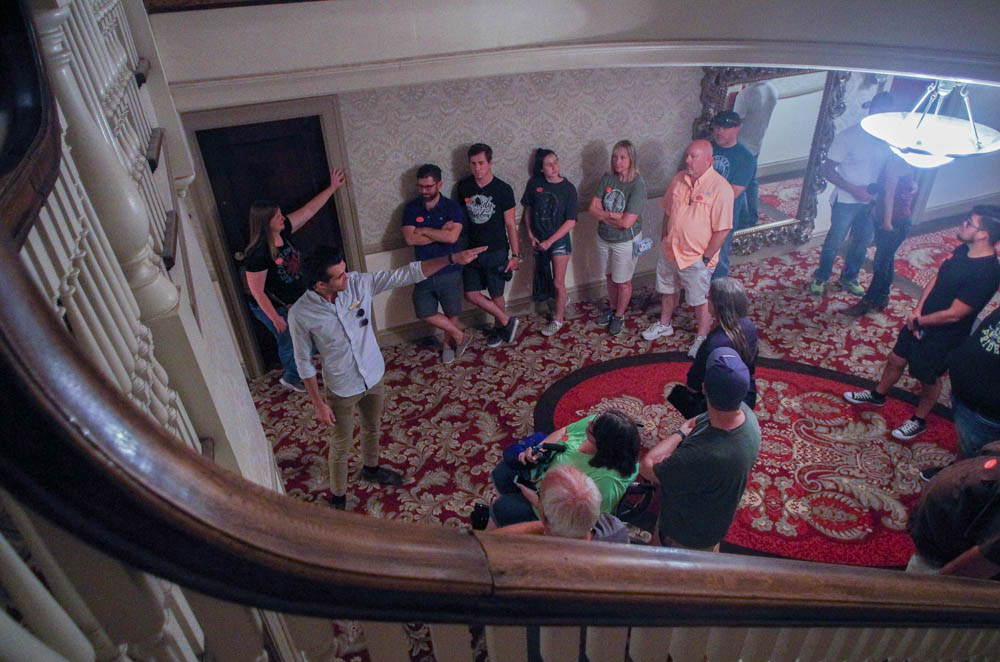 Tourists listen to tales of the beyond at the Stanley Hotel.

To experience the hotel’s ghostliness, all you’ll need is an iPhone and a dum dum lollipop. Sit in the grand lobby in the early morning or late at night after all the tourists have miraculously vanished. Snap pics on your phone and pretend there are ghosts lingering in the dappled sunlight or dark corners. If you’re feeling energetic, hike the stairs up to the Fourth floor, sit down on the floral carpet, and balance the dum dum upright on the palm of your hand. As lore has it, ghost children will play with you, reaching from the ever-after to snatch the lollypop. It’s a slow process. To make it more enjoyable, bring a tumbler of whiskey from the bar with you to sip.

Another of Colorado’s antique hotels, the Oxford was Denver’s first. Opening in 1891, and having played host to Theodore Roosevelt and the Dalai Lama, for some reason it has not been able to attract any ghosts, possibly because Stephen King didn’t write a book about it. But the Oxford is as leisurely a city hotel as you’ll come by, only 240 steps from Union Station where you can find restaurants, bars, shops, and trains, of course. I know it’s 240 steps from the hotel because we counted them one frigid night back in February. 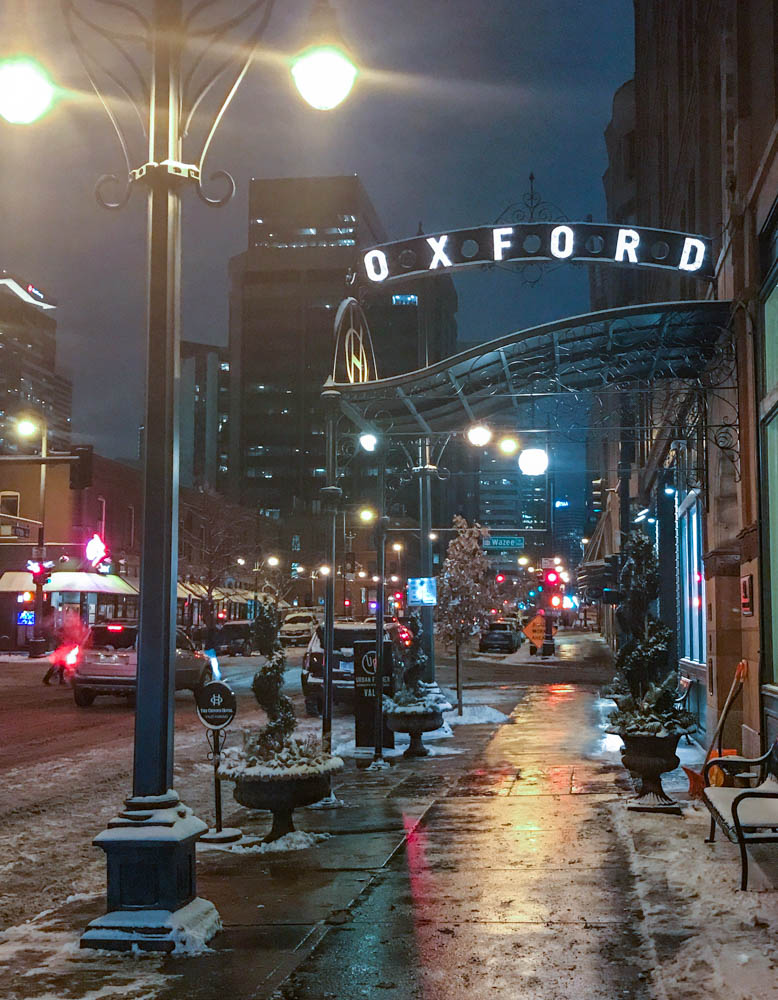 On a freezing night back in February we ventured from the Oxford Hotel to Union Station. It was only 240 steps. It was 240 steps too many.

But as with many iconic hotels, the Oxford offers room service, reading materials, and an iconic Art Deco bar with shimmery maraschino cherry lighting that plays tricks on your eyes. If the 240 steps are too much, venture downstairs, snag a curved booth at the back of the Cruise Room, and order a martini. Or several. At least until you build up the courage to return home after a good night’s sleep to explain to the dogs where you’ve been. 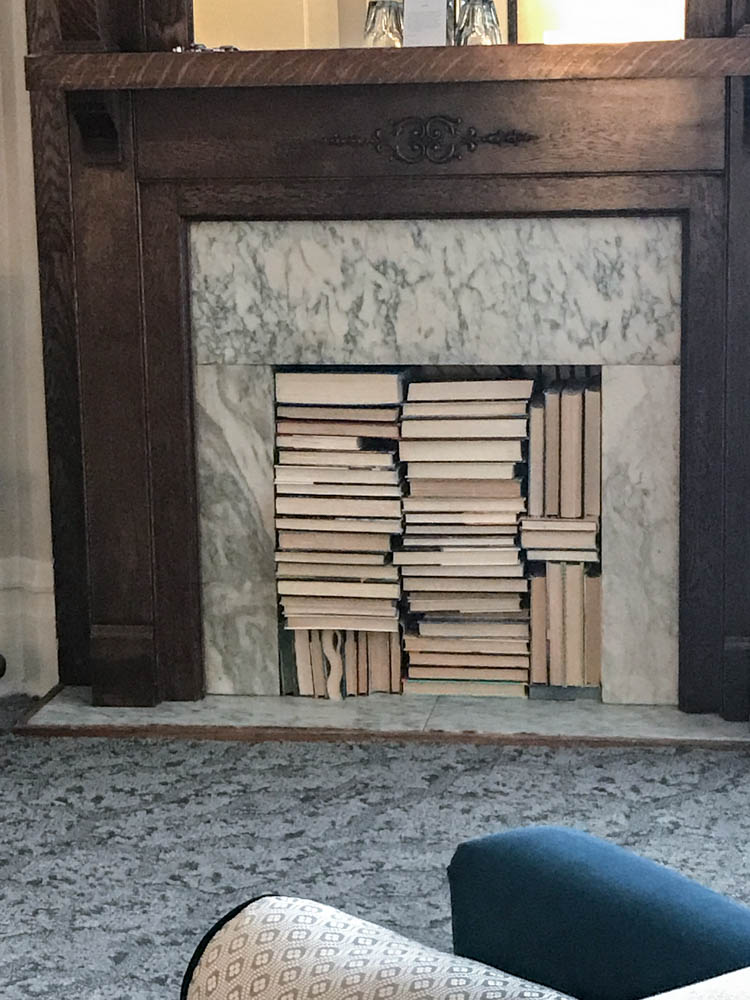 Reading materials at the Oxford Hotel are filed according to size and how well they stack into a fireplace. Remember, don’t judge a book by its cover.

If time travel without a capsule is your thing, Rocky Mountain Rendezvous is the ticket for you. Held each July since 2004, the annual reenactment of the Western Fur Trade era, c. 1820-1840, requires authentic period dress, but has relaxed the rules to include gear from the 1700s, should you find the Fur Trade era limiting. In case you’re wondering, tennis shoes, halter tops, bathing suits, and sunglasses will get you kicked out faster than you can say, “Lewis and Clark.” Unloaded firearms are permissible, black powder revolvers are not. No lanterns, flashlights, Coleman stoves, or cigarette lighters allowed. In case you haven’t figured it out yet, leave the collapsible camp chair with beer holder at home.

There’s plenty of firewood to build your campfire but don’t bring the chain saw. And a 50 gallon water tank with hose sprayer is just plain unacceptable.

If simply reading all the rules makes you tired, never fear. The 2018 Rendezvous has been cancelled due to fire restrictions. You’ve got a year to rest up and get ready for next year’s event, July 13-20, 2019.

Until then, I think I’ll go take a nap and think up excuses to tell my dogs why I really don’t love them.

Take half the clothes and twice the money.

As long as you don’t use the money to buy clothes, right? Because there’s all that laundry to do when you return home.

I always take too many clothes.

I do, too. There’s always the question of, “What if I need such-and-such for this activity?” and in it goes.

We are readying for poconos with the treasures !……d