The day after Thanksgiving I was up to my elbows in a turkey carcass. It’s a tradition, one which I have followed faithfully for years because the taste of turkey broth made from the dregs of the previous day’s feasting is divine. I could just as easily — much more easily, in fact — have tossed the carcass into the trash and opened up a box of chicken soup, but it wouldn’t be the same. 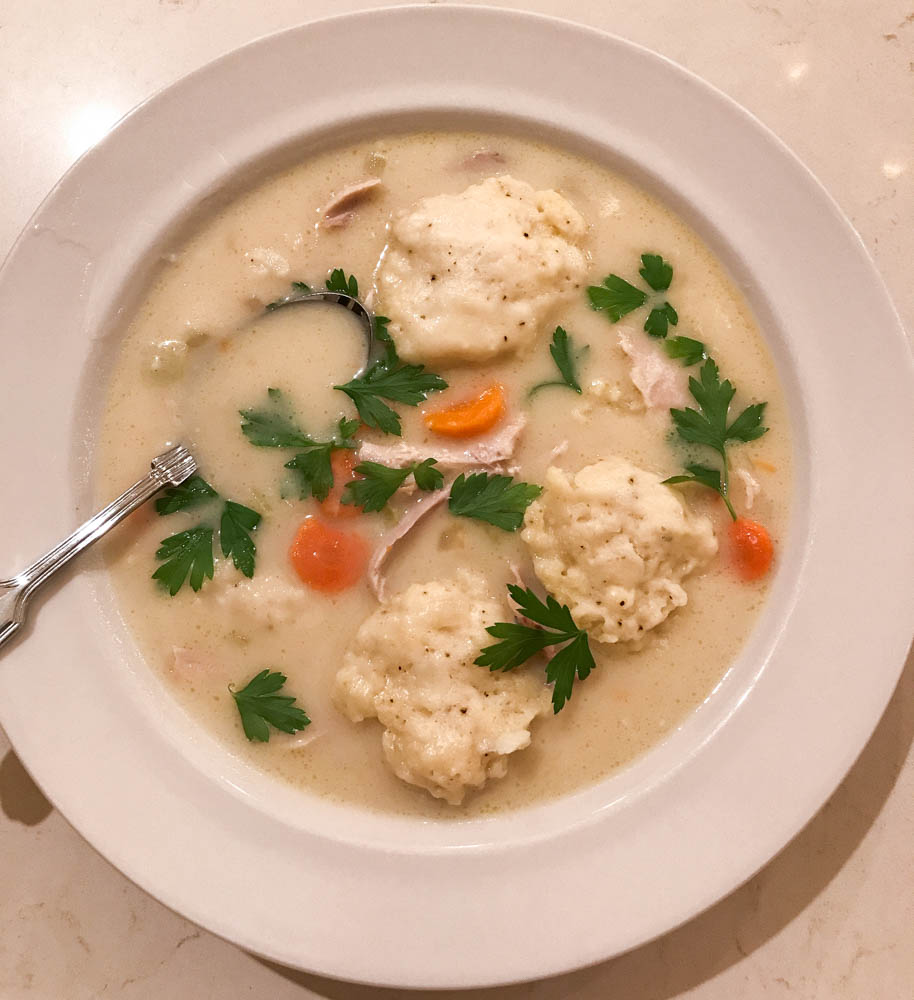 A turkey carcass is not simply bones. With it comes meat shreds, remnants of herbs, and if lucky, a bit of crispy skin to add a beautiful gloss to the broth. The rich flavors this combination creates recalls the experience of a cherished holiday. It brings with it visions of how that year’s turkey roasting progressed. There have been years where the skin crisped perfectly, the breast was as juicy as the dark meat, and there was banter around the table that spiraled into gregarious laughter. But there have also been tense Thanksgiving experiences. In 2017, the oven thermometer gave off false reads and we ended up cooking a bloody bird in bits and parts in the microwave. Family and friends hemmed and hawed — would, or would not dinner happen? That was not a Norman Rockwell, picture-perfect bird year.

But even the less-than-perfect Thanksgiving bird, once you add water to the stock pot and a few peppercorns, simmered on low for several hours, will gift a memory.

Many Millennials, Gen Z, and Baby Boomers alike hope to receive the gift of an experience this holiday season. Not so for Generation Alpha.

Thumbing through the newspaper inserts, I’ve been perplexed, looking at what the toy manufacturers are advertising as gifts for Gen Z and the younger ones, Generation Alpha — kids born beginning in 2013, or thereabouts. The Lego sets, the dolls, even the NERF Modulus Tri-Strike Blaster didn’t bother me. All of those toys foster creativity and channel playfulness.

But the Feisty Pets set my teeth on edge. 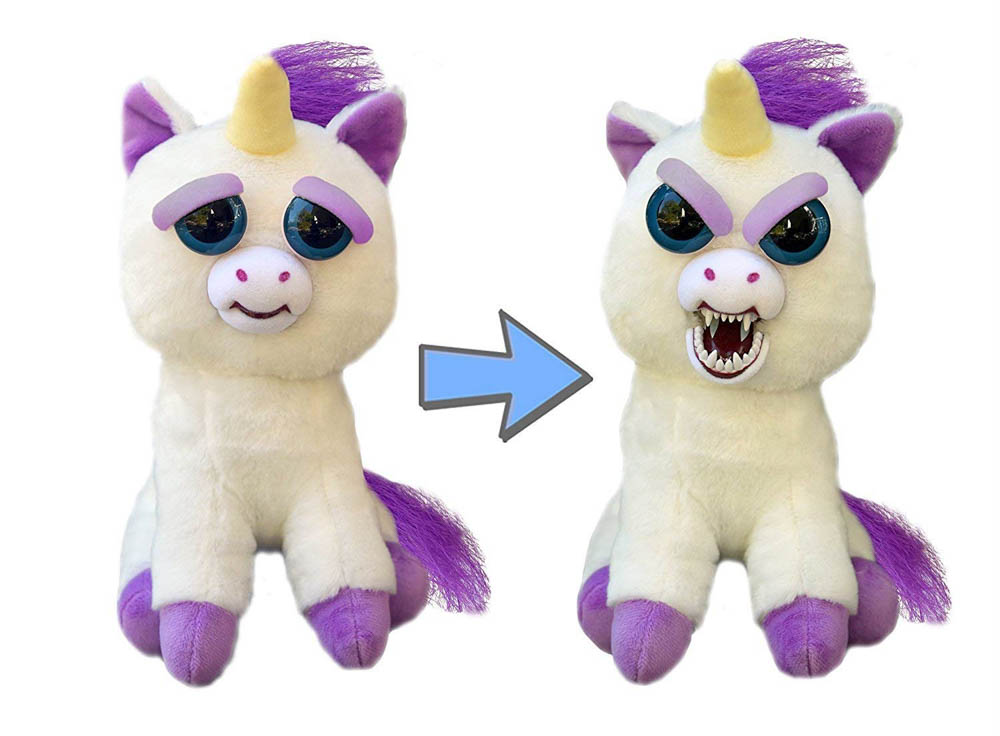 Glenda Glitterpoop is a nightmare of a gift. Squeeze her and the cute unicorn turns into a not-so-nice pet.

Glenda Glitterpoop caught my eye. She is a plush stuffed animal, a remake of the trendy but much loved unicorn, who comes with a unique and creepy twist perfect for your “creepy stuffed toy collection.” Glenda looks like the idyllic unicorn from fairytales gone by: golden horn, hooves, mane, and fluffy tail. But if you squeeze Glenda’s head, she turns into every kid’s nightmare, exposing shifty eyes and sharp teeth. Not into fictional unicorns and fairy tales? That’s fine. Instead give your kid Vicky Vicious, a plush bunny rabbit, who when squeezed (gently!) behind the ears, reveals herself as a first class  — umm, feisty vixen rabbit. “These endearing pets are great for cuddle time and to give your friends,” according to the Target website.

Even mom gets a nasty version of herself with Ginormous Gracie the Mama Giraffe. Gracie seems as equally perplexed as I am. Gracie has no idea how to control her offspring. But if you give cute Mama Gracie a (gentle, always gentle) squeeze, she’ll stick her tongue out at you.

I’ll admit I was curious when I first saw Glenda Glitterpoop. But after researching a bit more, and learning the plush stuffed toy was adamantly against ballon (sic) animals, world peace, and lollipops, I was less interested in whether or not her poop was sparkly.

Okay. It would have been kind of cool if she had sparkly poop. But she doesn’t. There is nothing sparkly about Glenda the Feisty Unicorn at all.

With toys like this on the market, it’s no surprise that Generation Alpha spurns tactile experiences of any sort.

That’s why unboxing videos are so popular.

Rather than risk squeezing a stuffed animal that may or may not turn nasty on you, kids these days prefer watching an activity from a safe distance. Kids can watch chocolate or plastic eggs being unwrapped on their computer screen. A plastic toy is revealed from within the egg, shown off at every angle. I don’t know who eats the chocolate. There are also kids unwrapping their birthday presents, commentary included. All is at a discrete distance. Unlike birthday parties of old, if your kid becomes bored, they walk away from the computer. If you did that at a real birthday party, you’d get labeled a party pooper.

Unboxing videos, initially designed for demonstrating how to unwrap high-tech gadgets like smartphones from their fancy packaging, seem out of place if you’re trying to give your kid the gift of a real-life experience. It’s akin to bubble wrapping your kid before sending him out on a bicycle with training wheels.

Retail giant Amazon has the solution, although whether young consumers will bite is an unknown. Give your kid a cardboard box to play with. What your kid does with it is ultimately up to them. 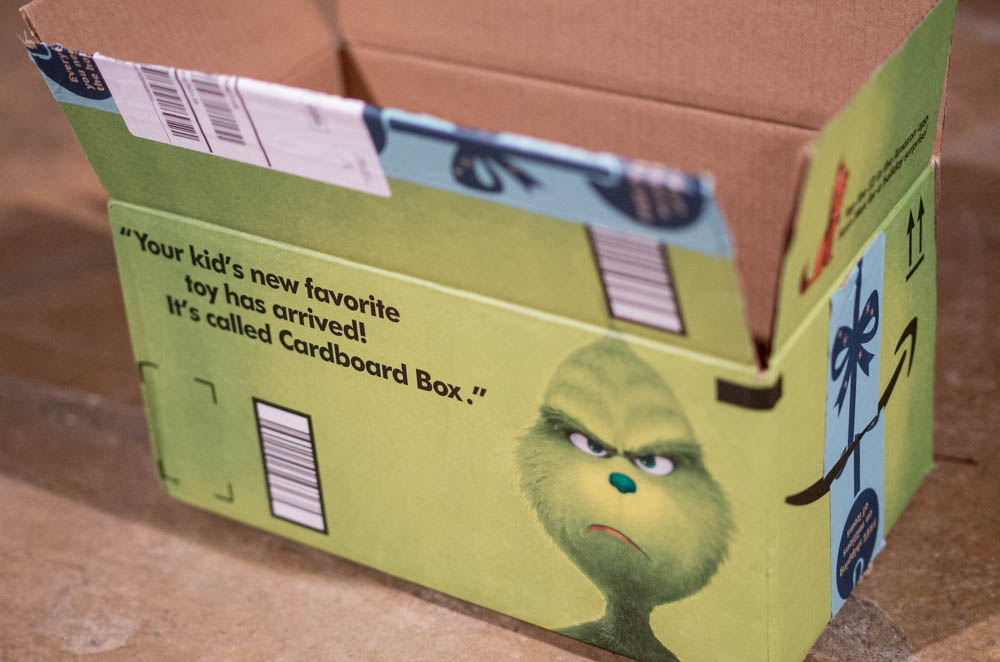 I think Amazon has the right idea. There is nothing less dangerous than an empty box. Or is there?

I’d not seen those toys that turn…uh…angry. While I’m all for encouraging kids to learn to express their feelings appropriately, these toys leave me cold. I’ll continue to buy books for the kids in my life. Well, and Legos. Of course. Experiences, too. Thanks for posting this, Emily!

Yes! Books and Legos are the best! And mittens, of course.