The How To Mother-In-Law Operations Manual

I was recently gifted another kid. It was a great opportunity to add a child to our family without me dealing with being pregnant, which previously (twice) has meant gaining 50 pounds a pop. And no, I haven’t acquired another dog, and I still have the same husband. But thanks to my son, I’ve become a mother-in-law.

As everyone knows, marriage is a battle.

At least, that’s what all the self help books tell us. Relationships between men and women are called “The Battle of The Sexes.” Presumably, if you believe what these books say, when you hook up with someone for life you are gearing for a lifelong war zone.

I think there are two war zones when families combine, and it has nothing to do with either the sexes or sex, which is more of a problem solver. The first zone is raising children from birth forward; by acquiring my third child via marriage, it eliminated not only pregnancy, but Teenage Mouth Syndrome and the WHAT AM I years in one fell swoop.

However, the marriage of my first born did plunge me directly into the depths of Mother-in-Lawhood, a state of alternate reality. I’ve relied on those who have trod the path before me for sage advice in this most critical second war zone.

To a one, my friends told me to kiss my son goodbye if I were to cross paths with my new daughter-in-law, recognizing that she was now his Queen and Commander-in-Chief. It was highly recommended that I learn to follow the mantra: Keep Your Mouth Shut.

I thought this over for a while — okay, maybe a minute or two — before coming to the understanding that this is very difficult. One minute your son is a needy child, phoning for advice and psychotherapy, the next he’s sleeping with another woman and going out to brunch with her. The bed issue was never a problem; it was breakfast that dealt me the final blow.

Because marriage is supposed to be a battle, there needs to be a Manual of Tactical Maneuvers. 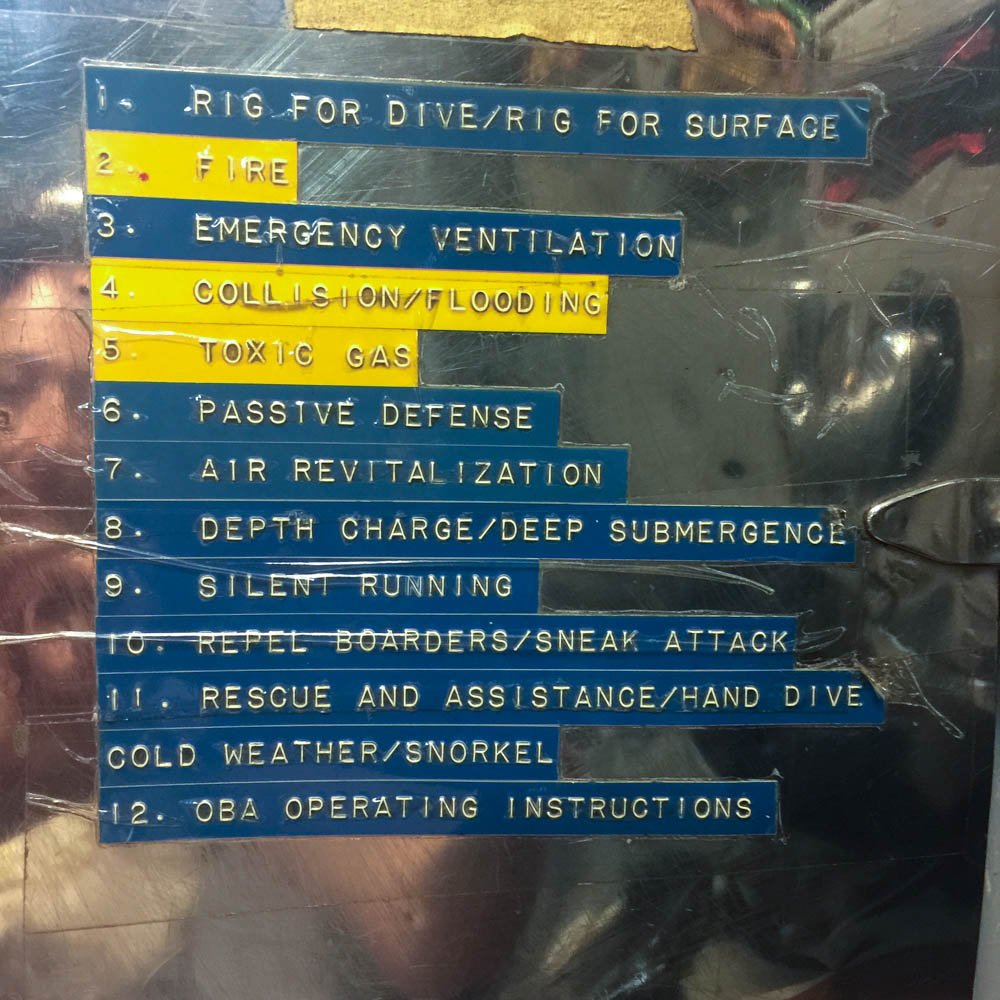 As with any complex battle submarine, being a Mother-in-Law requires an Operations Manual. Or at least a list of potential problems that may arise.

I decided I needed an Operations Manual, of sorts. We recently toured the USS Becuna, a WWII submarine permanently parked dockside at Penn’s Landing in Philadelphia, where I spotted an embossing tape list still tacked on the stainless steel bulkhead of the submarine. The list seemed to provide a great jumping off point.

1. Rig for Dive/Rig for Surface

This is the crucial moment when you realize your son is in love with someone other than you. Your heart plummets, dropping to the ocean bed — or however far down WWII submarines can dive — before slowly regaining elevation. It’s an ethereal experience. You’re deadweight, and then filled with buoyancy, capital letters zoom through your head in ecstasy: OMGOMGOMG! He’s actually gone and caught one!

Your heart’s afire, your brain’s afire, your credit card is melted plastic, because before you know it you’ve promised assistance in whatever way your new child wants to help create the MOST PERFECT WEDDING EVER! From 1700 miles away. Yay.

♠ This route has tolls.

♣ Your destination is in a different time zone. Two, to be exact.

You take efforts to discover who this person is who has stolen your son away forever. Rationalization sets in. He’s a fairly decent person at this stage of his life. Therefore, she must have similar, admirable qualities. You tentatively include her in family group texts, worried about overstepping bounds, leery about seeming too pushy.

♥ You discover a mutual love of dogs and French fruit tarts. 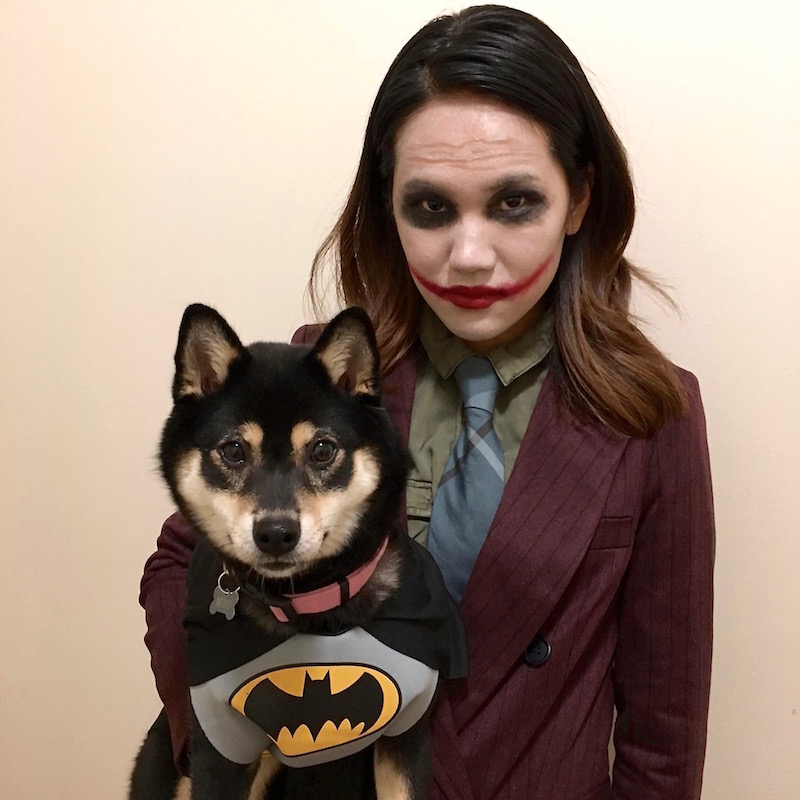 I also discovered my daughter-in-law had a mutual love of Halloween costumes.

As you trade Pinterest pictures, visions of wedding gowns and floral arrangements collide. Will the differences of style sink the submarine before launch? She’s minimalist, you’re a fluffy bouffant of lace and tulle.

♥ You discover a mutual affection for oysters on the half shell and wild flowers. 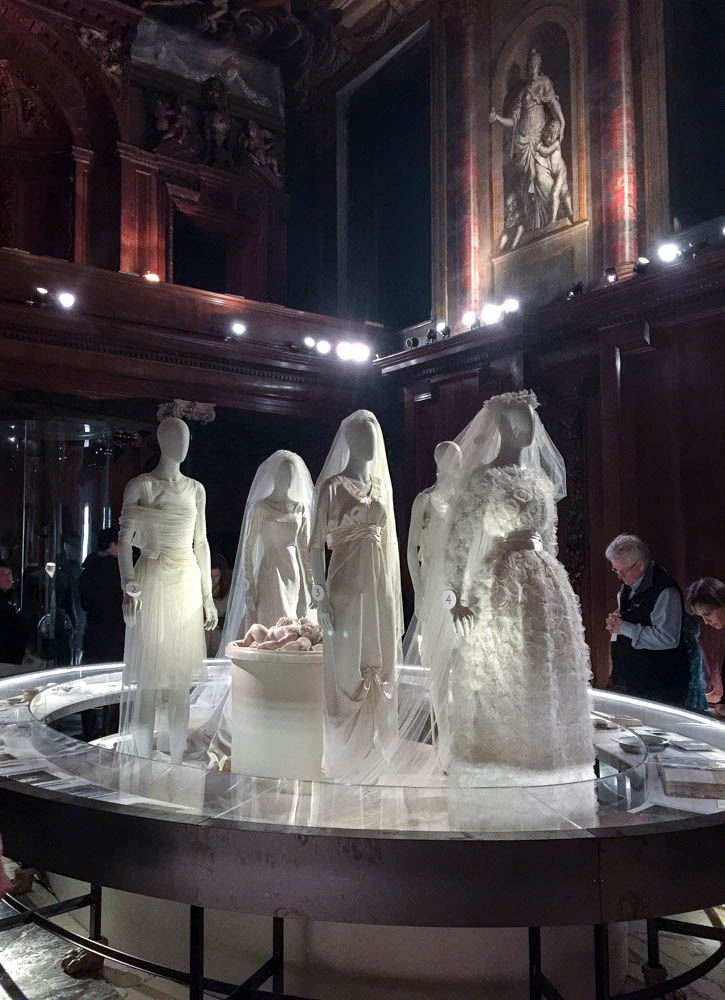 She texts you at 8 o’clock on a winter’s evening, requesting addresses for the names you’ve provided for the wedding list. She wants them NOW. According to the Wedding Planning Manual, the invitations will be late if they are sent yesterday. You stay up until 11 that night and send them off, including detailed instructions for how-to-address-the-inside-envelopes for each invitee. Emily Post is riding shotgun.

♠ You realize on receiving your invitation that she had no intention of using inside envelopes.

♦ It’s a new generation, Mom. The invitations are quite casual. QUITE.

♥ You realize you received an invitation to the wedding.

Months pass, wedding plans are on autopilot, and you drift. It’s time to let the couple be — to a point. Periodic spurts of texts erupt, there are phone calls of distress. The instruction sheet for the caterer has been filled out and forgotten. They are a couple; they have their lives, you have yours.

♥ Your son and daughter-in-law take a week vacation but send you pics of their meals, unasked. As a food photographer, you’re pretty darned thrilled.

♥ You discover a mutual love of Instagram, food shots and cooking.

On an impromptu visit to where they live, as you head out for an after dinner walk to the dog park on the edge of the East River, your daughter-in-law hands you the leash of their dog. 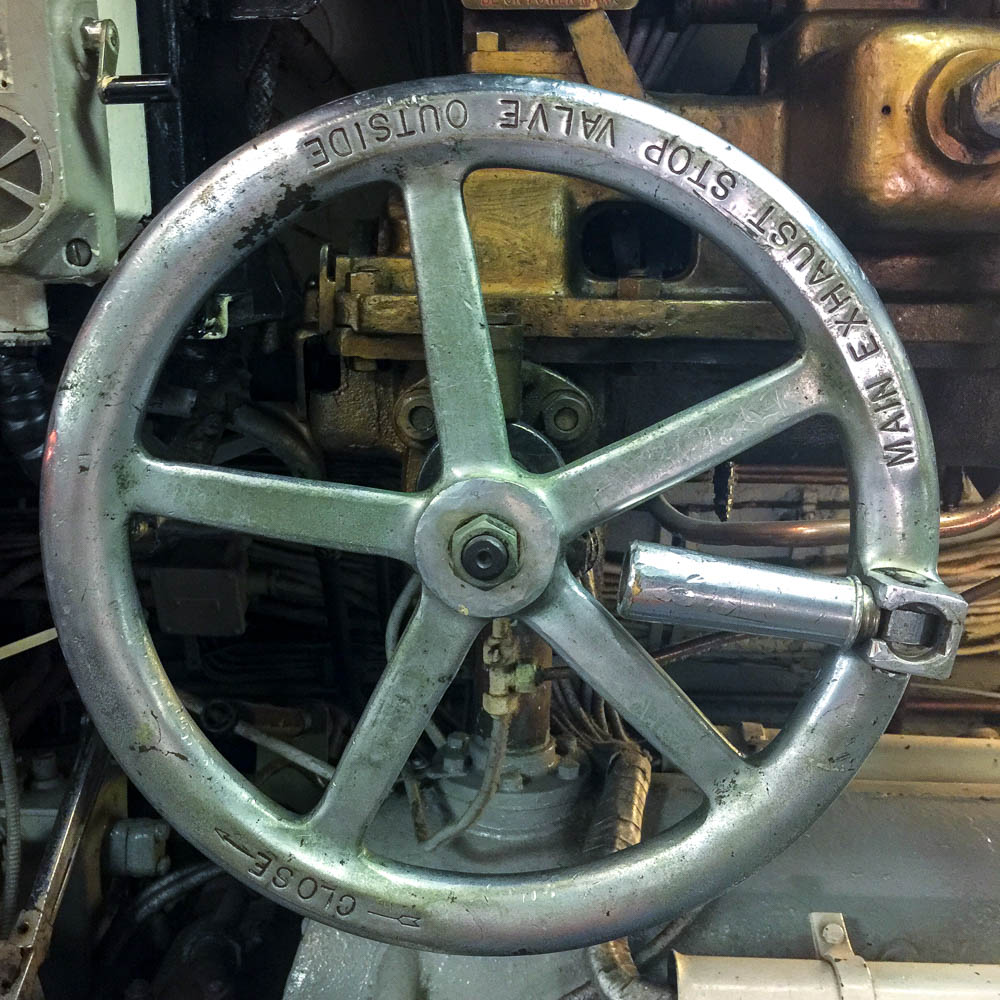 Sometimes it’s a question of who takes control of the boat.

She texts or calls occasionally for advice. You begin to understand you’ve added an Insta-Grownup to the family, but she still listens to you, the adult. Sometimes.

You learn that her favorite nonverbal way to communicate is by texting you GIF’s. You learn how to search out GIF’s on the internet, copy, paste and respond in kind.

♥ You see that your daughter-in-law has a fantastic sense of humor.

♥ You understand why your son fell in love with her like he was hit by a ton of bricks.

A struggle ensues as stragglers RSVP to the wedding invitations, as your daughter-in-law freaks out with seating arrangements for the reception, as the meaning of “Respondez Vous, S’il Vous Plait” is rendered meaningless by Twenty-First Century manners. The Battle of the Families resurfaces. You placate with, “Everyone understands how to respond to an invitation differently,” knowing this is a meaningless platitude, and silently are in complete agreement with her.

You arrive early at the wedding venue to tuck and polish. You commiserate and make light of the fact that she forgot the wedding dress in their New York City apartment and needs to turn around and drive back two hours to retrieve it, ascribing it to nerves. You learn how to create a bridal bouquet. The wild flowers are already wilting from the summer heat but you tuck the bouquet into the wine fridge in the Bed and Breakfast, hoping for the best.

♥ Your daughter-in-law declares the bridal bouquet perfect — exactly what she wanted, in fact. 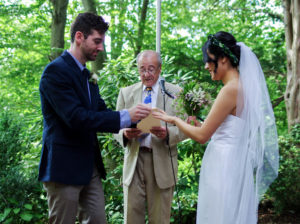 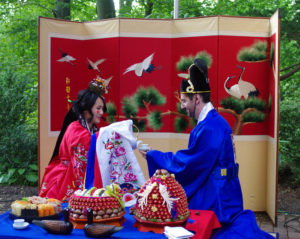 Later in the evening, observing happy wedding guests — the family from both sides who’ve traveled across the globe to celebrate and your son’s friends dating all the way back to grade school and forward — you remember his Bar Mitzvah at age 13. True to tradition, all from the Rabbi down informed him he was now a man.

But when my son married, my new daughter-in-law made him a human being.

She says I’m giving her too much credit. I don’t think so.

Interested in reading Emily’s recent award-winning novel, Drinking the Knock Water: A New Age Pilgrimage? Find it on Amazon and in Indie bookstores.

Loved this one about the wedding, mother in law syndrome, including pics!!!
your blogs are super. short to the point, and fresh,
xo

Lovely! So clever and honest and true. Your journey as a mother-in-law is just beginning and you’re doing great!

Emily, congratulations! Your daughter-in-law is lucky to have you, and I’m sure she knows it. Couldn’t believe the part about forgetting the wedding dress–the bride must have been so upset! It sounds like she–and you–did a great job of pulling it all off, though, and that it all ended beautifully. I wish them every joy together. (I do wish you’d posted a picture of you and Dr. K. with the wedding couple!)

Thanks, Lynne! It did end up wonderfully, our daughter-in-law and the wedding were gorgeous and we love the addition to our family. When I get wedding photos, I’ll email you one.

Made me smile…as a MIL 3 times now…I am finally getting the hang of it….
Occasionally I refer to the manual on when it is safe to dive ..and when I need buoyancy tanks. It’s been 8 years…. A long time “at sea” you’d think… But the ebb and flow of the tides are now quite familiar….I may actually be passing this test!

Thanks for sharing, Emily!
Your creativity is showing 👍🏻

Thanks, Judy. How to operate a submarine and marriage go hand in hand, don’t you think?

I love being a mother in law… I gained two beautiful daughters and love them dearly!!!

Emily, after having just returned from my son’s out of state wedding, I love this! Made me laugh and even sniffle a bit. Yes, being a MIL is new territory. Thank you for your words of wisdom. 🙂

My only advice is to be yourself or you will end up miserable. I tried it the other way and lost myself.

Loved reading this, and a little catch-up on J. Best wishes to them both!

Thanks! I hope all is well with you and M!

Loved this! This hit close to home. My son just recently got engaged and they are planning a spring/summer wedding. I laughed and cried. #allthefeels

Congratulations! You’re the Queen of #allthefeels. You got this!

Great advice. I needed this last week. I’m venturing in with 2 new girls at the same time.

Two at once! That’s a major challenge to your emotions. I hope this helps. Let me know how things are going.

Well Emily…..This has left me crying…been through it twice and in the midst of it now as Peter weds this Sept. Seriously, you’ve stepped inside my heart and are spot on. Bob and Matt’s wife, Shay(daughter in law #1) are laughing at me as your article truly touched me. PERFECT!

All I can say is, “Awwwwwww, shucks.” And save the article for Shay when she has to go through it.

This is a wonderful piece!

Absolutely loved this one!!!