I’d Like a Pink Slime Burger, Please. Hold the Ammonia.

Every once in awhile I break down, and against my better judgment, I order a hamburger.  After all, what in the world is better than a thick chunk of oozy-pink ground beef that can barely contain itself between two hunks of bread.  I know.  A salad is a much healthier choice, obviously.  But, you only go around once.  Live a little.

Which was precisely my frame of mind last Saturday as I sat in the quaintly-decorated Ship Tavern at the acclaimed Brown Palace Hotel in Denver with two of my most fun friends, Nurse Lovee and Iron Girl.  We were thoroughly enjoying a spa day in grand celebration of two facts.  (1) Nurse Lovee, the proud owner of two spanking new titanium knees, can once again walk (unaided!) with a bounce in her step (please give a cheer:  this is only 8 weeks post-op, but granted, she is still a spring chicken); and (2) with said recovery almost complete, Zen Ironing Tuesdays are back in action!

(In case you didn’t know, Zen Ironing is an opportunity for my friends to hang out with me while I, yes, iron, and we talk.  And drink wine and beer, of course.  Which is when things get fun, or serious, depending on the weather.  You can find my articles on Zen Ironing here: https://www.feedingthefamished.com/?cat=15&submit=View)

So, post-spa, after being buffed and polished, I sat in the restaurant, eyeing the menu, my gaze bouncing back and forth between a lower calorie artery-clogger, a Cobb Salad, and that burger.  After wrestling with my conscience, I went for the beef.  And not just any old McDonald’s greasy fry up.  I smilingly asked the attentive waiter to bring me the American Kobe Beef burger, lettuce, tomatoes, and, yup, wait for it, asked him to slap a fried egg on top.  (Lest you gag, and ask yourself at this point, “I thought Emily has good taste, what the. . . ?”,  hang on to that thought.)  This egg gig wasn’t my idea; it sat there blatantly declaring its presence on the menu.  But I figured, go for the gold.  And then I added an order of truffled french fries to complete my lunch. Pure heaven. 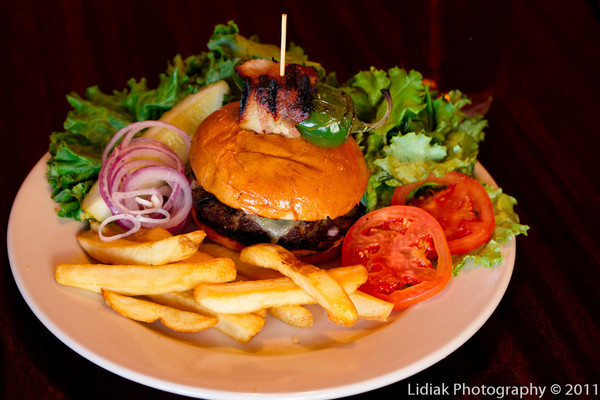 Sometimes, you just gotta have a burger. . .

Lest you think I dined in sin alone, think again. We three ordered the same item.  Even Ms. Made-of-Iron who’d insisted on running a miserly 8 miles that morning before we headed out the door. That’s a light day for her.

After quite some time waiting for the kitchen to travel to Japan and find a Kobe cow, acquire an American passport for him, and then once he’d said the Pledge of Allegiance, properly dismember him to concoct our lunch, all of a sudden, there it was, grandly presented on an oversized plate.  The fried egg perched precariously, happy and sunny yellow, on what had to be two-and-a-half inches of glorious Kobe-Godzilla burger.  I’m not lying.

I gently laid the celadon green lettuce on the egg, then the tomato slice, admiring its deep red color in spite of the fact that tomato season is months off, and then the top bun.  With a smile ’round the table, I lifted the sandwich, just as the weight of the vegetables, pressing with a little “pop”, released the yolk, allowing it to ooze down the sides.  I bit, and sighed, content.  Eau de truffle, with its woodsy sensuality, wafted across the table, perfuming the fries and my fingers.

That’s when Iron Girl said it.

She’d carefully applied the same toppers to her sandwich (sans egg, that apparently went too far) and, delicately slicing hers in half, queried us:  “Have either of you ever watched that Jamie Oliver YouTube video about Pink Slime? Ugh, totally gross.”  Then she bit into her lunch.  So, no, not the best of timing.

Evidently, Pink Slime is the cutesy terminology for mechanically separated meat (MSM, if you’re talking pork, MSP, if it clucks before you whack its head off), a bizarre process dreamed up by our food industry to make sure every little bit-o-meat is gnawed clean off the bones, tendons and whatnot included gratis.  This is billed as a “recovery process”.  Now, when I think of the term “recovery”, it brings to mind “feeling better” or being “on the mend.”  This is not what we’re talking about here.  This brand of “recovery”, if I read my Merriam-Webster’s accurately, is more along the lines of what you do when you’ve got a chunk of scrap metal and you’re just certain that there is gold (or aluminum, or some such by-product) which can be, through a treatment process, separated from the scrap to create something useful once more for mankind.

Ah yes, and yet, the devil is in the details.  You see, while it does sound like a brilliant plan, the end result, pink slime, does not resemble a New York strip by any stretch of the imagination.  The entire concept gives me a creepy, crawly feeling, and yet, when a few days later Iron Girl emailed Nurse Lovee and I the video link, I’ll admit it.  After skirting the option to delete or not to delete for several days, I watched it.  I’ve decided to share the video link with all y’all, in case you’re inclined.

You don’t have to watch it, but I double-dog-dare you to try not to.  It’s along the lines of going to a scary movie and you swear that you’re going to keep your hand over your eyes as soon as that eerie music starts up, but, you Just.Know.That.You.Can’t.  It’s impossible not to watch.  I’m certain that there’s some psychological attribute for this, attesting to the gullibility of humans and the fact that we don’t want to appear as sissies in front of our friends.  And maybe, there’s that hair’s breadth of possibility lurking in the back of our minds, goading us, pushing us to look.  Because, maybe the axe murderer won’t get to have his way with the silkily-sinewed teenaged babysitter in this movie.  Please?

For as long as I can remember, food has been fun to play with.  I’ll never forget the nights when my Mom would clean out the refrigerator; my Dad turned the entire operation into a carnival as we watched her pry open Tupperware lids, cautiously peering inside to see if the teaspoon-full of spaghetti sauce from two weeks ago had developed mold, or was it still edible?  Dad’s running commentary kept us in stitches, and I generally lost it halfway through the performance, having to make a run for the bathroom, laughing so hard I was afraid I’d wet my pants.  (I didn’t always make it. . .)

In high school and college, evaluating what we ate took a more serious turn, as I was exposed to Upton Sinclair’s 1906 muckraking novel, “The Jungle”, and more recently, “Fast Food Nation” by Eric Schlosser.  While the addition of ammonium hydroxide into quasi-regurgitated meats supposedly acts as an antibacterial agent, and the pink sponge-like texture of meat by-products can be easily sculpted into any sort of foods along the path of whimsy, I don’t see eating a hot dog at the baseball game in my future.  I don’t care if the USDA says they’re safe to eat.  It is true that beef is no longer pulverized and processed for humans; somebody thought that the American populace was wacky enough without injecting Bovine Spongiform Encephalopathy-laced goodies into the human smorgasbord.  So, we can be at ease there.

And yet, I continue to eat hamburgers.  We ingest unthinkable foods all the time, in the name of tradition.  What would Passover be without a helping of gefilte fish, heavy on the horseradish to cover the horrible taste.  Norwegians swear by Lutefisk, which translated literally means “lye fish”, because this northern delicacy is concocted by soaking cod in lye.  Not kidding.  My Scandinavian friend who prefers to remain nameless describes it along the lines of a hard-as-rock cured white fish that will keep until the next Millenium, leaning up against your igloo.  In case you’re interested in creating Lutefisk for next Christmas Eve, she says grab a codfish, boil it ’til it gives up it’s poison and turns into gelatinous goo and serve it up with boiled potatoes and a white sauce.  It’s a colorful holiday meal.  Not.  She advises me that in her family, the suitors got a special dish of bœuf bourguignon. The rest of them were not allowed to have any of it, only the lutefisk, which policy ensured the continuation of the family line.

I always thought lye was an essential ingredient for making soap.  Somehow, if you put lye, a derivative of wood ash, into a test tube with plain old lard, and wave your magic wand, voilá!  Out pops a scented bath product.  Which is worrisome:  how hard do you have to scrub to get clean?  This is one of those things we shouldn’t dwell on, too much.

I suppose there are some benefits to ammonia-washed food.  It sounds like a great way to clear up your allergies and hayfever. One huge sniff, and you’re good.  It would save a lot of money; you wouldn’t have to buy Claritin, plus you get to eat at the same time.

I don’t know.  The Paleo diet is looking appetizing right about now.

Me and My iPhone. A Battle of Wits

Is What You Taste All In The Perception?

Bulgur with Zucchini and Poached Egg

It is a funny scene of you all getting the beauty treatment, being all healthy and Ms. Iron lady running her eight and then eating glorious hamburgers and then topped with a egg? OK Or another glorious hamburger would be Gunther Toody's or Red Robin. Not so elegant but also super delicious and not heart healthy!