Is It a Riddle? Or Merely Bait and Switch Tactics

I am puzzled and mystified.  This has been an ongoing situation, evolving gradually, increasing in significance, with each new development.  It all started back in May, or thereabouts, during the outbreak of equine herpesvirus, which is highly contagious to horses.  I don’t own a horse, although I find them incredibly cute, and at times, wish I did own at least one.  For every little girl who has read Misty of Chincoteague, you know the emotions of which I speak.

We were oh-so-very close to owning a horse, one night at a fundraiser, when a beautiful two-year-old brown horse with a black mane (my personal favorite) ambled up and nibbled delicately on the orchid lei encircling my neck.  It was one of those sort of events where they invite the horses to dinner. I think they make more money that way.

“Please?” I asked Dr. K.  “Let’s take Grace home tonight.”  In case you’re confused about my religious leanings, just know that Grace was the name of the horse. 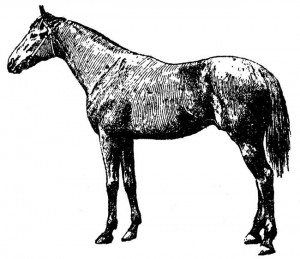 Here’s a riddle:  When is a horse, not really a horse?

We debated, discussed, paused and hesitated, throughout the evening.  Should or shouldn’t we allow a very large four-legged animal into our home?

Because, of course, Grace would be “in our home,” at least technically.  She would have her own sleeping quarters, appropriate for a horse (a barn,) and while not exactly be eating breakfast with us, her breakfast would be part of our responsibilities.  And, she’d have to have companions, because what creature doesn’t need warmth and love from their fellows?

So, the next week, we bought a boat.  Not just any old boat would do, because this boat would have to replace Grace.  A living, breathing, very warm-blooded mammal who enjoyed nuzzling up against your neck to check out whether you’d brought her an exquisite orchid from Hawaii.  Or at least a carrot from the vegetable drawer.

The boat was quite fast, and to my thinking, terribly boring.  We live in landlocked Colorado. There are very few places where you can drag said boat for several hours of weekend fun.  Which is why, other than a couple of random excursions to large lakes, the Malibu Wakesetter only saw the waters of either Boyd or Carter Lake.  They’re small, cold and not terribly exciting.  Once you spend a couple hours gyrating in circles, attempting to drown children in lake water via wakeboard or inflatable contraption, the novelty is over. Particularly if you’re someone who enjoys activity but doesn’t like getting wet. 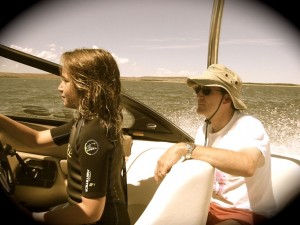 Isabelle drives the boat, in the wake-free zone, of course.

The boat made a lot of sense, financially, when weighed against the potential, and often unknown costs, of equine ownership. Not to mention the hands-off quotient; you can very easily leave a boat and go off to California on vacation.  Not so much a horse.  So, we made the choice, and an inanimate boat resided for a number of years in our corral.

There are times when you can’t opt out of the real thing.

For example, during this horse herpes virus back last spring, it was deemed too dangerous to allow the animals to congregate together, for fear of infection.  Instead, contestants in Ogden, Utah, competing for the Posse Junior Queen crown, were required to ride stick horses to show off their cowgirl prowess.   Can you imagine trotting around an arena, stick pony between your legs, in order to demonstrate the routine which the pony was supposed to perform?  One contestant noted that it’s different, riding a stick pony, and a bit more tiring, since normally, it’s the horse that does the work.  Um, yeah?  So why would the officials do such a thing to these poor girls?  It reminds me of the scene in the movie, Amadeus, where the Herr Direktor insists that Mozart remove the music from a ballet in the middle of The Marriage of Figaro, because his majesty, Emperor Joseph II, decreed that there couldn’t be ballet in his operas.  Of course, the Emperor himself appears at rehearsal, observes the actors hopping around without music, declares it, “nonsense,” and the music goes back in, to Mozart’s relief.

This testing of the ludicrous, which makes me wrinkle up my forehead, asking “why?”, seems limitless.  Why would there be such things as “Loud Libraries?”  They do exist.  In attempts to attract teens to venues where previously, shushing prevailed, respectable libraries across the country have filled large rooms with PlayStations, Wii game consoles, laptops and electric keyboards, allowing kids to chow down on snacks while lounging on couches, trolling Facebook and making movies.  It sounds like the basement in my house, rather than a library.  And while this new format may make libraries less stuffy, more coffee-house cheery, chatty sorts of places, one librarian laments that it’s too loud, that it’s impossible to think, or reflect, in such an environment.  Can you still call it a library, if you can’t silently consider how the world works while in it?

Advances in technology have always changed how we humans approach, and interact, with our surroundings.  The current debate over reading a book, as a book, or on a Kindle, is no different than the debate that raged around 1440 when Gutenberg introduced the printing press, making books and learning available to more than just nobility and heads of state.  Print brought with it derision and criticism; it was condemned for its crass content and dumbing down of culture.  Reciting from memory was better, warned the educated minority.  “Anyone can print their thoughts!” the elite warned, that a new wave of people participating in reading would create “a new dark age of mediocrity and narcissism.”  Sound familiar? Except that today the worry is no one will read books anymore; that a bound volume of the written word will become antiquated, because you can’t click on words to jump to a built-in dictionary.  If you’re reading on a computer device, are you nonetheless reading a “book?”  I think so, and in this case, variety adds spice to our lives, through interaction with a beloved media form.  It makes me wonder whether the kids in those loud libraries may actually be learning something, just in a different sort of way.

But then, there is Santa Claus.  Did you know that any kid with computer access can Google “Is Santa real?” and stumble upon an enormous variety of interesting hypotheses about the jolly old man’s existence, templates for letters to Santa (and response options for Mom and Dad) and Santa boot print kits? Opportunities to video chat, text or twitter Santa abound, and his every move is charted by NORAD, lest there might be the slight worry that he won’t show up.  In the event he becomes lost, he can always rely on assistance from a Global Positioning System to help make his rounds.  Do these methods of bringing Santa down to our level of ordinary humanness decrease his mysticism?  It makes Santa look a bit more like any old guy, except that we all know guys don’t ask for directions, so possibly, the myth can stay intact.  My kids still believe in the Tooth Fairy, even at ages 20 and 17.  At least I hope they do; my hand-drawn letters which I left under their pillows, dusted with tooth fairy glitter, left them starry-eyed, and they’ve never questioned it since.  Why must that myth be shattered? Why must the willing suspension of disbelief digress into insistence on knowing the concrete answer to all our riddles? 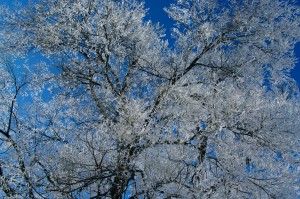 Frost on trees, such as this, happens only occasionally. While transient, the contrasting blue and icy white leaves a permanent memory, as only the real thing can.

Conversely, why must we always have a replacement for what is real?  The other morning, I drove out on icy streets, tires chattering against chunks of snow, struggling to gain traction.  I had a hard time keeping my attention focused on what the 3800 pounds of machinery I grasped hold of was doing, so beautiful were the nature frosted tree branches, starkly outlined, glittering, against a deep blue sky.

I completed my errands quickly, and hurried home to snap pictures, anxious lest the ice melt from the trees.  I know I can buy “iced” branches to save the memory of that beauty, but it wouldn’t be the same.  The fake ones would last until I change my decorating scheme to springtime blossoms, but doesn’t something which you can see everyday become old?  It’s the novelty of that crisp blue sky set off against iced limbs, the knowledge that seeing this today, will be only for a short while. Just as knowing that there is no substituting a boat for a horse.

So, Who Is It I’m Hiding From, Exactly?

Chicken with Endive and Mushrooms

The Face of Homelessness Is Not What You...

Lovely article Emily,
I also love a hoar frost and suggest you drive near the Platte river when you notice ice particles hanging onto the limbs. Due to the moisture near the river the sight is magical! You will love it.