It Starts With a Fish

When I was about thirteen, my Great-Aunt came to visit us from Brazil, bearing gifts and wreathed in an aura of glamour. Aged sixty-five, her skin tight bikini fit flawlessly, she sported red-painted toenails, and consumed cherries by the handful. All the grandma-aged women I knew at the swimming pool were swathed in layers of tailored spandex designed to discreetly cover bulges and unsightly bumps, and my mother tended toward pale pink polishes, if she wore any at all. My sisters and I had been instructed to count out our cherries into a bowl, with the understanding the allotment was never to exceed ten. Cherries were precious fruits.

Great-Aunt Millie was a fascinating whirlwind of assertive womanhood, and her gift to me was a silver fish pendant with hinged scales that could be wiggled to assimilate swimming.

“At your age, you are entitled to wear a fish,” Millie told me. “It is a symbol of fertility in Brazil, and means you are now a woman.”

I wore the pendant faithfully for a year or so, until, tired of explaining its symbolism to peers, and at times enduring ribald jokes because of its undercurrent of meaning, I put it away in my jewelry box, preferring to wear a peace sign necklace, an adornment that better captured the early ’70’s teen mindset. But I’ve often thought about that silver fish and what it represented.

When my daughter moved into her first apartment at age twenty, she promptly acquired a red and orange betta fish. My first inclination had been to advise that it was more than enough responsibility to take care of a three-room apartment, but I bit back my proffered kernel of wisdom. Burton was a fish. How hard is it to take care of one little fish in a garden-variety fish bowl?

Burton seemed inordinately happy in spite of his limited surroundings. Whenever I visited, he swam to the front of his bowl, waggling fins and blowing bubbles. We had brief conversations about life-in-the-round, and I quizzed him about the view of the street below from his perch on my daughter’s desk. Fertility and all of its interconnected meanings never entered the conversation, and when my daughter asked me to stop by every day to feed him while she was away on Spring Break, all I could think was, “Please, don’t let the fish die on my watch!”

Burton continued to eat his pellets, contentedly exploring his round confines, and developed gracefully flowing fins and tail. I enjoyed our brief visits. He was as close to a grandchild as I wanted for a long time, and that was fine.

Since my daughter was handling the responsibility of fish ownership so well, she decided it was time to acquire a cat. 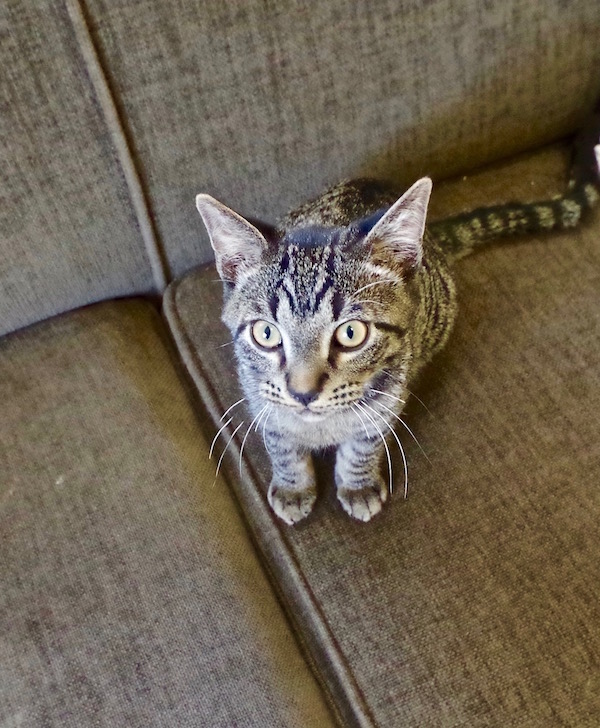 What she really wanted was a dog, but as a college student, it’s difficult to manage the boundless energy of a corgi who must go on walks and have a yard to relieve himself. She realized a cat is the lesser furry evil, who doesn’t seem to mind if its owner isn’t home for dinner or stays out late. I told myself I would like this cat, even though I am not a cat person. But I also wanted to make sure she helped Burton remain happy and not floating sideways.

Adding another living creature to your life creates an additional layer of responsibility, another dollop of detail to melt into life’s lasagne.

Excalibur leapt into all our hearts immediately — and how could he not? A bundle of black-and-gray striped energy, who doesn’t love a kitten, particularly one with such self-assurance. He looked intensely at me, and I scrutinized him back, evaluating the inquisitive green eyes that searched my face for meaning and friendship. Excalibur also dominated my daughter’s apartment, three rooms that she had carefully made cat safe. He leapt from chair to table to couch to floor, raced madly into the kitchen, did a swing through the bedroom, and then he was back again, commanding the living room, managing a gymnastic leap from my lap where I sat on the couch up onto my daughter’s desk where Burton swam. His agility was amazing. 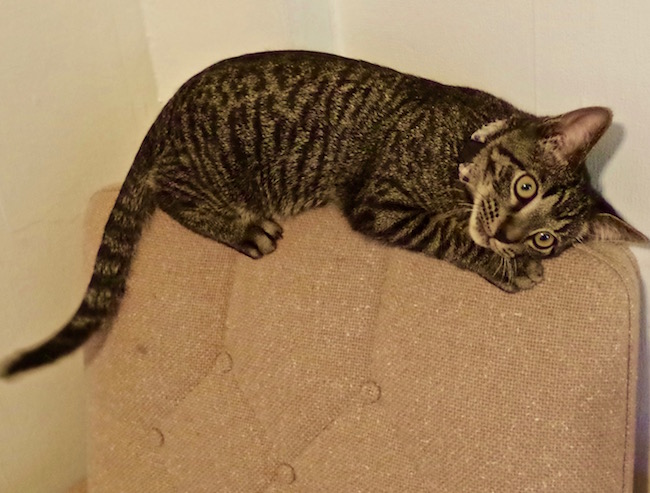 I believe inside that furry, gray head, the wheels are always turning, making plans for his next move.

The fish’s movements had changed. Where once graceful and lithe, Burton was now agitated and confused, often hiding in the bowl’s plastic flora. My daughter had placed a book over the top of his bowl, leaving enough room for air, and not much room for an inquisitive gray paw.

She called me after a week or so of fish-cat ownership to let me know Burton the Betta fish was no longer with us. Burton, wrapped in a Kleenex, was given a quiet funeral in the back yard of her apartment building. 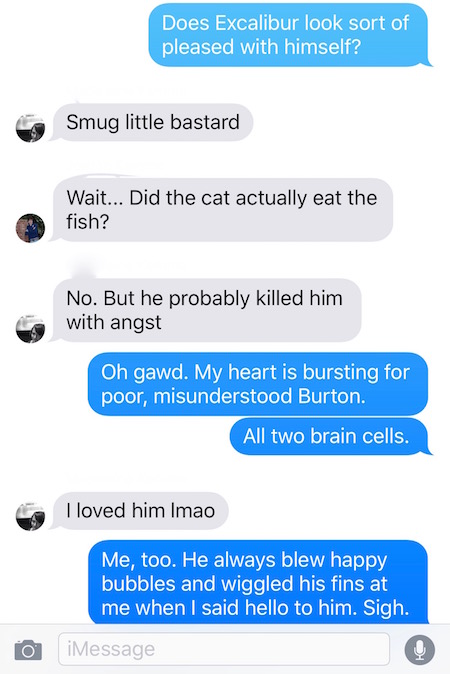 I know Burton was only a fish, easily replaceable, expectedly temporary.

But in the months he spent with us, he had created a space for himself. From his limited confines, he managed to insert himself into conversations with my daughter, enabling her to broaden her outlook of the world outside her door. With the responsibility of pet ownership, she had taken a step toward adulthood.

Many cultures revere the symbolism of the fish. It represents knowledge or wisdom, creation, happiness, and freedom, to name a few.

I believe a fish can also educate humans to respect life of any sort. With respect we learn empathy. That recognition starts with a cold and slimy organism in a bowl that is only capable of conversing with the world around it by waggling its fins in recognition of another organism in its sight. It moves to the furry, leaping kitten that most likely frightened Burton to death with those intense, green eyes and spiky whiskers. And from there, the world is open to us.

I’ve forgiven the cat. Maybe it was Burton’s time to go. In the meantime, whenever I enter my daughter’s apartment, Excalibur weaves figure eights around my feet in ecstatic greeting. He rolls onto his back, wrapping his paws around my shoes, and purrs. This is only the beginning of my visit; Excalibur’s welcome performance in the apartment vestibule takes several minutes. We are getting to know and love one another, this little creature and I; he has been well-trained in what love is. 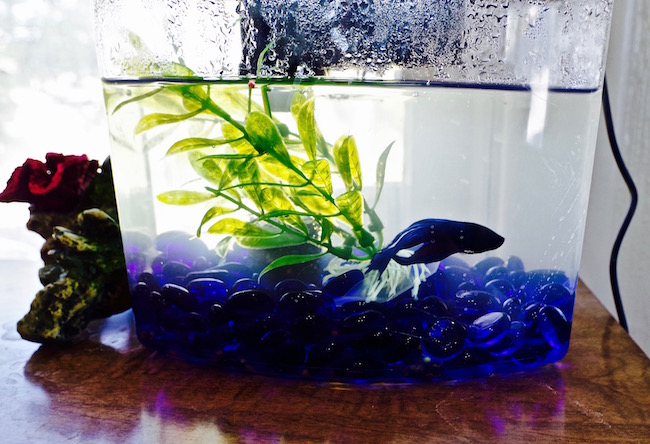 Merlin the Blue Betta Fish placidly swims in his world, knowing no gray paw can reach him. At least, so we all hope.

And there is a new fish on the desk, in a more elaborate tank with filter that bubbles from its sealed cat-proof lid. His name is Merlin, and he is sapphire blue. When Excalibur allows it, I walk into the living room to greet the new fish, and am welcomed with bubbles and a waggling of fins.

The How To Mother-In-Law Operations Manual

Immigrant Life: Taking Off the Cone of Shame

The Thanksgiving That Time Forgot

Aunt Millie was a person to be admired as a wonder of a person who had experienced life to the fullest. She was the middle child of my Grandparents, born in Germany, married and moved to French Indo China (Vietnam) where her husband died of a ruptured appendix. Returned to Germany at the time of Hitler’s rise, married in Belgium, and moved to Brazil. There she taught German, English, and French at the University, swam early mornings daily at Copacabana beach, had 2 children (my cousins) visited the U.S. often, as one son was a pilot for Brazilian Airlines. She always came with empty suitcases to my Mother to “borrow clothes”, and drove my Father nuts with her bikinis as she swam in their pool at their apartment house in Denver. She visited Greeley twice and often walked 3 miles each way to downtown for breakfast. She passed away in a ripe old age of somewhere around 90, and always lived a full life and ate cherries with reckless abandonment till the end.

Thank you! I’m glad you enjoyed it.