I have a perennial attraction for strays and the forlorn, the lost, the lonely. When Harrison came home from college last summer, having just graduated, and informed us that our house was too big and we needed to downsize, as is typical, we listened, and put the house on the market. We would find another home to fix up! If you consider Kemme Family Past House History, you begin to see that we only move for our dogs and kids.

We’ve moved many times over the years. Every move carries its stresses, especially for pets.

Actually, that’s not completely grounded in fact. Out of eleven moves, easily half of them were related to attending school in one part of the state of Colorado or the other. Those moves were the easy ones, of a sort where we would call Dr. K’s brother-in-law Jerry, a genial guy who loves to pick up large couches and heavy boxes. We’d call him a week or so before the move, and let him know we were transitioning.

“Again?” Jerry always asked, somewhat perplexed. Moving isn’t a concept he understands; he and my sister-in-law have lived in the same home coming up on 28 years. They found that perfect neighborhood: lushly green and secluded, its winding streets lull passersby into peaceful somnolence, tightly interweaving peoples of all ages so that they never wish to leave. We nod at Jerry, feeling a bit sheepish, afraid to admit that wanderlust is in our blood. Then he’d sigh, and stacking three boxes one on top of the other, begin the lugfest.

Those sorts of moves were quick, from one apartment to the next. We’d begin early in the morning, and by nightfall, what little furniture we owned was in place, kitchen unpacked, and freshly painted apartment-white walls adorned with poster prints. Jerry, Dr. K, and I would kick back, order pizza, and marvel about how easy that had been.

Then we began buying houses. Houses are different from apartments, the biggest difference being that you are allowed to make nail holes in the walls and nobody cares, since now the walls belong to you. Suddenly, we realized there were bigger, more expansive possibilities for destruction. The lure of improving a home became an attraction we could not shake. Starting small, replacing kitchen appliances and grimy linoleum expanded like a math compass. Making a nail hole wasn’t nearly as much fun as tearing down an entire wall, was it? While we’re at it, let’s dig up the back yard, replace the roof, and realign electrical wiring. Paint and carpet? Yeah, we’ll get to those, but first we need to move the kitchen sink from Point A to Point B. Ohhh, the smell of drywall dust in the air, lung-clogging, eye-watering.

When I tell friends that we like to remodel, that there is something special about taking the old and revitalizing it, in finding its inner beauty, they look at me like I’m from Mars.

Our latest home purchase has all of that and more. It’s such a complete overhaul that, unlike in the four previous houses, it will be impossible to live in during the process. And while some people opt for a small condo rental or apartment when engaging in massive home improvement projects, we could find no place to rent in town, no landlord who would willingly (or without paying exorbitant sums of cash) allow us to bring in our four-footed children, Flopsy and Mopsy. 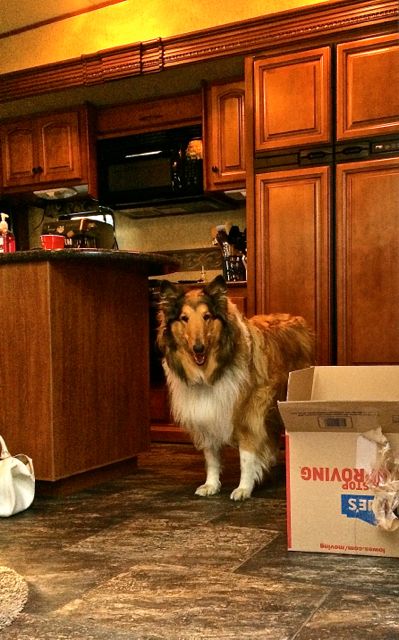 Flopsy’s once-and-only attempt at RV living. She said, “Thanks, but no.”

Over steaks and martinis, we reviewed the dilemma with our friend and contractor, Bud, who suggested that, rather than living in the basement while he created hell-on-earth above our heads, we should put expansion quarters in the driveway. We could still live in the bowels of the house, and use its plumbing for when nature called, but the future would look brighter without clouds of drywall dust tearing up our eyes. Bud recommended we buy a Fifth Wheel to preserve our sanity.

My response was, “What’s a Fifth Wheel?” I was getting wild-eyed with worry. Our house was finally under contract, but we’d given little thought to the next step, all that living stuff.

There is an emotional effect on pets when you move.

The problem is, the furry friends we decided to live in a trailer for are scared to death of it. “Those high metal steps . . . the way it rattles and shakes when we bound from one end to the other — Mommmm,” their worried brown eyes tell me. Even worse, as we reconstruct the drainage system, we have no yard, at least temporarily. And the collies, they do not like it, not one bit. Mopsy leaves me protest art deposits all over the soon-to-be-torn-out carpet, to let me know what she thinks of the changes.

We do not like the Backhoe, Bobcat and Monster Truck.

Back, back we’ll go to our lush green grass.

Remodeling, Mom, is a pain in the ass.

So take them away, away far from here.

Or away we’ll run, back to the yard we held dear.

Dr. K and I, we pet them, cajole and calm them, and still, our furry children are nervous. 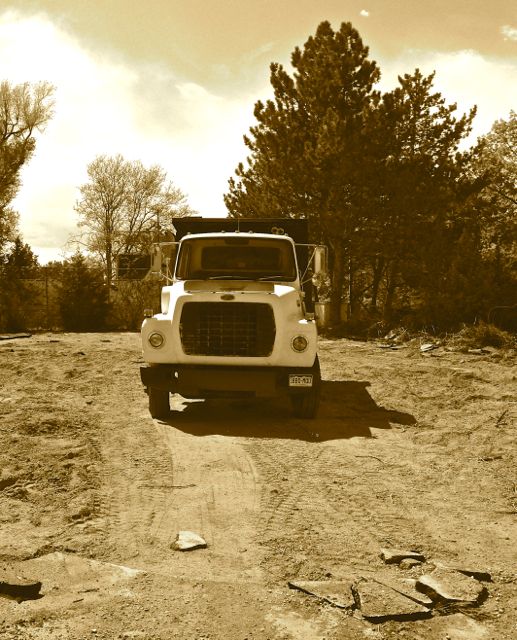 Moving is a frightening experience for animals. They took one look at the Monster Truck bearing down on them in the yard and said, ” No thanks. I think I’ll go looking for grass now.”

Moving to a new house is an adventure, but it’s hard to explain to an animal. I wracked my brain, thinking of what to do that might start them on the path towards acceptance of their new surroundings. I dug through the leftovers in the refrigerator sitting in the garage, a relic from the house’s kitchen we had already torn out.

When I found a container of chicken and rice soup, I knew I’d solved the problem. Feed the dogs chicken soup! If it’s good for humans in distress, why not animals?

As I kept shuffling through the boxes, stacked high above my head in the garage, I discovered the martini shaker. I also learned that Mabel’s refrigerator makes ice! Who woulda thought? An ice maker in a Fifth Wheel?

This is good news. I thought you would like to know about it. Come visit. The bar is open. 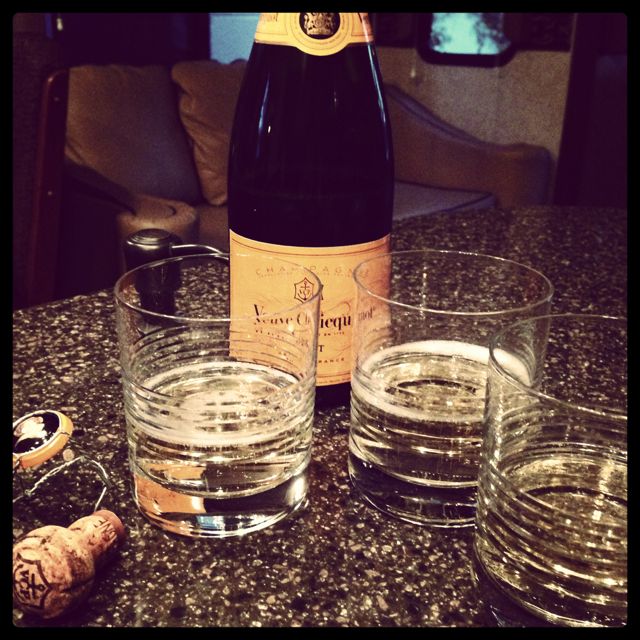 Who says you can’t toast to the sale of a house with Veuve while living in a Fifth?

Shrimp with Tarragon and Cheese Tortellini

I would, seriously, be institutionalized in your situation. On major tranquilizers. By IV. A year ago we had all 24 doors in our house–that includes closets and door frames–replaced, plus one two-story stained wood wall stripped, sanded, primed and painted. The dog handled it far better than I. If I recall correctly, she insisted I drink a lot of tea laced with bourbon to prevent permanent drain bramage from paint fumes. And she was right; it helped.

After Doug finally got my attention this morning to do a walk-around of the “yard” to figure out where he’ll put the new sprinkler drip system, I was ready to be committed to an asylum. But then I regained my sanity by using the fun little vacuum hose to vacuum Mabel from end to end. It took all of five minutes. But I’ll take up your dog’s suggestion of bourbon-laced tea for later this afternoon. IF I can find the bourbon. . .

Oh my…you left that beautiful home!?!? And now, a remodel…where?? New adventures are exciting and exhausting…all at once! 🙂

We’re so very exhausted, but it’s fun. In a really sick sort of way.

Adventures are always a bit of “sick fun!!”
I am happy for you both!!

Where? I’m such a curious Realtor.

Still in Greality. I’ll message you with the address if you’d like to visit our fixer-upper. . .