Meet Fido – The Nesting Varmint in My Chevy Engine

If you buy a truck, it’s supposed to run, rain or shine.

My Dad emailed the family the other day, sounding a bit miffed. His Chevy Avalanche was acting up — or to be specific — driving it was similar to being astride a bucking, snorting Bronco. Even though we live in the Wild Wild West (Colorado) where hitching posts take the place of parking spots (the opinion of disgruntled would-be parkers in the downtown area where I live), and where it snows every other day (according to myth and legend), and even though Colorado boasts a slogan of having 300 days of sunshine (a half truth), it’s nice to have a truck that works, rain or shine. That’s why people buy trucks.

There was a mess of greenery spread around the truck, but Mom figured it had something to do with a recent weekend in the mountains. Dad tried a new brand of gas, he added air to the tires — but no go. The truck’s shuddering got worse with every sunshiny day that passed. He knew it was going to snow, sooner or later. So, he took it in (always a last resort, because the mechanic will always find something else that is wrong with your ride, something you didn’t even suspect) — and — they opened the hood, to find a comfy, green nest in the intake manifold.

You don’t need to worry about what an intake manifold is (unless you want to) because you don’t need to know what it does (feeds air into your truck engine so the combustion engine can explode — an event that sounds worrisome to me but isn’t). You only need to know that an intake manifold is. It exists as a nice, warm chamber beneath the hood of every car that is operational, and it’s the perfect home for small, furry varmints to nest. 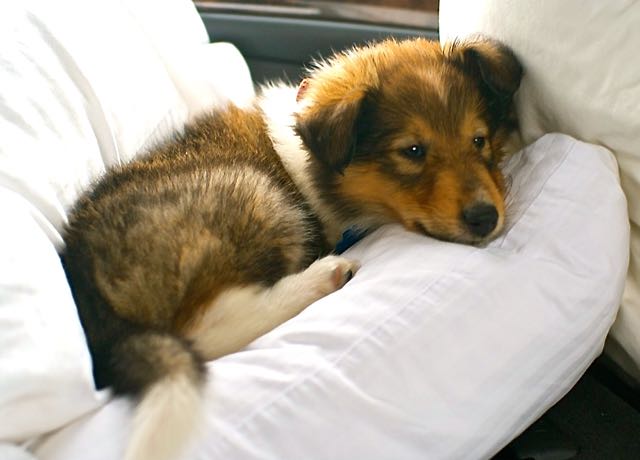 Every creature appreciates a comfy nest. But nests take all sorts of shapes and sizes.

Once the truck mechanic detected the existence of a varmint nest, it became the job of the entire neighborhood to determine the sort of varmint it might be.

Theories abounded: the critter was a Mole (obviously, since it must like dark spaces in which to burrow), or possibly a Packrat who had hitched a ride from the Mountains down to the Plains so he could visit his sister and deliver his collection of wood carvings to his nieces and nephews. Delving further into the manifold possibilities of furry Monsters that could scale the summit of the hood of a large truck (it had now evolved from harmless mouse into a Monster with really BIG teeth), the mechanic ruled the day with the decision that the varmint was a rabbit, one who had chewed up some very important wires (the kind that make a truck run smoothly). Repairs went well (totaling $275), leaving my Dad with a truck in the Recovery Room, and the intention to send the bill to the Rabbits.

How to prevent the varmint from returning to the nest?

The problem with all of this is: what makes you think that the Rabbits, once having discovered their luxurious new vacation home, wouldn’t plan on returning for Christmas holidays? Because of course they would! It’s warm, it’s protected from the elements, and given the unlikelihood that my Dad could identify which Rabbit was the squatter, the condo was free.

The whole family weighed in with suggestions on how to prevent a return. My sister thought strategic placement of those little green sticks my Mom uses in the garden to keep the Rabbits from nibbling the flowers might do it. Dr. K surfed the Internet and found an Owl Car Alarm, and I suggested creating a Scarefox, a concept no one had ever heard of.

“It’s a Scarecrow that is dressed up as a fox,” I informed them. “It has to be particularly frightening to a Rabbit. I have a moth-eaten velvet coat with a rabbit collar. They’d get the message that if they didn’t acknowledge the term of the lease had expired, they could end up in my costume closet.”

Which is a terribly cruel thing to do to a Rabbit, because the fact is — they are rabbits. They’re furry. And cute.

That’s why I think the better course of action would be to adopt the Rabbit as a pet, which gives rise to the bigger question: what do you name your pet Rabbit who you would prefer find somewhere else to live, but know — deep down in your heart — that they’re so cute and fuzzy that it would be nice if they stayed. 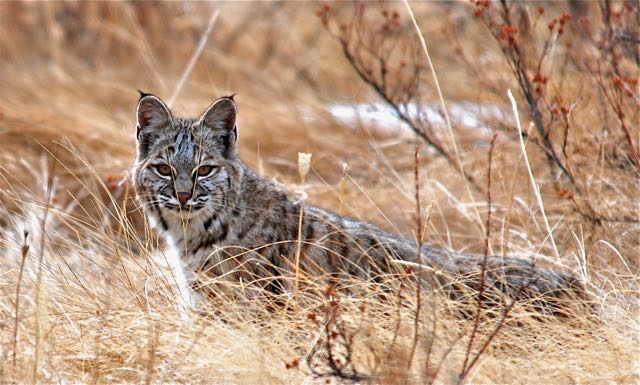 Even wild animals seem to need names, or at least, that’s true according to human thought. This is Bob the Bobcat. Photo courtesy of Gilbert Anderson.

Meet Fido – The nesting varmint in my Chevy engine

Pet names are tough. They’re individualized to the animal and its owner. Pet snakes generally aren’t named Cuddles, unless it’s a boa constrictor, and cats are less likely to be called Rover than might a dog. Pet names are generational, too. We’ve had two sets of collies, Lucy and Ethel, and the current furballs, Flopsy and Mopsy.

Whenever I tell anybody under 35 our dogs’ names, I get a blank look. They don’t get it.

“Their names are Flopsy and Mopsy. And we had a Cottontail, but she died.”

“You know, Beatrix Potter and Peter Rabbit? Peter had three sisters. . ..” I trail off.

It’s obvious I’m reciting poetry more ancient than Homer (which they recognize, because of the Simpsons).

I try again. “Well, you know Lucy — Lucille Ball, she was married to Desi Arnaz and they had a show, I Love Lucy, and —”

Shrug. It’s nice you loved your dog Lucy, they tell me.

We named our new set of collies “Flopsy” and “Mopsy”, because they looked like bunnies. Lucy became the honorary “Cottontail.” We needed to round out the trio.

I’ve looked at all the possible pet names, anything that might describe the myriad emotions generated by Rabbit Ownership. There’s Bouncer and Lady (if we can determine the gender), there’s Nibbles and Scamp. Molly is always popular with pet owners, as is Buster, Maggie and Max. And Spot. Spot is always an option. Because animals leave spots in your house.

But like the birds that return to their nests each spring, I consider the Rabbit in the Manifold to be a recurring incident. With a guarantee of warmth and protection from the elements, you know he’ll be back.

That’s why I’ve named him Fido. It means faithful in Latin. Because the shoe fits the rabbit’s foot. Or some such myth and legend.

After just finishing reading your wonderful story, I saw 2 Rabbits looking at my other car. It was cold and so was the engine, so they did not run for the warm “double bed ” under the hood. I try to discourage the warm engine home for these fellows. The engine compartment has many doors, and should they choose the wrong one, it could be a fatal mistake. Missing the air intake path to the manifold, and going directly into the engine compartment, they could end up on the guillotine of the fan belt leading to a noisy calamity from which they may not survive.

So I try to park warm autos as far from green coverage as possible, and keep the truck for a while in the garage after driving it, so to not be a temptation.

I hope your tactics will work and keep the rabbits away from what would be certain death. Your vehicles sound like they’re an attractive nuisance. Are you hiding carrots under the hood? Possibly they smell them. . .

My favorite pet names are “human” names. Our neighbor has two bull terriers named Janet and Hazel. Makes me laugh every time I see them. But my favorite was at the beach one day. Two beautiful Irish wolf hounds, bounding through the foamy tide. Their owner, leashes in hand, throwing balls for them. I heard him yelling after them and didn’t quite think I heard right – “Bill, Gloria, get over here!”. When I asked him their names, he said “My 6 year old twins named them”. I just smiled.

I will hug him and squeeze him and call him George

Name my new pet! What a cutie!!

Will chew through your wiring toot sweet.

Of course u keep it! so adorable!

I get rid of it, unless my daughter sees it and names it first. Then I get to raise it and feed it and care for it.

Doug told me once that you wanted chickens. They are fun (productive) pets! I think you can have 3 hens in town now. Don’t tell him I told you that 🙂

Doug said that I wanted them?? That’s funny. HE wants them!! I don’t know. I think I have enough animals to take care of with Flopsy, Mopsy, and Doug. Plus, first it’ll be chickens, then he’ll want a goat so we could make chèvre.

I want bees, but Jerry says no.

Of course you name it! So sweet.

Have you thought about rabbit for Thanksgiving dinner?

How would you be able to snare the rabbit inside the intake manifold? Tricky maneuvering, I think.

That’s Mopsy as a puppy. But I’d be happy with a rabbit, too.

Wow is that cute!

That is Mopsy on her first car ride. We picked them both up in Wichita, KS and it was interesting getting two puppies back home.

Darling tale.
Have a lovely Thanksgiving.

Thanks! Have a wonderful Thanksgiving, too.