We recently experienced an unexpected disaster in our basement, thanks to a frozen pipe which left six hundred gallons of water behind. As I sloshed through three inches of water, frantically dialing our heating specialist to figure out where the water turnoff was, I considered the wreck of our home theater. With kids returning from college in a matter of days, I wondered what affect this would have on our Thanksgiving holidays. One of our favorite family activities is watching movies together, new ones, and old favorites, eating dinner in front of the tv. I realized this brand of shared family time wouldn’t happen anytime soon, and my mood sunk. I considered the mess; I railed over the waste.

If I could pinpoint moments, a brief snapshot, say, of certain events outside typical daily experience which have allowed me to create a path on which I could build a philosophy, a structural guideline on how I would like to live, it’s surprising how ordinary those moments are. Early on in adult life, it was the acquisition of a puppy. A few months ago, it was listening to my son, who encouraged me to take up running. 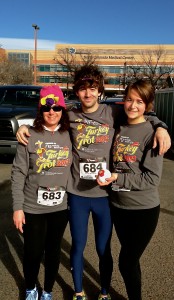 The First Annual Two Brats + A Mom 5K Turkey Trot. Five months ago, I couldn’t run a tenth of a mile. It’s amazing where your kid’s suggestions (and encouragement) might take you.

Back in 1987, Dr. K and I brought home a two month old, yellow-furred mutt from the Denver Dumb Friends League, soon after we’d signed a one-year lease on a condominium loftily named The Hunt Club. Wedged in amongst street after street of pressboard, two storied dwellings angling to take a shot at exclusivity, The Hunt Club’s only claim to fame was that it edged the Highline Canal, a paved path which ringed Denver proper. It was cheaper than the stucco-and-wrought iron condos down the way, the ones I lusted after, because, in their concrete and clay-roofed solidness, they represented illusive supremity. But, we were freshly sprung from grad school, living on a tight budget. It was enough that we could lay claim to a garage, and two whole stories of (shoddily constructed) living space. It was only natural that we headed straight out to the League to find an animal to complicate things.

My mother was encouraged by the new addition to our marriage, because for her, harboring another living being was surely the precursor to grandchildren. While Molly the Mutt did eventually have a human brother and sister, she figured more importantly in getting us out of the house (and onto the canal for exercise) rather than our eventual decision to procreate. If dog ownership prompted us to head outside, away from the textbooks we had slavishly adhered to for years, adding children simply pushed us off the porch.

This is not about dogs, cats or children. It is more about allowing a thing extrinsic to yourself push you towards trying a different way of living. This is also not another 50-year-old experiencing a Chariots of Fire moment, although I find I truly enjoy running, although, if you’re a stickler for terminology, I suppose it would be better to call it  “slogging.” This is about adaptability, and outlook. 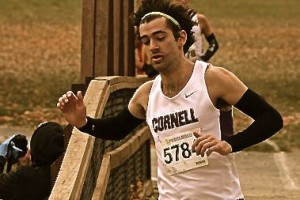 We recently took a whirlwind trip to Minnesota to watch our son, Harrison, run Division III Regional Cross Country. It seemed a bit crazy, traveling that distance to spend four hours together. In the long run, I think it was time well allocated.

Growing up, I was fortunate to have two grandmothers, Anna and Gertrude. They were both of a similar age, born in 1908 in the month of October, and both determined women in that they were each intent on outliving the other. There seems to have been some unspoken pact between them; they couldn’t admit to a goal which necessarily had a poor outcome for one, but it was there, nonetheless. As it turned out, they both passed within a year of the other. (I’m not going to tell you which of them “won.”) For me, though, the most important thing was how they looked at life. One took every blow, every change, personally; these crippled her, if not physically, then in the manner in which she trod life’s path.

The other grandmother accepted life’s diversions, and made the most of them. She has always figured heavily in my thoughts, as a mentor, and even though gone, she tags my actions.

Both grandmothers lived through dark times, during World War II, one in Germany, the other, Austria. They both lost much of importance in their lives, whether it be family members, personal property, professional status or national identity. Both created new identities here in the United States, and they both left lasting impressions. Anna preferred to look inward, caring for her inner circle of remaining relatives. Gertrude took on the rest of the world in her role as a woman physician in the day when that was an anomaly. There was no day when she didn’t make a new friend.

Gertrude taught me to wear suits with lace blouses and pearls, spritzed with Chanel No. 5. She encouraged me to try new activities, for fear of leaving an experience untouched. She counseled that every person is special, and has a story worth listening to. If she dropped chocolate chip cookie batter on the floor, she scooped it up with a laugh, saying, “It vill all become sterilized in ze oven,” in her crisp Viennese accent. She encouraged me to look outside of myself. She knew it was essential to never stop trying. 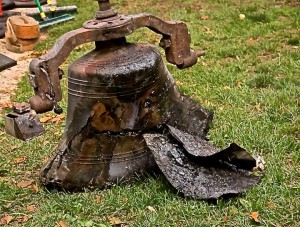 Crumpled by lightening, it’s good to know that a new version will ring again in the near future. Cornell College, College Hall bell, which dates to 1882.

A few months ago, on September 7th, a bolt of lightening struck the cupola on College Hall at Cornell College in Mount Vernon, Iowa, where my son is a senior. The power of the strike destroyed the cupola, and melted the bell, which dates back to 1882. I recently heard that the college is restoring the cupola, and will create a new bell.

“Do you suppose they’ll ring the new bell?” Dr K. wondered out loud, as I told him the story.

Our basement is dry now, thanks to the dedicated efforts of a cleaning company who specializes in such types of human messes. We’re in the process of replacing equipment and furniture, but these things all take time. But, this latest disaster didn’t dent our weekend together with our college students. Instead, we discovered new activities to try together. In a way, this unexpected (and unwelcome) event created greater closeness. In a way, it once again pushed us off the treadmill.

Cranberry Daiquiris For a Crowd

The Feeling is Mutual. I Want to Come Back as a Ptarmigan

Hi Em
Amen! Of course this article brought years to my eyes.

I enjoyed your article, Emily. We tend to remember those events that are outside the loop of ordinary, and I expect that your Thanksgiving 2012 will be one you won’t forget. Judy

Wonderful writing, Emily, and your observations are well worth more time spent discussing them. I really like your Grandmother Gertrude!! CC

She was an inspiration!

Wonderful article and attitude, one often needs to overcome outside unexpected forces, and you and your immediate family found the strength to overcome the unexpected. I am proud and pleased that you took up the attitudes of your Grandmothers who in their ways had to do so, and this is the way to overcome adversity.

Right on! Oddly enough we too were discussing strenghs and weaknesss of humankind at dinner.

Missed you at the Turkey Trot. Maybe your picture should be named “Two normal-sized people and one Shrimp” race. (Couldn’t resist — but that is what struck me most from knowing the kids when younger!) Mike ended up walking, rather than “trotting,” with your dad and really enjoyed their conversation.