I’m excited.  My daffodils are opening, showing hesitant yellow, brown paper-wrapped heads. The hyacinths are nudging the dirt in their blunt way, and I can even see rounded, swirly tulip leaves, shy, but I know they’re there.

I love spring.  You might say it’s my favorite season, but then, if you know me, you’ll say, “Oh Emily.  It’s not your favorite.  You love all of them equally.”  Of course, you’re right.  Living in Colorado as I do, I have this tremendous opportunity to experience each of the four seasons, every year, fresh and new.  I relish all of their differences, but for me, spring brings the most promise.  And work.  It means that in a few weeks, I’ll need to get down in the dirt and do my very least favorite activity of the year, cleaning out dead debris to prepare my gardens for planting.  What keeps me going through all of that dusty, muddy work is the thought of pulling my bicycle off the trainer, and riding outside, on the roads.

I have been biking all winter.  If you can call sitting on a trainer in front of a television “biking.”  For me, riding means going somewhere, seeing the world and having the wind on my face.  Breathing in a variety of scents.  Slogging up hills and then zooming down, watching to see how fast I can get my tachometer to go.  It doesn’t mean saddling up and being trapped in my dark basement in front of a screen.

I know.  I did get some exercise.  And, I watched movies.  Since I strapped my bike down around Thanksgiving, I’ve had the opportunity to watch the following:

–“Six Days Seven Nights“, which is a chance to evaluate how vacation packages lure travelers in with that gig.  I think I spent the first twenty minutes or so of the movie considering why vacations are billed by length. Don’t you think it would be better to bill by experience?  For example, “come to our island and be surrounded by beautiful surroundings, gorgeous accommodations and the slight possibility that you’ll be eaten by giant ants.” Or some such draw that ratchets up the adventure factor.  But then, I became engrossed in how Harrison Ford and Anne Heche were going to get off that island, surrounded by pirates and no rum, and gave up counting days and nights.

–the entire BBC version of “Pride and Prejudice“, which logs in at 6 hours.  I pretended that I was on tour in the English countryside.  The playful soundtrack kept me going.

–a mini-series of such questionable repute that I hesitate to even mention the name;

–“Annie Hall“, because I love the lobster scene; and

–“Mary Poppins“.  As you can see, I was becoming desperate for fresh air.

You’re most likely wondering, with that somewhat frivolous lineup, where did “Twelve Angry Men” fit in?  Well, for starters, I’d just finished reading Justice Stephen Breyer’s “Making Our Democracy Work”, and I was in the mood to reminisce about my law school days.  One of the first things they have you do in law school is to sit down with your classmates and watch that movie.  It’s supposed to provide a glimpse of the law’s fairness, micromanaged to perfection by juror #8, played by Henry Fonda.  It’s a great movie.  And then they hit the First Year’s with Contracts, Torts and Civil Procedure, and you forget about Fonda’s acting in the effort to keep your head above water.

You begin to understand fairness and purpose, firsthand, as a lowly cyclist.

Up until the 1970’s, bicycles were considered as toys; rules of the road did not apply.  With the energy crisis in the ’70’s and the increased focus on conservation of resources, biking built in popularity, to the point where non-motorized vehicles were seen in a beneficial light as a means of transportation, and were not solely for individual recreation. Western states began to develop biker friendly legislation, requiring that both bikers and motorists respect each other. Bike organizations across the country market this campaign as “Share the Road.”

In Colorado, Colorado Revised Statutes Title 42 governs rules of the road, providing guidance and regulation of vehicles and traffic.  Section 42-4-1412 covers “[o]peration of bicycles and other human-powered vehicles.”  The statute details, among other things, a biker’s duty to communicate with turn signals to others on the road, where it is safe (and legal!) to ride, and when you may ride alongside another biker.  Bottom line, if you ride on the road, you are responsible for your actions no differently than if you were driving a motorized vehicle. Violations are met with citations, and fines.

Similarly, there are duties that apply to motorists, the most important of which is that a car must stay at least 3 feet away from cyclists.  If there isn’t room to pass a cyclist, the car must wait until there is space and an opportunity to not crowd or startle the biker.  This makes a lot of sense; if you’ve ever been caught in a windswirl (more specifically, a “wind suck”) on a bike, you know just how much you need your space.  Close calls are scary when you consider that all a cyclist has for protection, other than a helmet, is. . .nothing.

For the most part, motorists are cautious and respectful.  However, here and there, one runs across one angry man.  We did, on our first ride out last weekend. 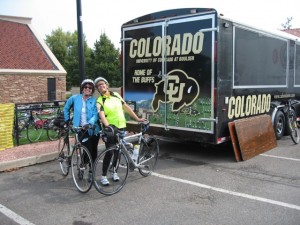 Riding the Buffalo Classic is an experience not to be missed!

We were riding in downtown Greeley on the streets.  Parking spots line both sides of the shopping district, and we have to ride single file in the lane, rather than on the side of the road.  I rode in front, because I’m slower; if I let Dr. K. go first, he’ll leave me in the dust.  This is supposed to be a togetherness activity, after all.  As we crossed an intersection at a stoplight (it was green, we were behaving) a driver came up behind us, and decided he was going to pass on the single lane. Realize that, if we had been in a car, the driver wouldn’t have been able to do this; there were parked cars to both sides. He nudged past Dr. K., within an inch, trying to pass us.  Unfortunately, this raised Dr. K’s ire (that’s a mild description of it) and before I knew what was happening, he’d hopped off his bike and was running alongside the SUV, waving at the driver to stop.

If the driver had been pleasant, and apologized for coming so close to us, we would have gone on that morning. Instead, he stepped out of his truck, and walking towards us with swagger, declared, “I did that on purpose.  You bikers are so arrogant, you think you can do anything you want.”  He glared down at Dr. K., and embarrassed, I said, “let’s go.  I want to finish our ride.”

No luck.  Dr. K. called 911, and within 10 uncomfortable minutes, a city police officer arrived on the scene and gave the driver a 3-point citation.  The driver had violated the 3-foot rule, obviously.  More so, when you menace a biker you are guilty of careless driving; if such actions cause injury or death, it is a class 1 misdemeanor traffic offense.

This isn’t an isolated incident.  I’ve heard of motorists swerving into cyclists, trying to push them off the road. A few friends have had bottles thrown at them.  One might think, out of pure courtesy and respect for others, that this isn’t acceptable.  And yet, it does happen, more frequently than you’d think.  One of my friends refuses to ride in our county at all; he calls us to set up an outing, but only in another county.  He believes those drivers are more conscientious. 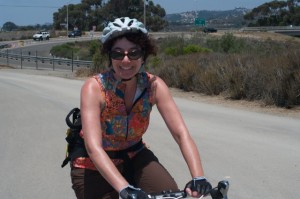 As with any law, there is no certainty that it will be followed.  Before cycling legislation was passed in Colorado, the prospect of how those laws could be enforced was a consideration. Law enforcement officers have to either observe an infraction, or rely on a “he said-she said” scenario.

In his new book, Justice Breyer instructs that the United States Supreme Court is in partnership with Congress, state legislatures and other governmental entities to create a workable democratic form of government.  The Supreme Court has its own job interpreting the Constitution, making certain it isn’t abused and keeping the other team members within constitutional limits.

Even with reasonable laws in place, it is up to we citizens to follow them.  The laws are there to guide us; it is up to us to put them into practice and make our democracy work.

March Madness is All About Chasing Snakes

Vacationing With Friends. Lifting the Veil on Family life

Strange as it may seem, an article in New York magazine tells the reader of an educated New York couple who find bike lanes offensive. In fact the woman is making it her project to video the bikers. It is a lengthy article but states that the Dept. of Transporation has overstated the benefits of the Prospect Park West bike lane by inflating its figures. Bike lanes have sparked controversy in this Brooklyn neighborhood. Weird isn't it?

I don't ride on city streets anymore if I can help it, luckily I can ride the Poudre trail for exercise. For years when I worked fulltime at the Hospital, I often rode to work by bike for fun and exercise, and had some negative experiences.

I don't like to stigmatize a group, and I also own a pickup, however, I find that too often the pickup drivers are the most discourteous, and most resentful of the traffic laws and those that try to obey them.