Outrunning Frankenstorm. Living On the Edge of Insanity

There are circumstances that blow into our lives which illustrate the futility of planning anything. I harbor aspirations towards organization, of being in control of my intentions, when what I should truly pursue is the science of fluidity. Last week gave me a lesson in divergence, and what I learned is that the mind is an amazingly elastic organism. It all began at a party, Friday, October 26th, when a great number of us gathered to celebrate the End of the World. At least, that was what was printed on my invitation.

Granted, the people with whom we gathered celebrated tongue-in-cheek; the point of the party was a farce. Some sage had predicted October 26th to be IT, an enforced coming to terms with whomever one might believe holds the celestial drawstrings. While privately, no one shared if they agreed with such a profoundly declared destiny, the majority of us did believe it was the perfect opportunity to hang out with cohorts and drink lemon drop martinis.

Halfway into my first glass, and deep in conversation with several friends, one stated that she’d recently returned from a week in New York.

“We’re headed there on Monday!” I exclaimed jubilantly (lemon-drop martinis will lend jubilance to any conversation).

She gave me a quizzical look, and asked, “Really? This Monday? Like, in two days Monday?” 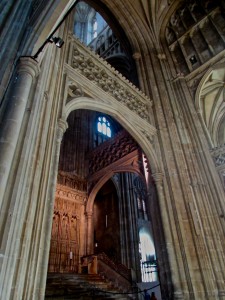 At times, the paths our lives take are as intricate and hard to follow as the lines in a cathedral. Canterbury Cathedral, Kent, UK.

I nodded happily. It had been a long time since Dr. K and I had had a real vacation. “Yes,” I chirped. “We’re going for research, for two novels!” (A two-novel research expedition being better than one, in any instance.) “First, we’re heading to Tarrytown, and its neighboring hamlet, Sleepy Hollow (of Headless Horseman fame), for my book-in-progress, Drinking the Knock Water, and then on to Manhattan, where my friend, Iron Girl, is running in the New York Marathon. That’s for a book down the road, probably Book 4,” I told the group.

“Um,” she interposed. “You’ve been following the news? There’s a hurricane heading that way.”

I explained that yes, I had read about Tropical Storm Sandy, and knew that several people had lost their lives in the Caribbean. She shook her head a vigorous “no.”

“It’s growing bigger, it’s all over the TV, (which I don’t watch, I mentioned as an aside), and it’s predicted to make landfall in New York. They’re particularly worried about the surge,” she noted. “I think they’ve renamed it now, they’re calling it Frankenstorm.” We laughed at that, remarking on how poetically cruel it was, the next week being Halloween and all.

“Well,” I remarked. “I did receive an email from one of our ‘haunted house’ tours, that they were shutting it down because of ‘inclement weather.’ I figured it was just a bad rainstorm. . ..” We all shrugged. “Inclement” carries different weights and meanings, depending on the source.

The evening wound down and we all headed home into a balmy Colorado night, the stars strewn like fairy dust across a velvet Halloween princess costume, close enough to touch, if standing on tiptoe. They glittered goodnight, bolstered in brilliance by a couple of vodka-laced glasses of lemonade. As we made our way home, Dr. K began fiddling with his phone, surfing the galaxy. He pulled up a satellite picture, a large white swirling mass streaked with venomous portent, and showed it to me.

“I don’t think we’re going to New York on Monday,” he said. 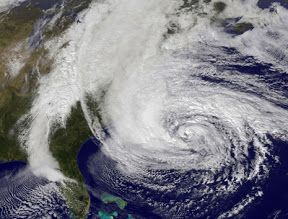 This is about the time when a person’s chest collapses, the wind knocked out of it. Shoulders slump, and a leaden weight presses down, predicting tears, ultimately. I thought of all the plans I’d made, starting way back in April:  reservations at restaurants and hotels, a ghostly tour on Halloween in Sleepy Hollow Cemetery, plotting out the commuter train schedule from Tarrytown to Grand Central Station, the iPhone app we’d downloaded to track Iron Girl as she ran through all five boroughs of New York City, as well as our own viewing points for the race, and finally, a night of jazz atop Lincoln Center. I glanced out the car window; the stars seemed remote and dimmed.

We were quiet as we entered the house, each lost in thought, preparing for bed. I contemplated the empty week that stretched endlessly in front of me, thinking morosely, “I’ll be able to get a lot of writing done instead.”

“I think we should go to England,” Dr. K announced as he brushed his teeth.

I looked at him in surprise. “We’re still going on a trip?” He nodded. 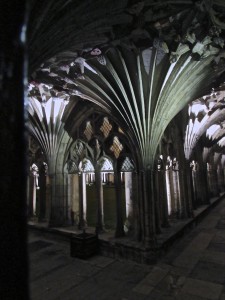 The mind plays on our worries and obsessions. In these shadows, fear can develop, blocking progress. But there is beauty, too. Canterbury Cathedral Cloisters by night.

I had been struggling with a plot point in my novel, stuck as writers get as we tussle with how to resolve a situation in the most meaningful way, while keeping the story alive. In a sense, I’d been wrestling with my own Headless Horseman. Every story has one, an overshadowing something, a problem which threatens to submerge reality, tormenting progress, creating a tumult of unsolved mysteries. The belief in a Headless Horseman isn’t spectral, as neither are people’s fears and paranoia. I had hoped the trip to New York would help me figure it out.

Much like a storm surge’s “bounce” of water when one route is blocked, his suggestion opened up a flood of ideas once the pathway was redirected. “A good portion of the book takes place in England!” I told him needlessly; he already knew what the story was about. We had intended to research New York, to walk the streets where my characters lived, and smell the smells, an essential element in storytelling, I believe. I had planned to work off of recollections of previous trips to England, never imagining we might be able to work off fresh impressions.

“Let’s do it!” I cried. (The lemon drop martinis were still doing much of the talking.) “Except –” I hesitated, “we’ll be flying right into the hurricane.” 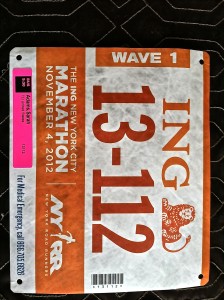 The Marathon that Frankenstorm Ate:  Iron Girl arrived in NYC Friday afternoon for the Sunday race, only to learn at 5:16pm in a taxi from the airport that Mayor Bloomberg had just cancelled it.

We raced for our computers, I obliterating every aspect of the New York spectacle, he attempting to nab tickets to London. Fifteen minutes later, he had learned that our airline was recommending canceling flights to New York (and waiving change fees), that British Airways had two seats available, and he gave me the thumbs up. Off I went, booking hotels. I knew exactly what itinerary we should take. It all surged into my head as channels opened:  London, Canterbury and time spent on the Chalk Cliffs, those great white borders edging England. The end of October is off-season there, and it turned out our trip across the pond would be less expensive than staying in the States. Thanks to the miracle of the Internet (and a touch of insanity), by ten o’clock the next morning, everything was reserved and off we went.

The week in England was invaluable, and yet, we spent time looking backwards over our shoulders, monitoring the situation at home. We watched the storm as it inched its way towards the Northeast, worrying about relatives and friends on the coast. There was the question of what Iron Girl would do, having spent so much time and effort training for the New York Marathon. We kept up with newspapers, our eye on the storm and its messy aftermath, the human suffering we had narrowly avoided. I suppose we could have headed to New York a few days after the storm, but disaster tourism isn’t my style.

Frankenstorm, now billed as Superstorm Sandy, provided us with a break from reality. Faced with an unscheduled week (if compared to the full roster of events I had planned for the trip to New York), the ability to ramble around England, to wherever our thoughts might lead, was liberating.Watch the Video: Finding Peace of Mind on the Edge of Insanity

As I stood on the edge of Britain, buffeted by a brisk wind, contemplating a bluish hump on the horizon which I knew was France, I had a sense of standing on the edge of insanity. There will always be a Headless Horseman to outrun, in any situation life throws at us. Why not make the best of the experience? We may be able to put our ghosts to rest in the process.

Love it !!!! The scheduled one (who has an ironing day), the empty nester, the world traveler…. among other marvelous traits….
went spontaneous. It sounded like a marvelous turning point. Good going you ALL !!!!!
sooz

Emily – great blog! Do you think the spontaneity of the new “trip tick” contributed to a great journey? I loved reading every aspect of how that unfolded, with the exception of the cause of course. Looking forward to your next literary masterpiece!

I think the fact of an unplanned week was a big factor in allowing my mind to relax and absorb information, as well as subconsciously working through major themes for the book. It’s something I hope will happen more often (spontaneity, not horrific hurricanes…).

Yea, Roger’s lemon drop martinis made it into your blog–maybe you need to post another recipe-ha ha!

Send me the recipe for them and I’ll put it on the blog. Roger can even have naming rights. A pic would be great, too!