Flying the not-so-friendly skies has become more stressful than ever. But we don’t have a lot of choices to get to Point B from Point A. And while you might complain about standing in line to get through security, or about the fact that airlines charge for everything other than a cup of water, Problem Number One is there are a lot of people flying with you on that airplane. People you may not necessarily want to invite over for dinner.

I get that it’s uncomfortable being stuffed into the tiny seats allotted to economy class, but it’s made more so when the guy next to you doesn’t believe in personal hygiene. The decision to not shower may be a protest about the state of air travel today, but even so, the odors and choice of travel-wear continue to amaze me. Many people don’t find the need to change out of their PJ’s to fly cross country, much less brush their hair.

Flying with pets might take the stress out of travel.

The most recent flight we took was a flying menagerie. There were five dogs accompanying their owners — most of whom were stowed into cramped doggie carryons tucked tightly under seats  — and then there was Baxter. 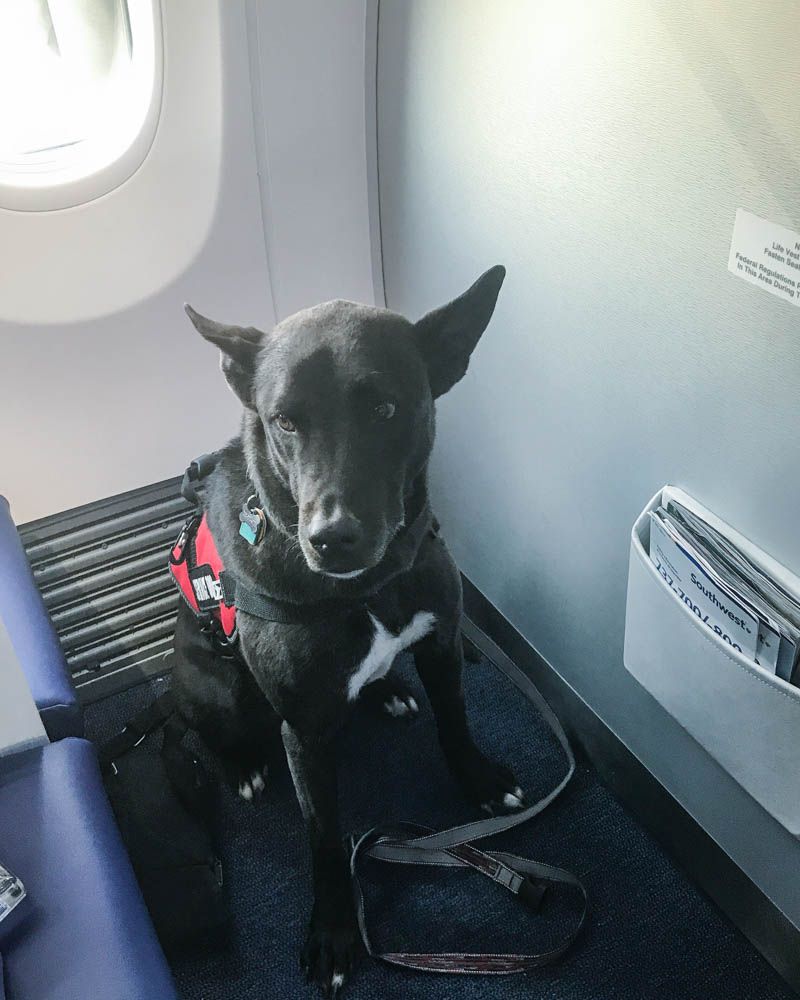 Baxter is a placidly proud black lab who’s been flying as a service animal for 10 years. Because he’s so well-behaved, Baxter gets the best seat on the plane.

I noticed the sleek black lab while sitting in the holding area, waiting to board our Southwest Airlines flight to NYC. In case you’re unfamiliar with this term, the holding area is the cavernous space where airlines park people while they’re trying to find out if they actually have a plane to transport you to Point B from Point A. If you consider the size of the airplanes they intend to stuff all the people into, the size of the holding area is ludicrous. Airlines learned the concept from Italian sausage makers: you keep squeezing and they’ll get in, somehow. Except sausage tubes have more give than airliner walls.

Of all the airlines, Southwest has this aspect of population transference down to a science, possibly because they’re a bit more democratic than the other companies. Travelers are assigned a number — everyone gets one — and then people are expected to follow the rules. And people do adhere to some rule threshold, because although they may not have taken a shower, they have learned through previous experience that while not showering doesn’t deny you a seat on an airplane, bad behavior while standing in line assures you will not get one. There’s no one cracking a whip, no one holding a gun to your head, and yet, people get in line according to their allotted numbers. Sometimes, I’m truly astounded by how well-behaved people can be.

Except when they aren’t.

Several flights ago — I can’t remember which one but suffice it to say the trip stands out for its lack of serenity in this day and age of unsettling flights — there was a ratty-haired family of four who sat in the row behind us. Not the entire family; Mom opted for the seat across the aisle, leaving Dad in charge of two children, aged 6 and 8, or thereabouts.

The next few hours was horrific. There was no demonstration of sibling affection, but instead heated insistence on perceived ownership of a hand-held video game. Rather than doing battle between warring Ninja turtles (or whichever animals capered on the four by three inch screen), and in spite of the milquetoast pleas of the father attempting to control his offspring, the siblings opted to do battle between themselves. One loudly declared the video device was her property; the other pinched, pulled hair, and took action in any way she could think of to achieve dominance. Kicking seats in front of her, screaming at the sister, and sobbing were all part of the miniature warrior’s arsenal. Through it all, Mom-across-the-aisle remained immersed in her novel. 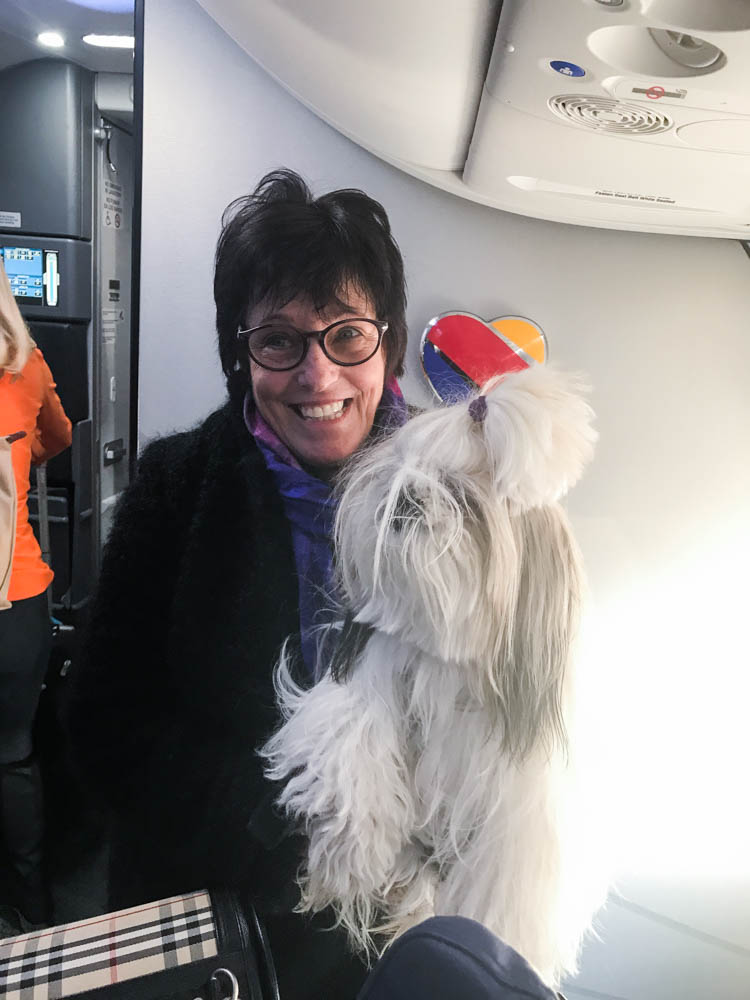 Minnie loves to travel and even more so, willingly posed for photos while people disembarked from the airplane. Her owner was happy to pose, as well.

Pets are much better behaved on airplanes than many people.

Which is why people should opt to travel more with pets. Animals are a known mood enhancer. They are also much better groomed — Americans were projected to spend over $5 billion on grooming and boarding in 2017 — and lightyears better behaved than many people. Pets have the ability to smooth the graphite edge humans get when exposed to the tumultuousness of daily life created by exposure to other humans.

While little dogs can fly tucked under the seat (for a fee), airlines have exceptions to the rules that large animals must be crated and stowed in the belly of the plane. Called “service animals,” we overwrought humans rely on them to calm us down. The animals, who are much wiser than we, get it and do a very good job.

Case in point: for the last half hour of the flight we shared with Baxter, an 8 week old puppy yipped and chattered little barks of worry. Its eustacean tubes were plugged and foggy; the dog’s human companion was unable to explain to the dog why. Over the rattles and humming noises of the airplane in descent, I could hear the puppy —barely —, but wasn’t sure where the muted yips were coming from.

Suddenly, from the front of the plane came soft woofs. Baxter, placid, proud, and a 10-year flight veteran, woofed soothing woofs of response, intended, no doubt, to calm the distressed pup.

Back and forth they went, a quiet yip (“can someone please tell me why my ears hurt?”) with a soft woof following, continuing until the plane landed. We passengers listened, enthralled and enchanted by the animals communicating. Once we landed, on the way to the rental car area, we spotted another five dogs in various attitudes of lounging, waiting, observing, and patiently accompanying their humans.

We have two collies who grace our lives with their presence. I think they would love to get their wings. 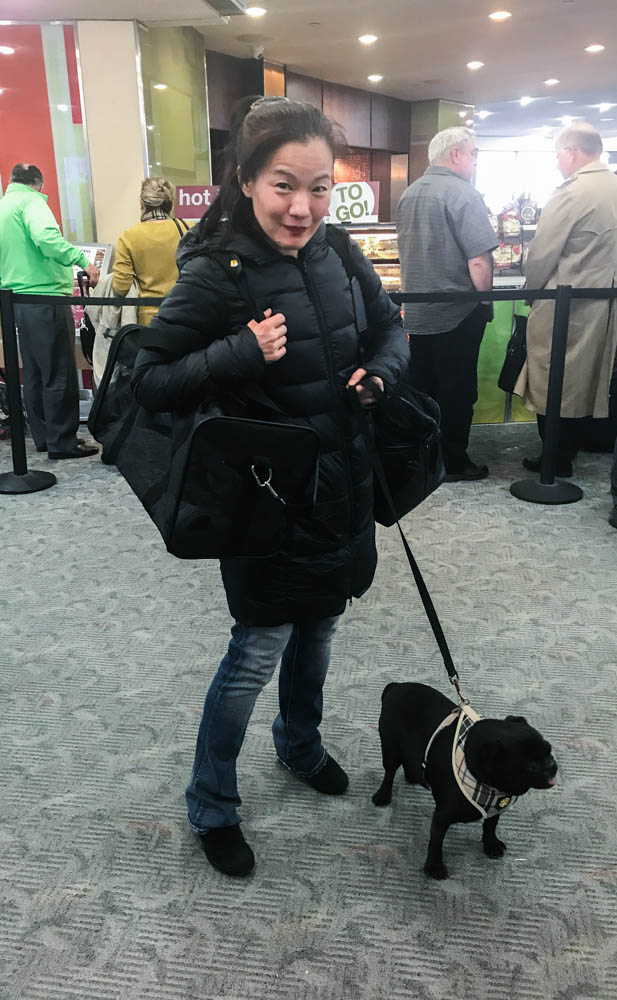 Award-winning author Emily Kemme writes about human nature, which more likely than not includes poking fun at herself. Follow her on her blog, Feeding the Famished,  https://www.facebook.com/EmilyKemme, or on Twitter @EmFeedsYou . Life inspired. Vodka tempered.

Love this Emily—and really agree about the the comfort and sweet nature of dogs, although after the recent airline errors causing serious problems for pets and their owners, I wouldn’t risk my Lab on an airplane…I doubt he’d be very happy if he ended up in Japan!

That must have been a trying time! This must be a new trend