In Search of Sushi Tora

Have you ever reached a point in your life where you’ve become so enmeshed in a process or activity that you discover you’ve lost sight of what was important? Where you’ve focused on the little things, not realizing that it was the bigger picture that mattered the whole time? There is a point where we lose sight of who is making all the rules, and how we should apply those rules to our lives. 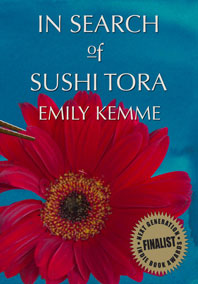 In Search of Sushi Tora is a novel about an American family. They’re hardworking, respectable people. There is a father who has attained his highest dream. He has a supportive wife, Lucy, the mother of their three sons. It all looks so perfect, from an outsider’s point of view. These people ought to be happy. And yet, we all know that happiness comes from how you feel about yourself. This is a story about what happens when people lose perspective, when their focus is shifted to how things look, when they allow outside forces to dictate what they do, rather than determining what is right for them as individuals.
When the existentialist philosopher Jean-Paul Sartre visited America in early 1945 as the American correspondent for Combat, the French Resistance newspaper, he came from a shattered and broken Europe, and in his writings from that period, Sartre painted a bleak portrait of the Americans he met, morphing Americans into one personality with little individuality. As an outsider looking in, he maintained that Americans were more conformist than we liked to think of ourselves.
It can be said there is a strong history of conformity in our country and no where is it more evident than in a traditional home. That history goes back to our country’s Puritan roots, with the expectation that women remained in the home, tending to the family’s children, staying behind the scenes. This doesn’t necessarily mean that there aren’t strong women from our past. Their actions were honored and respected by society as a whole.
After WWII, many women who had been in the workforce because they were needed to cover jobs for men away at war went back to their homes and families; there were also those who remained in the workforce, either because of necessity, or because women discovered they could be potent forces in what had predominantly been a man’s world. This was the nascent beginning of the Womens’ Movement, which has continued to grow and broaden womens’ roles out in the world.
There are pockets of women, however, for whom this development never happened. These are women who, for whatever reason, be it financial stability, religious outlook, or lack of confidence, were able to stay at home in that more traditional role which, in today’s world, tends to be looked down upon. These are women with college and advanced degrees who make a choice to leave a professional life and stay at home.
I wrote In Search of Sushi Tora because I was one of those women, and I know many more. I have a law degree, and practiced commercial litigation for several years before leaving the profession to run my husband’s medical practice from home, where it was convenient for me to make hot chocolate on demand. At the time, we had a newborn, and my interest in practicing law was not all that strong. I became active in my community as a volunteer for a variety of organizations, lending them my skills. Over the years, I chafed at taking what began to feel like a second-class status in my own home, even though I know I was successful running my husband’s practice. I wanted to strike out and do something all of my own, which for me, is writing.
My novel paints a picture of several women in this situation, and has been called “courageous and honest” because of how it approaches womens’ struggles, even in this millennium, with surprising dynamics. The protagonist, Lucy, attempts to deal with her successful, stressed, ambitious husband, a District Court Judge in a small Western town where career politics can be as nasty as in any big city. Lucy has willingly given up her law practice, where she was an equal partner with her husband, to edit his textbooks, cook their meals, and manage their three sons. There is the hope that Lucy will rise above this, and become the self-actualizing person she is meant to be; her journey towards this end is the novel’s story. Midwest Book Review found the book to be a choice and much recommended read, particularly because, in following a family pulled in too many directions, the book creates a world which poses problems which may seem all too familiar for its readers.
In Search of Sushi Tora was named a Finalist for First Novel in the 2012 Next Generation Indie Book Awards, which is one of the most prestigious book awards for independent publishers and authors worldwide.
It’s also a great story. It is a story of a woman who created a cocoon for her husband, the man she was pledged to, the man who drained her of herself in the process. Based in Colorado, you’ll recognize many of the locations. It provokes thought, and stimulates conversation on many different levels. Readers have called it “a rollicking ride,” as well as “revealing and insightful,” as it “captures the eternal conflict that educated women have of finding balance in their lives as they seek to nurture both themselves and their loved ones.”
I hope you will consider In Search of Sushi Tora for your next reading adventure.

In Search of Sushi Tora is available in hardback online:

And at these fine local bookstores:

It is also available online and as an E-reader: