We were headed for vacation in Scotland when I received advice from two friends coming from two camps of thought, both equally adamant, both diametrically opposed.

I hope you find Jamie, one friend texted  — while the other pragmatically dictated I should give haggis a try. It was two different life philosophies, certainly. Look for sex in all the wrong places. And eat sheep entrails mixed with oatmeal encased in sheep stomach lining, a dish so repellent the US Food and Drug Administration has banned its import. Never mind that the ban offends both the intrepid Scots and those of American-Scots ancestry wishing to celebrate Burns Day with their national dish. There seems to be little hope for it; the FDA has dug in its heels against authorizing foods cooked with sheep lungs ever since 1971.

Scotland has a reputation for romantic men and unromantic haggis. 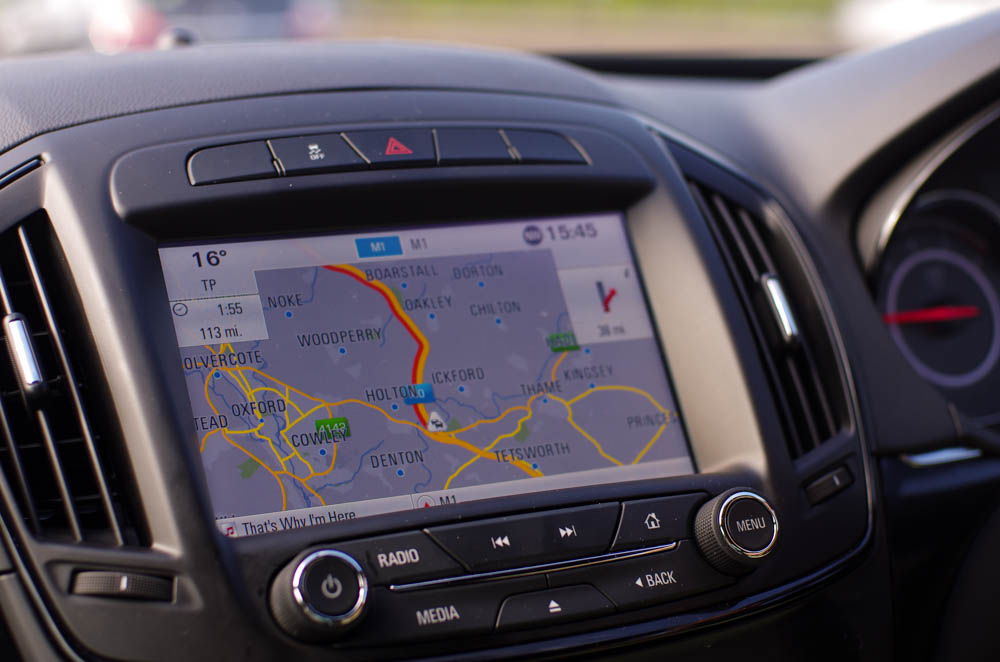 Our road North took a more laborious route than falling through a magical stone. That would have been much more fun than fighting bumper-to-bumper traffic on the M1 up to Edinburgh.

The Jamie-promoting friend and I were trying to schedule lunch over texts, hopscotching around both our calendars. I felt I owed her some leniency since I’d canceled last time due to a reoccurrence of Drowning in Book Release syndrome. She’d expressed pity for me for that excuse but this next — that Dr. K and I were headed to Scotland for ten days, the only reason being vacation — was possibly not so easy to accept. But her urging to look for the much-coveted-yet-fictional Scottish hunk was eye-opening.

First, my friend (we’ll call her M. to preserve her marital status) had always seemed one of the sturdy, accountant numbers-crunching breed. We were close in age and I marveled at her insistence that I might be so lucky as to lean against a large standing stone which — magically — would plunge me into the 18th century arms of Jamie Fraser, a kilt-wearing hottie with a literary reputation of being a gentleman with an insatiable sexual appetite.

I’m convinced part of his long-standing attraction is admiration that his kilt needn’t come off to take necessary action. As any obsessed follower of the Outlander series by Diana Galbadon knows, there is something irresistible about rakish Scotsmen wearing Highland plaid and sporting dark, curly hair.

I’d read the first book in the series but it hadn’t captured my attention. There was just too much that didn’t make sense about it. Strong woman. Leans into rock. Time travels into another century. Yeah, right. I love romance and the thought that time travel might be plausible, but this one didn’t resonate. 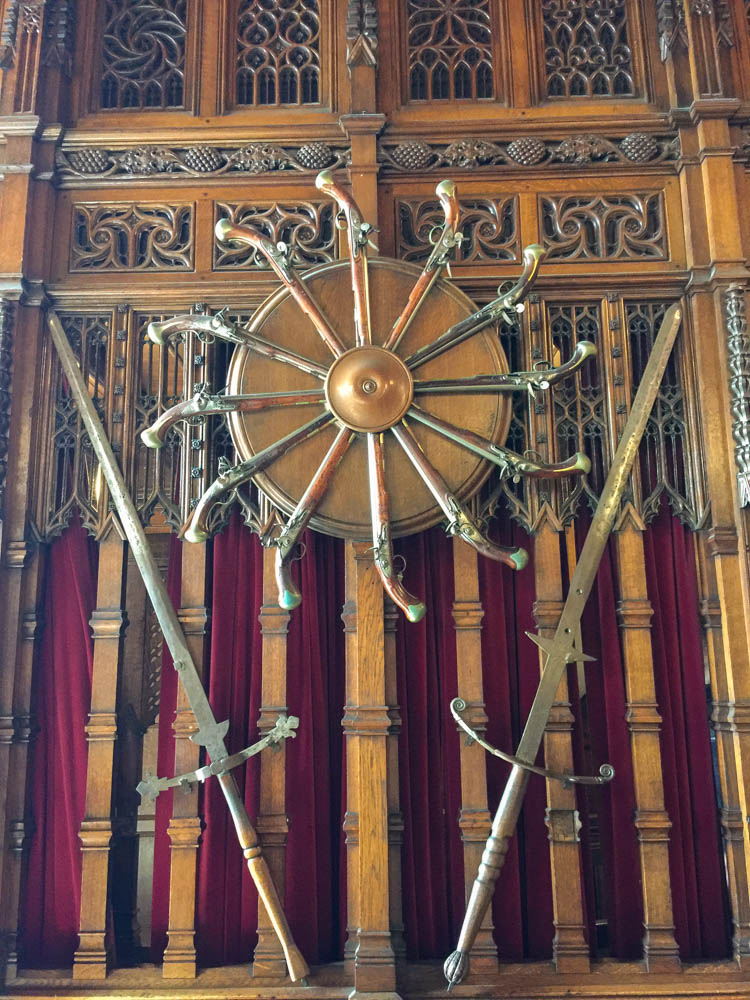 Even so, I’m aware of the intense following the series has. Last summer a friend hosted an Outlander party, with kilt-wearing, dagger-wielding, Scotch-drinking and character-themed appetizers, but we decided not to go. Not that I didn’t like the concept; the party coincided with my birthday and I had other things to do that night.

Another friend waxes dreamy about her band of women who assemble on Friday nights solely for the purpose of drinking wine and talking about Jamie’s escapades. She assures me that 99 percent of English-speaking women have fallen deeply in lust with him. It’s interesting: all these women are married.

On a certain level, I get it. Who hasn’t occasionally fallen into a trance of desire when reading a book?

In my teens, there was first D’Artagnan, the youngest of the four swashbucklers in Alexandre Dumas’ musketeer saga. I was secretly happy when Constance died; there was hope for me in a sequel. I had a long-suffering hankering for Rhett Butler, too. My best friend and I took turns reading scenes from Gone With the Wind; I most often drew the longest straw to read Scarlett, leaving her with the less desirable roles of Melanie, Mammy and yes — Ashley Wilkes and Rhett. My excuse was I had Scarlett’s simpering drawl down pat whereas she was much better at the snark Mammy and Rhett dished out.

So yes, I get the romance aspect, that you can fall in love with someone who doesn’t exist. But even so, I told my accountant friend there was little chance I’d fall into a stone; she could expect me back in Colorado for lunch in ten days. Her texted reply was soundless yet wistful: “Late April very good unless I too am in the 18th century with Jamie. . .”

I searched for Jamie but only found haggis.

As we walked along the cobbled streets of Edinburgh, ancient ghosts peeping out from doorways of both castle and close, I recalled the words of my other friend who had counseled me on what to look for whilst vacationing there.

“Give haggis a try, once at least,” she’d instructed.

Torn between both directives, as Dr. K and I nibbled at the one inch square allotment of Chicken Tikka Masala, the dinner service graced us by British Airways while we winged it over the Atlantic, I told him there was no way I would ever be hungry enough to eat haggis.

Little did I know how unavoidable it was. 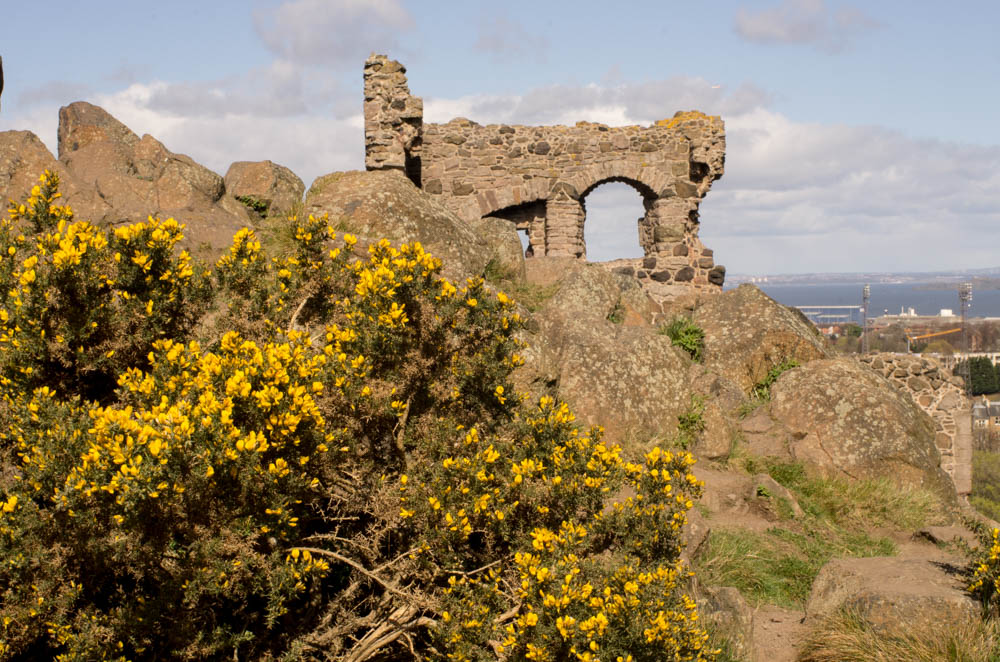 There were many rocks and stones in and around ancient Edinburgh, but none that seemed magically penetrable. St. Anthony’s Chapel ruins overlooking Edinburgh.

While there were kilted men aplenty at our hotel (the waiters and doormen were required to dress in beautiful, sage green plaid kilts or pants), none had the scruffy, rakish romanticism of Jamie, nor did they seem interested in taking me — or any of the hotel guests — to have their way with we tourists. There were castles built into rock and we hiked up to the top of Arthur’s Seat, a windblown chuff where we felt lucky not to be blown off the precipice — but none of these craggy edifices seemed penetrable, by magic or otherwise.

But unfortunately, there was haggis in every nook and cranny. It came wrapped up and oozing out of a fried wanton that claimed to be an egg roll. It was hidden inside neatly rolled balls, fried to a crunch and sparingly plated on a wooden trencher. And there was an attempt to make the sheep entrails elegant, precariously perched atop a rumbledethump — a Scottish mash-up of potatoes and turnips into which they sneak evil (according to Dr. K) ingredients like chopped kale. I do marvel at Scottish inventiveness. They excel at making up words from nursery rhymes, managing to convince the rest of we English speakers the words actually mean something. 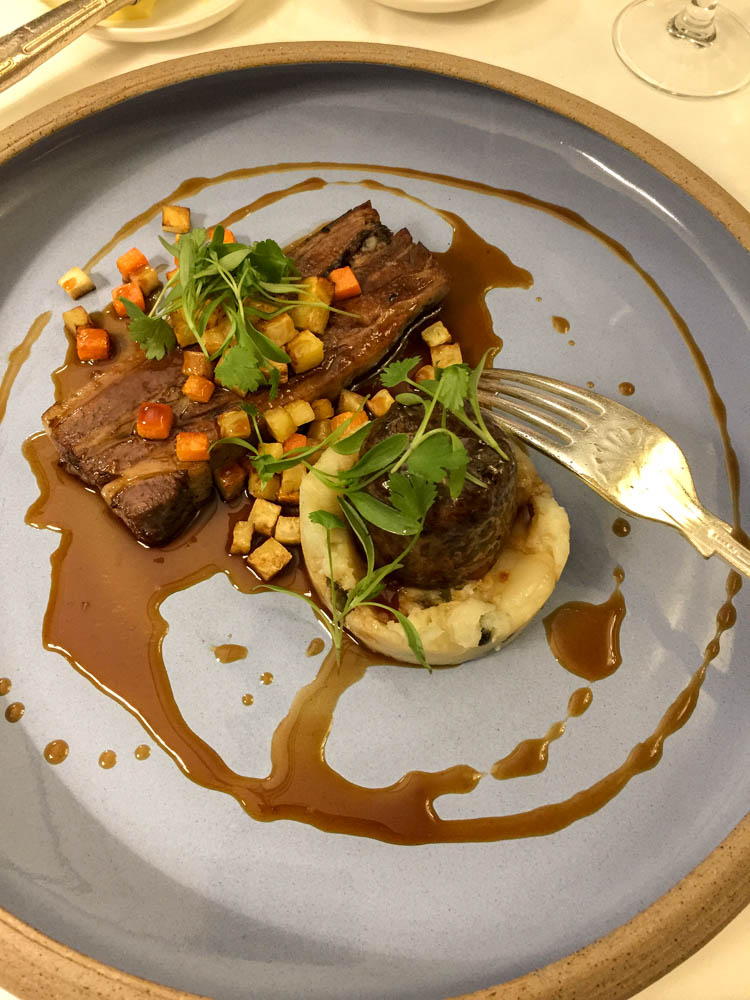 One representation of haggis that was actually very good. Not that I’m going to make a practice of searching it out, though.

I think they’re snickering behind their hands at the lot of us because we eat what they serve. It may be that they’re wondering what in the world does or doesn’t go on in our own bedrooms.

The truth of the matter is that while we don’t live in misty, windblown and oh-so-romantic Scotland, in books and in our imaginations, we can visit it frequently.

Interested in Drinking the Knock Water: A New Age Pilgrimage? Find it on Amazon and in Indie bookstores.

Loved your take on “Jamie” and his followers!! Kay

Been there, but would NOT eat it😖😖😖

Scotland is magical, haggis is wonderful!!

Loved all this series of D.G’s books. Time travel was charming, as were the characters. Learning “parts” of history in a fun way…

I saw haggis on a cooking show being made, and cooked! Not good!

I know! Although, one version I tasted was actually pretty good. I suppose you just don’t overthink the ingredients.

Loved it. I found your description of Scotland charming.