So, Who Is It I’m Hiding From, Exactly?

As I explained in my last blog post, I’m a squirrel; when expecting guests, I stuff things away into drawers and cabinets, often never to be found again.  The question about this habit which bothers me most is not which items I lose, but rather, why do I hide away evidence of my life? Why are there times when I’m certain I must show a pristine front to the world, when I race around, crazily scooping up kids’ homework, dirty socks (theirs, not mine,) sports equipment (equally guilty) and assorted papers? Not to mention clumps of dog hair.  Are you getting a good picture of my house?

I’ve just finished reading a little story by Richard Harding Davis, entitled The Make-Believe Man (Once Upon a Time, 1910.)  A wonderful friend named John, my neighbor several houses ago, gave me the book after I’d confided that my heart’s desire was to be a writer.  A teacher, and never one to push, he simply suggested that I’d enjoy reading it.  At the time, my life was consumed by a toddler and a newborn; I was also managing Dr. K’s medical practice and volunteered for several organizations.  I read incessantly; in those days reading was a release from reality.  Unfortunately, Once Upon a Time wasn’t a likely candidate for my Book Club’s list. It was relatively unknown, in spite of Davis’ reputation as journalist, war-time correspondent, author, playwright and great friend of Teddy Roosevelt.  I stuck it on the bookshelf, admiring the pretty embossed cover. 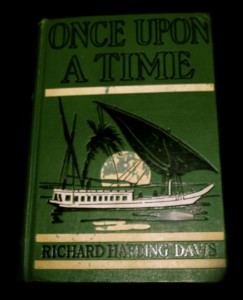 It was silly, and yet a book, sitting silently on my shelf, had the potential to make me weave myriad excuses as to why I shouldn’t dare open it.

Over the years, I’d glance at John’s gift, afraid of what it meant, worried about what lay inside its pages.  He, a man so learned, had decided that this particular book was pivotal to my education, if I wanted to be a writer.  I didn’t want to confront what it meant, what steps would I have to take to make him happy.  What if the words I discovered inside were so beyond my comprehension, that I’d only disappoint him?  So, I did nothing with it.

I entertain a dozen times a year on a formal level; this is when I hide my life away.  It typically involves polishing silver, counting plates and freaking out a bit.

A more relaxed method of entertaining began a number of years ago when my good friend Jim and his wife stopped by at my suggestion.  I was in the middle of a project, or several; they were busy working.  We ordered take-out from a local Chinese restaurant, drank wine and ate dinner by candlelight, shared from the ubiquitous white boxes.  Jim accused me of taking the concept of entertaining guests to a new low, but I knew he was joking.  It was fun, a release from the everyday, and we all knew it was just fine.  He also knew that I love to cook (and so do they) but there are times when you just can’t muster the energy.

I love inviting friends into our home, to socialize, to hang out, to be comfortable.  The more relaxed I become, the more people we invite for dinner.  They drop in, and I don’t rush around, trying to clean up.  No one has ever asked me, “wow, how can you find anything in this messy kitchen?”  The best evenings in my life have been when I let it be, when I share my very cluttered world with everyone else. We’re all so busy; if you don’t stop and say, “Hey!  Just come on over and we’ll figure out dinner,” it’s very likely that you’ll never see anyone.

I finally began writing, a couple years ago.  Over the past year or so, I’ve had friends drop by on Tuesday evenings.  I love Tuesdays; that’s the day when I’m not sitting with my nose pressed to the computer screen, ruining my manicure on the keyboard, working.  Tuesdays are reserved for grocery shopping, ironing and meeting with friends.  Tuesdays have evolved into Zen Ironing.  I stick to my rigorous writing schedule, and good friends respect this, electing to keep me company in my laundry room.  I iron, the stories go ’round, we all drink some, and the camaraderie never fails.

A couple weeks ago, one of my friends had a birthday.  It fell on a Tuesday, and I suggested that everyone congregate at our house to celebrate.

“What time should we show up?” asked several of the uninitiated.

“I’d say about five-ish,” was my response.  “I’ll still be ironing, but you can hang out with me until I’m finished.”  I’m fairly sure they didn’t think I meant what I said.

They started trickling in, some ringing the doorbell, most just walking in, which I prefer.  There’s something wrong with the bell; it’s tied in to the phone system and rings endlessly.  I’d rather have the walk-ins.

“Hello?” called the early arrivals, tentatively.  My response was via yell, “come in to the laundry room!” They’d figure it out, eventually.  Yes, it could be considered unconventional, but there is plenty of room to sit, either dragging in chairs, jumping up on counters, or even on the machines themselves.  For the regulars, they know the drill for Zen Ironing Tuesdays. That night tested the room; I think we may have had twelve people in there, at one point. 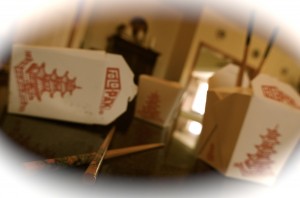 There are times when it’s fun to say, “come on over! We’ll order take-out!” Which is a whole lot better than warming up leftovers, all by yourself. Or, you can all cook together.

Sometimes I cook on Tuesdays, on others, I don’t and we order out, which is what we did that night.  It was fun, and I didn’t stuff away any aspect of my life, papers or otherwise.  I didn’t have time to do that.  No one seemed to mind.

The years have passed, and so has my friend John, but I’ve finally mustered the courage to open his book. What I discovered amazed me.  Richard Harding Davis, a man writing over one hundred years ago, spoke as if it were today.  He wrote of people, their sentiments, fears and desires.  He wrote simple stories of life.  His poignancy brought me to tears.

The short story, The Make-Believe Man, was about two clerks in New York.  One, a charlatan who dressed for adventures of his own creation, wished to present himself not as he was in the hope of meeting the fabulous, rather than the real; the other, a man acknowledging his background as the son of a fisherman, was happy to be a clerk for the moment, aspiring to greater things while living life as it was.  The two end up with an unexpected adventure, to the distress of the clerk who had hoped for such an activity.  The protagonist in the story, who ends up saving Irish nobility in a shipwreck by his quick thinking and familiarity with the sea, tells the story tongue in cheek, knowing that appearing in the guise of whom we are not, fools no one, in the end.  It lands a bit on the side of the fantastic, but the underlying sentiment rings true:  people are people no matter in which century you find them.  Love resolves all, and no one wants to look like an idiot.

As the writer I’ve become, I spend enough time with myself and the thoughts that circulate in my head. If I’ve got to make a choice between companionship and camaraderie, or cleanliness, and its enforced solitude, I’d pick the former.  Over the years I’ve discovered that pretending no one lives in this house is futile, serving no purpose other than to make me crazy.  And, it’s much more fun to invite people in to share life, as we live it. Just as it’s more fulfilling to share my thoughts on paper, with whomever would like to read them.  I only hope they will reciprocate, and share their thoughts with me, for this is the basis of a meaningful relationship.

Is It a Riddle? Or Merely Bait and Switch Tactics

I gave up ironing about the time I opened my first business, and I’ve hardly touched one since. Years ago a colleague queried my husband, “Doesn’t your wife iron your shirts?” (I guess he looked particularaly rumpled, his specialty, that day.) Bless his soul, he responded, “No, do you?”

Good blog. I certainly identify with stashing things away and never finding them again. When they do show up, it is always a surprise where I chose to put them.

Okay, you keep making this reference, and I’m still confused. What’s “ironing”? Other than this esoteric, undefined word (foreign language?) I’m with you all the way! 😉

Well, now, young whippersnapper, “ironing,” is as profound a thing as any sort of scientific experiment. If it helps you get a clearer idea of the concept, think Chemistry. Oh yes, this is an entirely serious subject. You see, you’ve got your long-chain polymer molecules which need the addition of heat (that’d be fire) and sometimes even water, in order to loosen their intermolecular bonds. Don’t get this confused with dentistry. It’s chemical reaction, pure and simple. Maybe that’s why it can appear as difficult to understand as a foreign language to some. My recommendation, should you wish to experiment, is to souse ironer with wine, the kind without the “h.” Once so attempted, “ironing” becomes as simple as “cooking.” Otherwise, it’s all Greek to me.

Your writing is so refreshing as I sit here in my living room going through the accumulated piles of potential lesson plans and gadget books hoping the holiday decorations will suddenly work their way up the stairs onto the shelves.

Arrrgghhh! Don’t even go there, with the holiday decorations. Isn’t that what the elves are for? I’m still elbow deep in turkey shrapnel as I attempt to turn 63 lbs of turkey into translucent turkey broth.

Because we want clean counters!