The Secret to Herding Cats

I have a friend named Gil whose primary goal in life, now that he has reached retirement age, is to improve me. At 53, I can walk, text, and not trip over the curb — all at the same time — and yet, he feels I’ve got a ways to go. So far, he has improved me (with Dr. K’s encouragement) enough to bike up (and down) Trail Ridge Road in Rocky Mountain National Park, (where we reached an elevation of 12,135 feet but I forgot how to breathe); to ride east over Vail Pass (just pedal and smile, he instructed, because then it looks like you’re having fun); and Ute Mountain (mini-climb of only 2,000 feet). And yet, because Gil is a cheerleader at heart, he believes he is not yet finished.

I’m not the only one Gil likes to improve. He has many friends he entices to join him for these workshops. For the most recent, a doozie, spread out over four days, he attracted friends from places as far-flung as Maryland and South Carolina to join the circus as we rode a near-100 mile stretch down Highway 1 in California. To note: simply because you point the front tire of your bicycle down geographically on a map does not mean that you have an easy coast downhill. In fact, the escapade would entail climbing 7,052 vertical feet. Gil did point out that there would also be 8,006 feet of downhill riding, so that meant more down than up, right? So I hoped, but his veiled comment that, “Going up is just like going down but it takes longer so while going up, you are going slower and have lots of time to look around at the beautiful countryside,” was troublesome. His boundless enthusiasm didn’t quite match mine, but I hoped for the best. 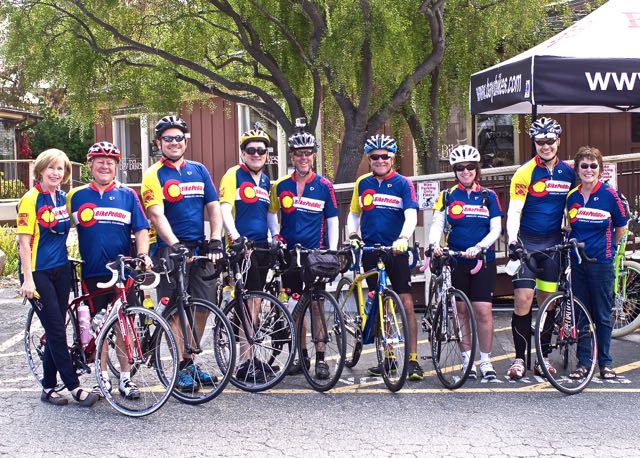 Bike gear. Check. Matching jerseys. Check. Know where we’re going? Not so much.

I observed the nine of us the night before we set out, noting a number of doctors, nurses, and artists of varying mediums. Every one of us is opinionated as hell and independent. Basically, we were a bunch of cats.

I wondered how this trip might play out, but came to understand my friend Gil knows the secret to herding cats.

Cats are self-reliant creatures, and other than the desire that you feed them, show little interest in domestication. Outwardly, a cat can appear loving and seek you out for what seems to be petting and purring sessions, but this is only to insure that food continues to regularly appear in its bowl. Cats excel at manipulation. I’m sure cat lovers out there are in heavy denial, insisting their pet is in fact a member of the family and would be heartbroken without you; based on the cats I’ve met, this whimsical insistence on cat loyalty is simply misplaced hope. 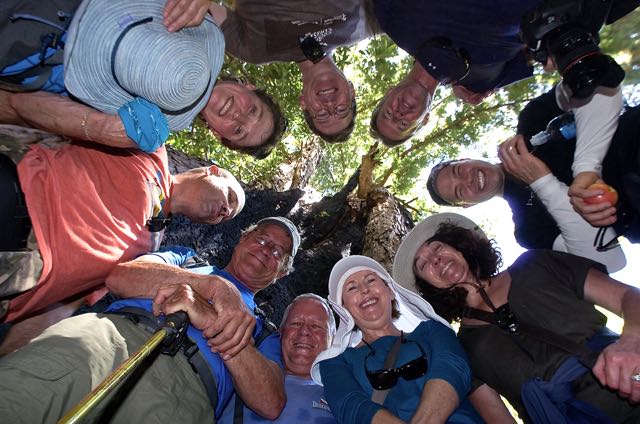 I am also aware of the many cat personalities promoted by pro-cat websites: they can be affectionate, playful, quiet, companionable, and smart. They can also be stubborn, hissy, arrogant, aggressive, and high maintenance. All the cats I have tried to introduce into our home can wear a collar marked, “Does Not Play Well With Others,” the “others” being two, large collies who assert dominance over our house and couches.

Nevertheless, I believed Gil had something going in his plan to herd eight cats down the Pacific Coast Highway. It’s pretty difficult to get lost. To your left is mountain, to your right is ocean. We were to embark at Carmel, and happily coast into Cambria four days later. Three days of riding, one day of play.

A friend in the computer programming industry once told me it’s easy to herd cats. All you have to do is show them a shiny object.

Cats are inquisitive and predatorial by nature. They love to pounce on laser beams, and will chase a shiny light for hours. I thought about the Pacific and the bright sunlight glinting on its mirrored surface. It was the quintessential cat attractor, luring us off the edge of a cliff in search of an illusive and chimeric brightness. 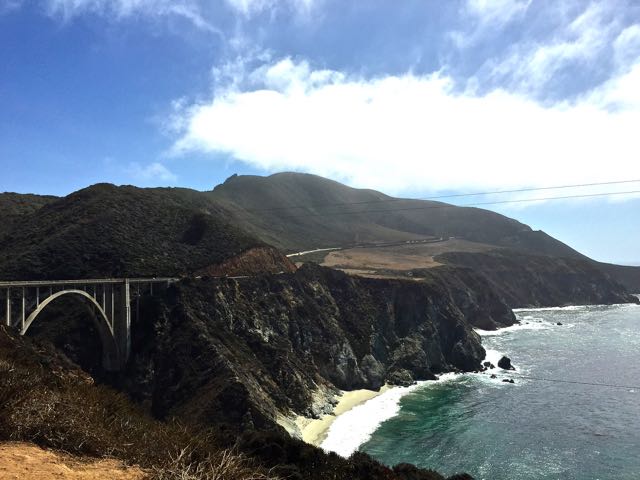 Bixby Bridge, an arched concrete bridge spanning 320 feet, was completed in 1932, opening up the coastline to year-round motoring.

That whole ocean thing was what worried me about Gil’s plans. A friend who had just returned from a trip driving the scenic, coastal road, upon discovering what we were to embark upon, cautioned me that the road had no shoulders to speak of. I recalled a statement of that sort, buried in one of the 75 emails Gil had sent to the group, one of the 75 emails no one had read thoroughly, we all admitted later. After a boisterous meet-and-greet welcome dinner on Monday night in Cannery Row, I spent the next two hours scrolling through websites on my iPhone, reading cautionary tales of Boy Scouts who’d nearly plummeted into the sea because their front tire had struck a pinecone. I read warnings about the numbers of insane convertible drivers, carelessly zigging and zagging across both narrow lanes on pleasure quests, a warm, Pacific wind tussling the long hair of their companions nestled at their sides. Romance trumped caution, it seemed, on the twisty, tortuous road that led from Carmel to Cambria. Woe betide the cynical cyclist who dared pedal its path. I fell into a fitful sleep, and dreamt of plunging into the cold and heartless Pacific after an unfortunate bike bobble. And that was after bouncing off jagged rocks and possibly being attacked by Elephant Seals. What had we signed up for?

After a late start on Day 1, with much time spent getting the nine cats suited up and bikes in order, off we set on a winding road, wending our way past majestic gated entrances that led to mansions perched on the edge of a liquid world. We climbed up and over the hallowed Bixby Bridge, a true test of lungs and legs, and gained an idea that even cycling at sea level wasn’t going to be the easy task we’d hoped.

An hour or so into the journey, I decided Highway 1 ought to be renamed Mustang Road, in recognition of the convertibles roaring along it.

As we ground along, I muddled over the question of how do you entice cats to climb up these steep hills, and risk being run over by a speeding, red Ferrari coming at you in your lane around a blind curve? How do you end up having fun?

By the time we reached Lucia Lodge on the second day of biking, it felt like the road would never end. The world was made up of asphalt, wind, and water.

I inhaled deeply. Wild fennel and mustard scented the road, even overpowering the stench of sticky tar in spots where construction rigs parked, graders and bulldozers clinging to the last inch of chipseal. In Big Sur, ocean breezes gave way to dark primordial forests, the redwoods skyscraping, and my neck ached from gazing up at them, impossibly searching for their tops. Then on to Lucia and a scrappy row of cottages linked together to keep them from going over the edge in a brisk wind. On and up, past Ragged Point, and then down to the Elephant Seal Rookery, where chunky bodies lazed in the sun and young males rousted about in the waves, learning to become champions. 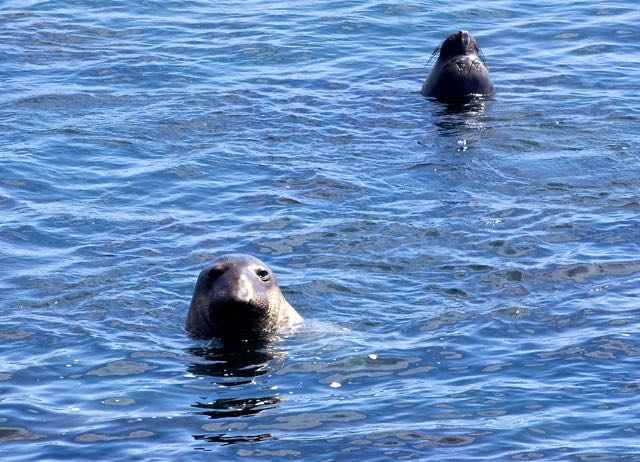 Young Elephant Seals learn how to fight during the quiet time of the season, part of the breeding cycle. But they’re inquisitive, too. Photo credit: D. Kemme

It was all there on Highway 1, all of life offered for the viewing. There was time on the bike to think, to consider, to quantify. We cats pedaled up a hill and came down a mountain, because we could, because of what we might learn about ourselves along the way, because it was there. 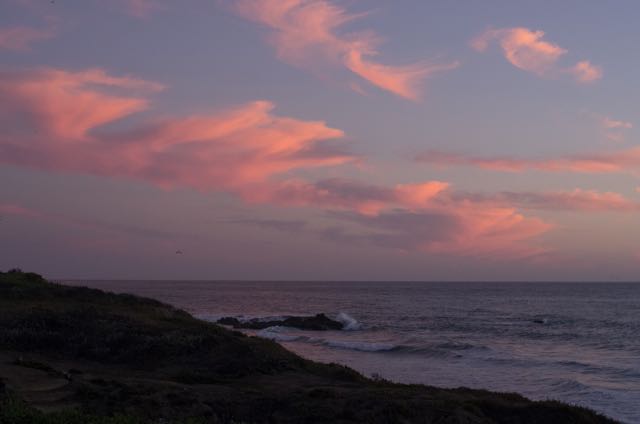 Sometimes when you ride, you start out aimless, without a purpose. You can find one in the silence that exists between you, the road, and your bicycle. And that’s why we bike. Photo credit: D. Kemme

You are brave! This impresses me so much. What a nice piece, and such beautiful photos, too!

Another great blog post, Emily. I love your writing.

One of your best!

Been all through there, but not on a bike. I would recommend Vail as absolutely the best summer vacation spot in the U.S.!

Sounds like a fabulous trip. How did you ship your bikes?

It was fabulous. We shipped them Fedex, but in hindsight now we know there’s a great bike shop in Carmel, Bay Bikes, with good rental options. Also, if you’d like the hotel itinerary, my friend Susan did a fantastic job scheduling us. She’ll give you details.

Was I the friend who cautioned you about shoulders? I can’t recall if I articulated that or just thought it …

You definitely articulated it. I really wasn’t sure if what we were doing was a wise idea, so much so that a few of us talked about scrapping the entire plan should it turn out to be horribly dangerous. It ended up fine. We had to be careful, though.

My visualization of all of you riding this beautiful stretch of the coast highway made me a bit apprehensive and forever thankful you made it safely. It seems to me that this highway is not particulary bike friendly. You should be extremely proud of yourselves.

My memory is only when we took all of you on this trip searching and finding the Hearst Castle in San Simeon and looking down on the huge seal lions when Dad worked in Templeton.

We had to be cautious, and there were a few cars who felt bikers shouldn’t be on the road (and let us know that), but that happens anywhere. We saw other bikers, too. I think it is as with any other activity: be aware of what you’re doing and stop if you don’t feel comfortable.

Interesting. When I worked in Central California Locums, we visited on the Hiway and looked down at the sea and animals, it gave me the feeling as when we hiked down the Grand Canyon 2 days, and the sensation of helplessness was the same.

I applaud all who are able to overcome that sensation and ride the “shoulderless” road.