The Thanksgiving That Time Forgot

Thanksgiving — the time of year when Americans should never contemplate running away from home, even if temporarily. Inspired by the good intention of repairing a shredded nation, President Abraham Lincoln decreed a national Thanksgiving holiday in November 1863 after a Union victory at the Battle of Gettysburg. It was dedicated to concepts of family and country.

So, if a person is fortunate enough to be able to stay close to home and family to celebrate Thanksgiving, then by all means, do it. Why consider taking a vacation that week? Travel expenses escalate during the winter holidays, the already slow lines at security crawl to a halt, immobilizing people like lava at Pompeii (angst written on their faces), flights are delayed midair (frightening), weather can be precarious (because it’s winter) — and bottom line, why expose yourself to hassle like that? The holidays are supposed to be fun!

That was always my impression of Thanksgiving, my favorite celebration.

I am a first generation American.

My parents, Dad born in Germany, my Mother in Italy — thanks only to a friend of my grandfather’s who advised my German grandparents to emigrate quickly out of Germany to avoid Hitler’s Anschluss — have instilled a love of country. I am an American, and nothing else. I owe allegiance to none other, because the United States took in my family. My safe haven is here.

I think that’s why Thanksgiving is my favorite. The holiday is nondenominational, belonging to no religion or race. And although Lincoln’s intention, following George Washington’s lead, was to thank God for blessing our country with fortune, the holiday, more than others at this time of year, relates more to pride of country, giving thanks for what we have built together. It’s the Fourth of July without fireworks, without summer’s sizzling temperatures. Thanksgiving is a more subtle patriotic holiday, but it still recognizes the undeniable benefits of liberty, freedom of thought, and other democratic tenets.

So, in the summer of 2001 when I announced to my family, on both sides, that since our children had a week off at Thanksgiving we were going to take advantage of it and travel to England, all hell broke loose. It could have been that we were not going to roast the turkeys that year. It could have appeared that we were being unpatriotic. Or it could have been that the kids were finally of an age that they might appreciate a trip across the water. I’m an attorney and an English history major. I wanted to show my children the stuff that shaped me. The stuff I thought was important.

I booked our flight to London at the end of August. Two weeks later, 9/11 happened. 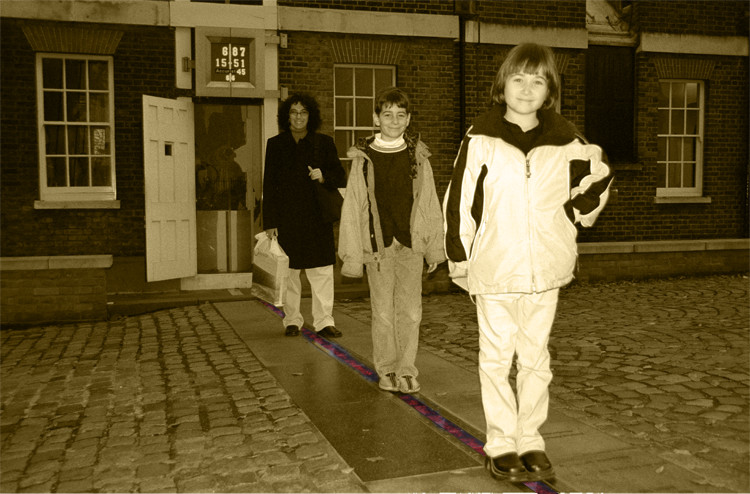 We found ourselves straddling two cultures, watching time zones on both sides of the Atlantic, waiting for the next shoe to drop. And yet, the people on both sides were remarkably similar, understanding what it felt like to be threatened, and providing comfort. Greenwich Meridian, 2001. Photo by D. Kemme

The planes crashing into the Twin Towers, the Pentagon, and a field in Pennsylvania changed all American’s lives.

We went from being a people living in glass towers to those who had to share their experiences with the rest of the globe. One world, one genome, give or take a tenth of a percentage point. In that hour of terror, we sheltered Americans discovered helplessness. And I, English History lover, lawyer, Jewish American Princess, had to decide if she felt safe enough to travel (with children) to England in a world that had turned itself upside down.

I cancelled our travel plans every week, and then berating myself at my insecurity, I rescheduled them. My family took bets as to whether we would actually embark upon the trip. British Airways hated me. Luckily, no one wanted to travel anywhere, so it was easy to cancel and reschedule, almost daily. Americans were immured in fear.

And my extended family continued to deride me; I was committing the unthinkable: skipping Thanksgiving.

After the final rescheduling, off we went. I looked over my shoulder as we boarded the plane in Denver. There were no obvious deterrents; no Saudi’s toting bombs, no one chanting how much they hated Americans. We boarded the Boeing 777, seats extending to infinity. Our fellow travelers seemed tense, but pleased; we were all off on travels, some seeking definition of existence on Earth, others chained to work schedules, some with plans indeterminate.

After dinner and mini bottles of airplane wine I began to relax. The crew dimmed the cabin lights, but there remained pinpoints of light, for those who spurned sleep, those who could not. Across the dark aisle I noted a young man, immaculately shaven, impeccably dressed; I had admired his beautiful cognac-colored loafers when I’d met him in the aisle. He sat under a spotlight, reading the Koran.

I nudged Dr. K, and whispered my fears. We were certain to be blown up. He shrugged his shoulders. “Goodnight, Emily,” he said, and stuffed his head further down into the thin pillow. It was a futile attempt, but I caught his meaning.

I tried to keep an eye on the man across the aisle, struggling to stay awake, but wine and a sleeping pill knocked me out, a chemical combination stronger than my will.

Tense seconds droned into insensible hours and then the Boeing’s lights flickered back on. We landed safely at Heathrow soon after, and my neighbor across the aisle glanced at me and smiled. The Koran lay open on his lap; his smile spoke of relief no different from mine.

Thanksgiving can be a time to pause, a time for contemplation and reflection. It can take place anywhere you happen to find yourself on the planet on that day.

All week long, Londoners welcomed us, patting us on our hands, giving hugs, providing reassurance to their shaken confederates, the weary ducks from across the Pond. The United States was at war with Afghanistan, trouble was brewing about Iraq, and still there were people of all nationalities, cultures, and races who recognized us as Americans and wanted to let us know they stood with us, and even more importantly, they understood what it felt like to be threatened in one’s own homeland. There were armed police everywhere, draped in orange riot gear instead of the expected Bobby blue, more than I’d ever seen in London, but once the rawness of it wore off, it became an accustomed part of the cityscape. 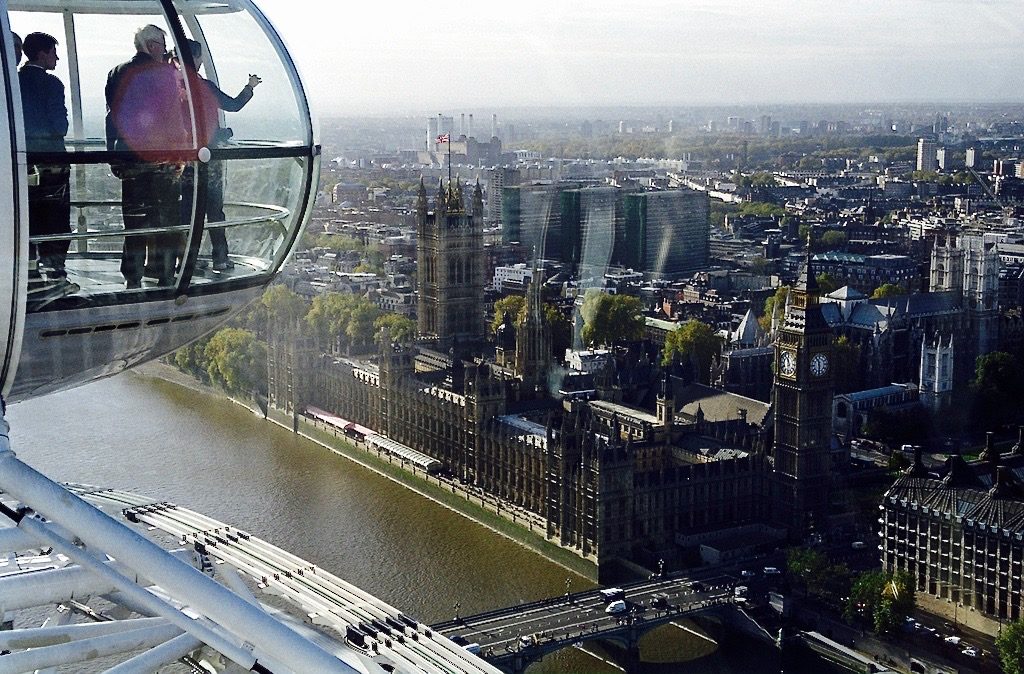 What better time for contemplation than when up in the air in the London Eye? Photo by D. Kemme

And Thanksgiving? We hadn’t expected to find turkey dinners offered anywhere (with all the trimmings, ran the happy tidings), and yet they were almost standard fare on that particular Thursday, November 2001.

We ended up at an Italian restaurant near our hotel, indulging a hankering for the comfort of spaghetti and meatballs. For us, it was the best safe haven.

Thanksgiving is my favorite too. A lot of meaning without all of the hoopla.
You do have quite the history. Your grandparents were thoughtful enough to get out thank goodness.

Thankfulness is a good feeling.
Thanks Emily.

Yea was in Westminster Co this year

I met a woman last night whose daughter arrived for a 2 month stay in Paris two weeks ago…. the girl didn’t really know anyone, but found some friends of friends to stay with for a few days. She thinks her daughter is learning an important lesson.

Paris was in my thoughts when I wrote this.

We both loved your tale of adventure and patriotism. And naturally feel strongly the same about our country who took us to safety

Emily,
Well, you’ve done it again! Wonderfully written, thoroughly appreciated by the Campbell duo from our warm/sunny AZ patio! We are very grateful to be so blessed!!

Thank you! Hope you’re having a warm Thanksgiving weekend!

Excellent! Love your perspective! And yes, I have (;