Vacationing With Friends. Lifting the Veil on Family life

Vacationing with other families adds another layer to the complexities inherent in familial togetherness, and yet, these are the type of get-aways I tend to enjoy most.  What is astonishing is that in spite of the fact that we travel with many of our friends, we still are talking to each other.

Over the past twenty years or so, we’ve developed distinct vacationing pods:  I call them the beach set and the ski set. Not to be confused with the jet set; while the beach set requires use of aircraft to arrive at our destination, we all are generally a scruffy bunch.

We unwittingly began experimenting with combined family junkets years ago, down in Ixtapa where we were hanging out with good friends from residency, Debby and Dave.  Each couple had a child, who had been left at home with grandparents or nannies and we were all dealing with mixed emotions; it was the first time we all, as fairly new parents, had traveled sans kids. At least so we thought, until Debby announced at dinner that first night that she was pregnant.

What started out as the four of us in Mexico (plus Jack, if you can count him at that point) has grown into major excursions combining four families, each with two children.  Do the math: four times four equals 16 different philosophies about leisure time well spent.

Then we have the ski set, another couple with whom we became acquainted through our kids’ friendships at school. Frère Chestnut and his wife Sophia have two daughters and a recent addition of David, who is 13 years younger than the rest, and is a wonderful addition to our middle age, keeping parenting concepts fresh and challenging.

Whether skiing or hanging out on the sand, what I’ve learned is that you never know your friends so well as when you see them before their morning coffee, in their long underwear, or sometimes, without intending it, much less.

Vacationing with friends requires enough rules and guidelines to fill several suitcases, so I think I’ll start off with the basics today and get warmed up.

EVERYONE NEEDS TO EAT!:

Eating is mandatory, obviously, but every family does it differently.  There are many factors to consider:  how often do you eat, how big is the meal going to be, just how elaborate are you going to make it (this is vacation, after all!) and, the deal-killer, what time is dinner?

I’ll tackle the biggest issue first.  As everyone knows about me, we eat dinner late at our house.  And I don’t mean 7:00pm.  Generally, I start cooking around 8 or so, which means, depending on complexity, dinner will be served around 9:30 at night.  It works fine for us, or I should say my family is resigned to it.  We’ve developed a routine around it.  I work until then, and our two kids trail in from whatever sports practice of the season it is and immerse themselves in homework.  Dr. K’s arrival hour is variable, but he’s become accustomed to doing a few odds and ends of chores, taking a little nap, and sipping scotch while keeping me company as I write.  It’s a nice winding down time.

However, if you’re with a bunch of hard core (or not so much) skiers who stomp in from the slopes around 4 or so in the afternoon, dinner generally must be earlier.  I’ve learned to compromise and on the nights I cook I make Herculean efforts to get the food on the table around 8-ish.

Which reminds me.  It’s important to take turns, not only for basic fairness, but to allow the others in the group their night to shine.  Or show off.  This can’t be stressed enough.  Part of the fun of traveling together is the opportunity to learn new cooking techniques, and best of all, it alleviates the pressure on your spouse if you happen to really mess up dinner.  I don’t know if this has ever happened to you, but once every so often, what I hope is an incredible culinary creation turns out to be an inedible disaster, requiring me to tearfully tell Dr. K:  “Order pizza! Now!”

On one such evening up in Steamboat with the Chestnuts a couple of years ago, I was oh-so-close to saying those words.  I was making “Chicken Paprika”, a tried and true friend, one of those reliable recipes which you can make in your sleep.  Except, when you’ve forgotten flour to thicken the sauce.

COROLLARY TO COOKING ON VACATION: Who’s shopping and where are you going to do it.  You have two choices:

(a) Plan your menu ahead of time in collaboration with your friends (standard for ski vacations.  This lot generally falls to Sophia and me; the guys are happy being in charge of the liquor); or

(b) Shop when you get there (beach option)

There are perils and pitfalls associated with each.  If you are obsessive and anal (both Sophia and I will raise our hands to that one), you meet several weeks before said ski vacation over lunch and plan EVERY meal down to the last bagel.  Well, Sophia would like to do that; there have been years where she assigns the number of bagel purchases per family, because she knows that if she lets me loose in the grocery store, I’ll just buy, well, everything.  Because I don’t want anyone to starve.  Sophia, who is Japanese, takes a different stance:  she excels at origami, folding and stuffing food items into their Volvo wagon, whereas I require a monster of a Chevy Suburban for these trips, reason being that I don’t want to leave anything behind.  So what if I can’t see out the back window.  We usually drive up to Steamboat at night, in a blizzard, so I can’t see much anyway.

Point being, that in the pre-shop scenario, you end up with an overstuffed car, several large coolers and a generous supply of grocery bags.  And, I always forget something.

If you go route (b), this can be interesting too.  This is the option the beach group has chosen, for obvious reasons.  I can’t check-in my Suburban; the overage fees on the weight would be astronomical.  The result of option (b) is that, soon after arriving at said beach destination, the four moms will go out to hunt and forage; the drawback is that we are limited to local flavor. When in North Carolina on the Outer Banks, the Food Lion is our best option, despite its unusual and nonculinary name.  I guess the “Lion” part is related to hunger, as in “hungry as a. . ..”  Well, you get it.  Once arrived, we divide lists and conquer, each of four shoppers wielding a large basket, crazily racing around the store, like in that old chase movie, “It’s a Mad, Mad (add a few more superfluous repetitions of same adjective here) World” to see who can reach the checkout stand first without forgetting an item on their list. Occasionally, we pass one another in an aisle, waving furiously but rolling on without stopping to check on the others’ progress.  After all, the beach and wines await.  There are drawbacks to this method as well, the most perilous being the size of the grocery bill. 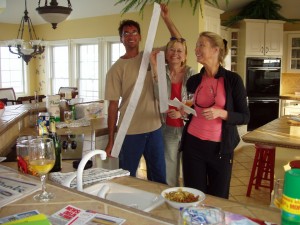 Shopping for sixteen on vacation lands a big grocery bill.

This method tends to require repeat visits to purchase fresh fish, more lemons and the forgotten paper towels (a requirement with 8 kids.)

With option (a), you learn to “make do”.  Which means that you get terribly creative.  Take the instance of Chicken Paprika a la Pancake Mix.

Standing there, frustrated as I watched eight whole chicken breasts simmering in a beautiful, coral sauce, I dipped in the spoon only to get a thin liquid rather than the rich sauce I’d produced in the past.  I’d forgotten to bring thickener, or at least make a roux to get things started.  As I moaned to Dr. K, “I think we’re going to have to order pizza,” Frére Chestnut leapt to his feet from in front of the TV, crying, “no no, I’m sure we can figure something out.”  This is one of the prime benefits of traveling with friends:  there seems to be a lot of chivalry going on and very little of the sniping that one usually deals with at home with your hungry family. Everyone is on their best behavior.

“I need something to make the sauce thick,” I whined to Frére.  He nodded sagely, took a sip of wine and began rummaging around in the pantry.  At length, he pulled out a ziplock baggie of pancake mix.

“It’s got some sort of flour in it, don’t you think? At least there’s something carb-related, right?” he asked me.  I shrugged, still upset, as I watched him spoon tablespoon one after the other into the sauce, watching as the floury substance congealed on the surface, pancakes bespeckled with paprika. 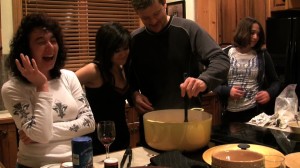 Pancake Mix to the rescue!

“Look,” he said appeasingly.  “The pancakes are smoothing and all of the lumps are coming out.”  I giggled and began to relax.  We vigorously whisked and stirred the mess in the pot for a good 15 minutes, sipping wine and laughing, until the consistency satisfied both of us.  The rest of the crew wandered in periodically, sniffing the aroma like hungry puppies.

“Don’t tell them what you’ve done to the sauce,” I cautioned him.  He scoffed at this, saying all the one cup of pancake mix had done was to sweeten it up a bit.

“Well,” I replied, resigned to the fact that I was going to have to deal with a bit of ribbing during dinner, “if they don’t like it now, we can always pour syrup over it and give it to them for breakfast.”

Facebooking: An Ode to Anti-Social Sporting

I've also forgotten to bring the thickening for yes, my Paprika Chicken. So, I walked over to neighbors I never have seen and knocked on the door. "Please could I borrow a tablespoon of flour"? …She was lovely, gave me the flour and I have never, ever seen her again. Would I go back and borrow something, you bet and I hope she comes to my cabin to borrow also. Perhaps she is not the visiting kind as I am.

I enjoyed your vacationing adventure. Bill and I are looking forward to our "boating adventure" with your folks in July. I'm already making a grocery list! Judy

Bravo, bravo! You have reached stunning new heights in cooking thanks to a bit of ingenuity! Be sure to watch for the little bubbles before you flip the breasts. 🙂