I probably don’t get as much exercise as I should. Recently, much of it comes from night sweats while I’m lying in bed having panic attacks that I’m not going to finish all my work before we go on vacation. Add to that the stomping (mental) and putting out fires while dreaming, my heart rate is raised, which really ought to count towards exercising.

Worrying if I’m getting enough exercise isn’t related to a fear of keeling over tomorrow. Dr. K and I have planned a couple of bike trips, the first to Grand Teton, the second to Croatia. The Tetons are less scary than Croatia, which we’ve heard is riddled with mountains. Considering that we would be starting at sea level, the only place to bike in Croatia seems to be up. That’s next month. If I put my nocturnal exercise into overdrive, it might suffice.

Traveling anywhere can present all sorts of potential dangers and discomforts 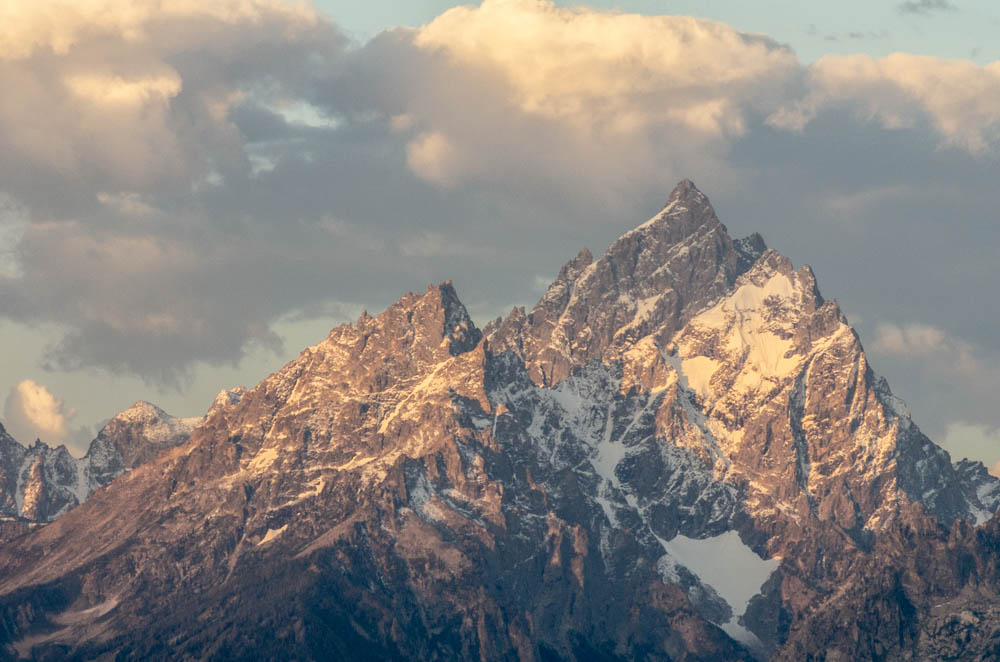 To get to the Grand Tetons, one of the shorter routes is to travel through Yellowstone National Park. Photo: D. Kemme

But a more imminent concern has doubled the night panic. We had discovered that by traveling to Grand Teton we were directly headed into a developing crisis. Our travel companions had alerted us to the fact that the supervolcano at Yellowstone National Park was about to blow. One way to get to Grand Teton is to drive through Yellowstone.

Of course, it’s a good idea to take a step back and consider all the facts. One fact is that the last time Yellowstone’s “supervolcano” — technically a “caldera-forming volcano — blew up (the technical term is erupted but I’m trying to stay calm) was over 630,000 years ago. Research points to the theory that the Rhode Island-sized caldera in Yellowstone is merely simmering; no catastrophic explosion is imminent.

Even so, I drove north to Wyoming with a bit of trepidation. If Yellowstone blows, we all blow in the wind with it — at least those of us living in a wide swath radiating out from the Rocky Mountain region. The possibility, however slim, would make those in the closest proximity the first ones to go, even if we’re on vacation. Our loved ones at home would have to wait several minutes. And the rest of the country would be covered in ash, along with many other atmospheric unpleasantries.

But scientists at the Yellowstone Volcano Observatory soothed my fears with reports that the caldera was actually stable; the seismic activity seen in all the steam vents is the earth “breathing.”

I shouldn’t have worried so much about being blown to smithereens in Wyoming. I shouldn’t have lost precious hours of sleep wrestling down worries that work would not be completed before being blown up. What I should have been worrying about were TripAdvisor reviews. Because when you’re away from home, there’s little else to rely upon to figure out where your next meal is coming from — at least until the volcano makes eating irrelevant. 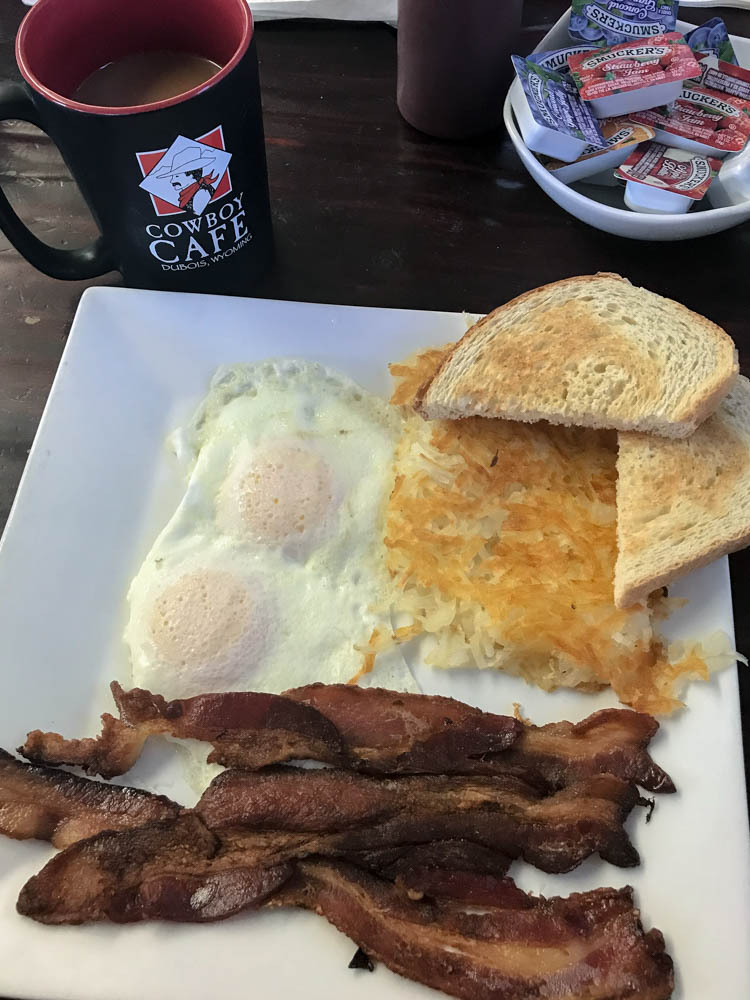 It’s hard to gauge individual tastes. That’s why you have to take TripAdvisor and Yelp reviews with a grain of salt. That means use common sense. And yes, this eggs-and-bacon classic at Cowboy Cafe in Dubois was just as fantastic as it looks. One person’s opinion, though.

Going on vacation is a bit like being in a food desert. You might get a suggestion for dinner from the hotel concierge, but it’s up to you whether to trust it. It could be fantastic — and we’ve been directed to memorable dining experiences thanks to hotel staff on many occasions. But taste is individual. It’s all about perception, the surroundings, what’s appealing to you. That may not translate to an appetizing meal to someone else. And while it may have something to do with the science of tastebuds, which are very complex as to their ability to process salt, sweetness, bitter, and sour flavors, something as basic as the decor might turn you and your dining companions off. For example, the rows of stuffed animal heads observing diners at the restaurant at Buffalo Bill’s Irma Hotel in Cody was a bit off-putting for my friend who doesn’t eat beef.

That’s why I marvel at the success of TripAdvisor.

TripAdvisor reviews aren’t always nice. I think some of the reviewers channel the nastiness spewed by those who are paid to pen discerning criticism — restaurant critic Pete Wells of the New York Times comes to mind, particularly his cringe-worthy take-down of Per Se in New York City — which amateur reviewers want to mimic. For me, someone who reviews restaurants with an eye to the fact that these are hard-working people trying to make a buck in a profession that eats them alive with competition, it’s worth it to find something good and decent to say, if you can. Silver linings, don’t be nasty, “Say something nice, or don’t say anything at all,” — whatever it was your mother coached you in social behavior, it’s all good. 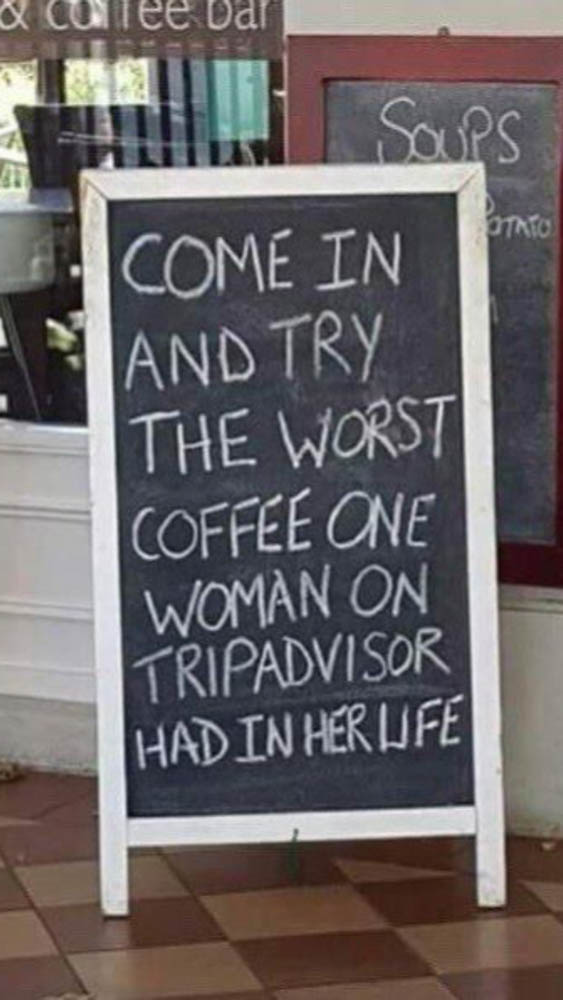 I agree there are times — very rare, indeed — where there is nothing of redeeming value to say about a restaurant. There is always room for exception, particularly a recent chicken salad I ate. If it looks like cat food, and tastes like what I imagine cat food would taste like, mightn’t it be just that? Particularly when I was sick the rest of the day after eating it.

Even so, I think TripAdvisor and Yelp, another platform for offensiveness, allow people to go overboard with venting about the fly in their soup.

Cooking generally reminds me of the warnings on TV stunt shows: “Don’t try this at home.”

Unless you have earned a culinary degree from Le Cordon Bleu. Until then, enjoy the meal and be glad you didn’t have to cook it yourself. Or have to do the dishes later. Be kind to your server, tip well, and go home (or to the hotel) and hope you don’t end up riding the porcelain Honda at two in the morning.

Celebrate the meals that leave you in awe. Consider that the rest are made by faulty humans — much as are the rest of us. Tomorrow is another day and a chance for another meal.

In other words, eat, drink, and be merry. Because I don’t know when the volcano’s gonna blow.

I had hoped that the impending volcanic eruption would occur before I had to clean out the closets and drawers this winter. However, since all I love and care about would also be destroyed, I’m opting for “the big clean,” as soon as the weather turns — which it is not doing today! Just returned from a 5-day llama backpacking trip in the Indian Peaks Wilderness. Today is for putting everything away and for LoL (lots of laundry), since the entire family was here last night. Tomorrow, we climb Estes Cone, which I can see out my window is swaddled in golden aspen.

A trip with llamas! How unusual and interesting for Colorado! It sounds like fun — a bit smelly, I suppose. Isn’t returning from vacation a drag? I processed two weeks of laundry after being gone for only one week, thanks to the overlap and missing my laundry day. While having to do LoL, I suppose the alternative — being blown to smithereens, is the less preferred choice.

I know, right? People are way too critical of restaurants.

Nice job on the Wyoming trip. Made me feel like I was there with you. Beautiful pictures and lovely commentary. See any bears?

Maybe because you were there with me? And as you recall, we avoided seeing bears by use of the highly scientific bear prevention charm: “Hey bear!” 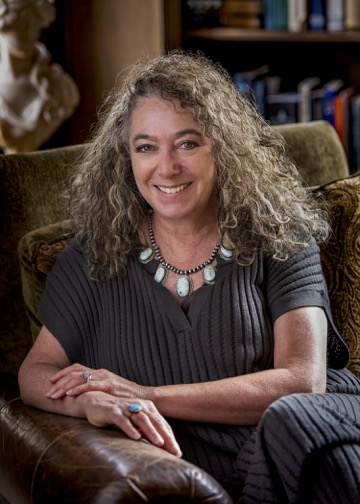