The other day at the grocery store, I picked up a copy of the Farmers’ Almanac and idly leafed through its pages while waiting to check out. Yes, it was that Farmers’ Almanac, still in print since 1818, the one full of planting advice, full moon schedules, and how to prevent tomato hornworms in summer. Luckily, the spiky creatures were photographed in black and white. But another photo caught my eye — vibrant even in black and white — of a young, blonde girl waving an American flag. It prefaced a story about American icons we identify with culturally, an amalgamation of Americana similar to the sort of things you might happen upon at an estate sale.

The Farmers’ Almanac defined America in terms of nostalgic icons: the American bald eagle, white picket fences, Thanksgiving, Norman Rockwell, the little red wagon, and Uncle Sam. All have different levels of significance. Some are legislated; others, like Uncle Sam, are the stuff of legend and possibly myth.

But after a recent visit to New York City for my son’s graduation, I sense there are other, equally iconic symbols representing what America is today.

While the bald eagle is our national bird, as a bird of prey, it’s not a friendly species. It thrives on opportunism and feeding off the little guy. I prefer Balto, a Siberian husky who led a team of sled dogs from Nenana to Nome, Alaska in 1925 to deliver diphtheria antitoxin to people dying from the epidemic. Frigid winter weather conditions, ice, and snow made it impossible for planes to fly from Anchorage to Nome, hence the reason the 650 mile trek across the Iditarod trail was undertaken in a relay run by 20 teams of dogsleds to deliver the serum. Balto’s driver was a Norwegian named Gunnar Kaasen. The epic journey is memorialized by a statue of Balto in Central Park. At the base of the statue there is the inscription, “Endurance · Fidelity · Intelligence”.

A visit to Balto in Central Park serves as a reminder of what can be achieved on behalf of others in spite of brutal conditions. 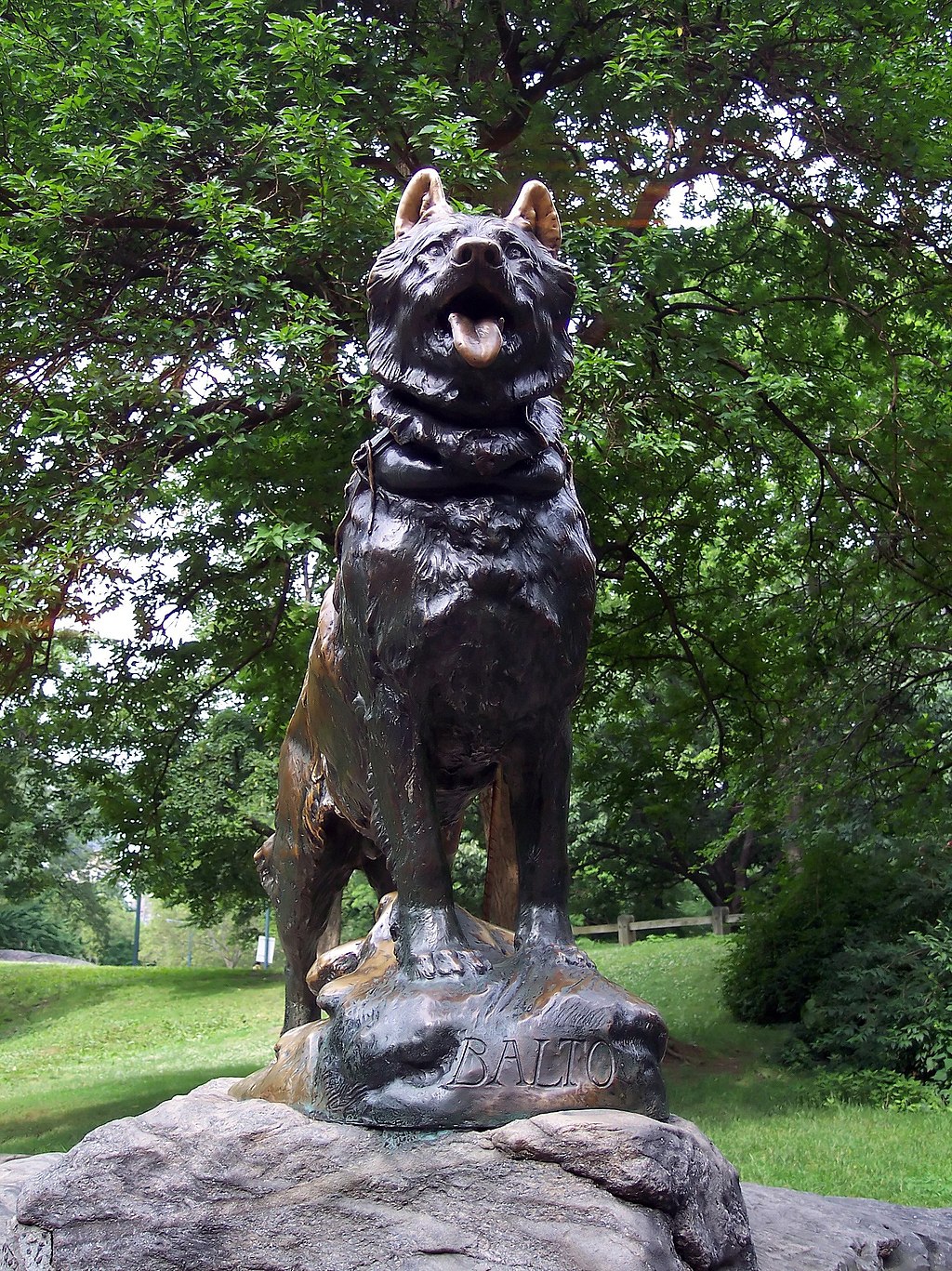 Balto, the heroic sled dog, is a representation of bravery on behalf of others. Photo by Uris (English Wikipedia), statue by Frederick Roth – Own work by the original uploader, Public Domain, https://commons.wikimedia.org/w/index.php?curid=777958

While the white picket fence may still enclose the dream home for some Americans, others are equally happy living in a tower that touches the sky. It’s communal living of a different sort, with shared common spaces and no grass to mow. And the picket fence doesn’t need a fresh coat of paint every few years. 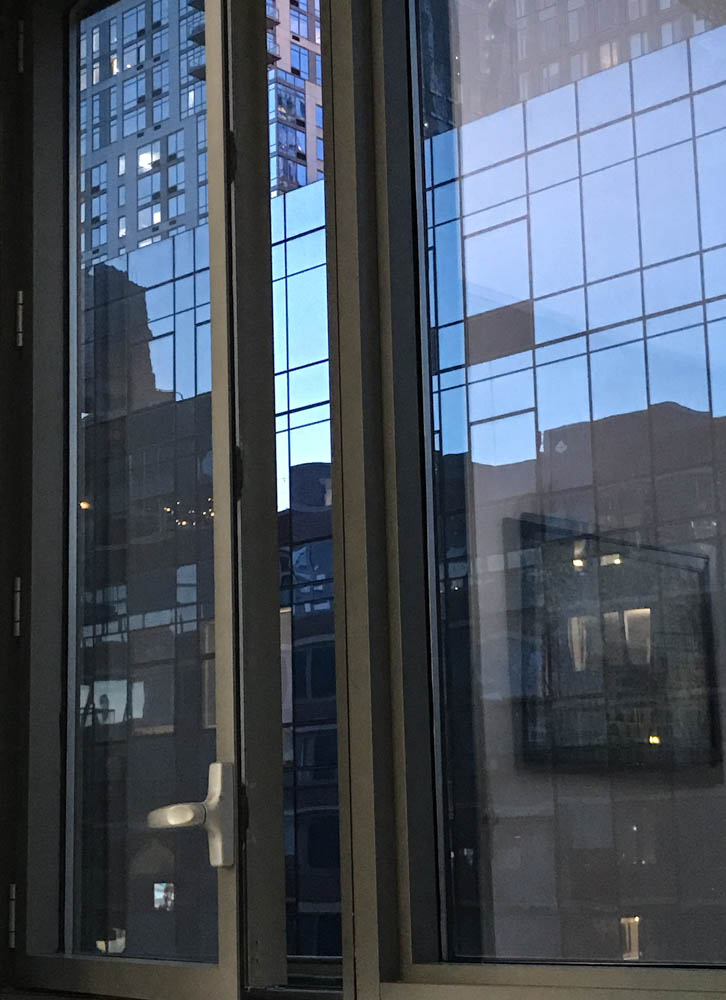 The white picket fence may surround the dream home for some, but for many, it represents limitations and exclusivity.

I enjoy Thanksgiving as an opportunity for perfecting my gravy-making skills, its notoriety as a one-day food coma, and according to the Almanac, “a feast that honors our faith. . ..” But in NYC, you can celebrate life with ramen noodles on a daily basis. That’s because ramen is available 24/7. Equally a family meal, there is nothing like slurping noodle soup with your loved ones. Did you know that slurping is considered a compliment in Asian countries? The noodle is celebrated by many different cultures: the Italians, Chinese, Koreans, and Japanese are only a few. There is even a religion, Pastafarianism, with its own deity, the Flying Spaghetti Monster. You can give thanks for noodles on every block of NYC. 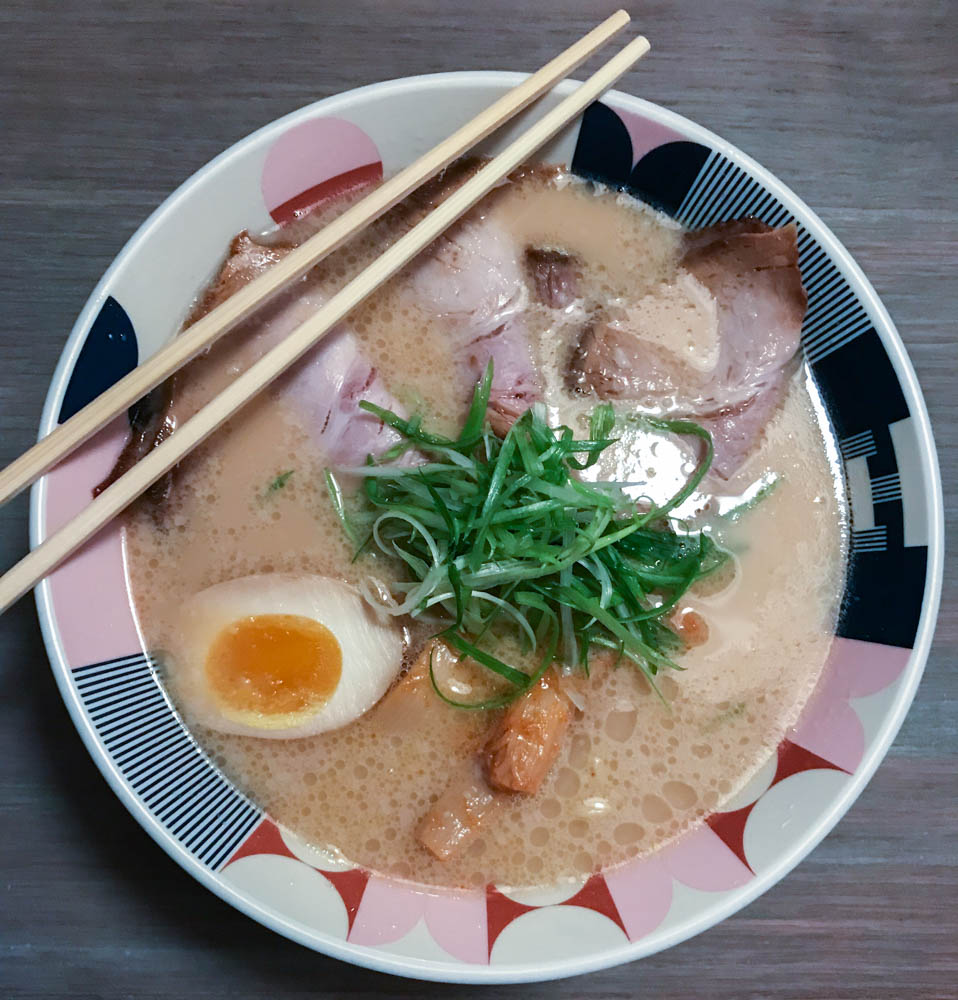 Ramen noodles are a life thread running throughout NYC.

While Norman Rockwell’s paintings provide a window into a world of idyllic microcosms, those Camelotian visions are gilded by a halo glow. I prefer looking up when I’m going down, and one of the best spots to do that is the mosaic tile mural, Funktional Vibrations, an artwork by Xenobia Bailey in the entrance hall of the 34th Street – Hudson Yards subway station. The work, which addresses “the universal idea of creation,” is drawn from Bailey’s African-American traditions and music of the 60s. It’s definitely got a psychedelic vibe going that will either send your senses swirling or put you into an upbeat frame of mind. I like to think of it as art on acid. 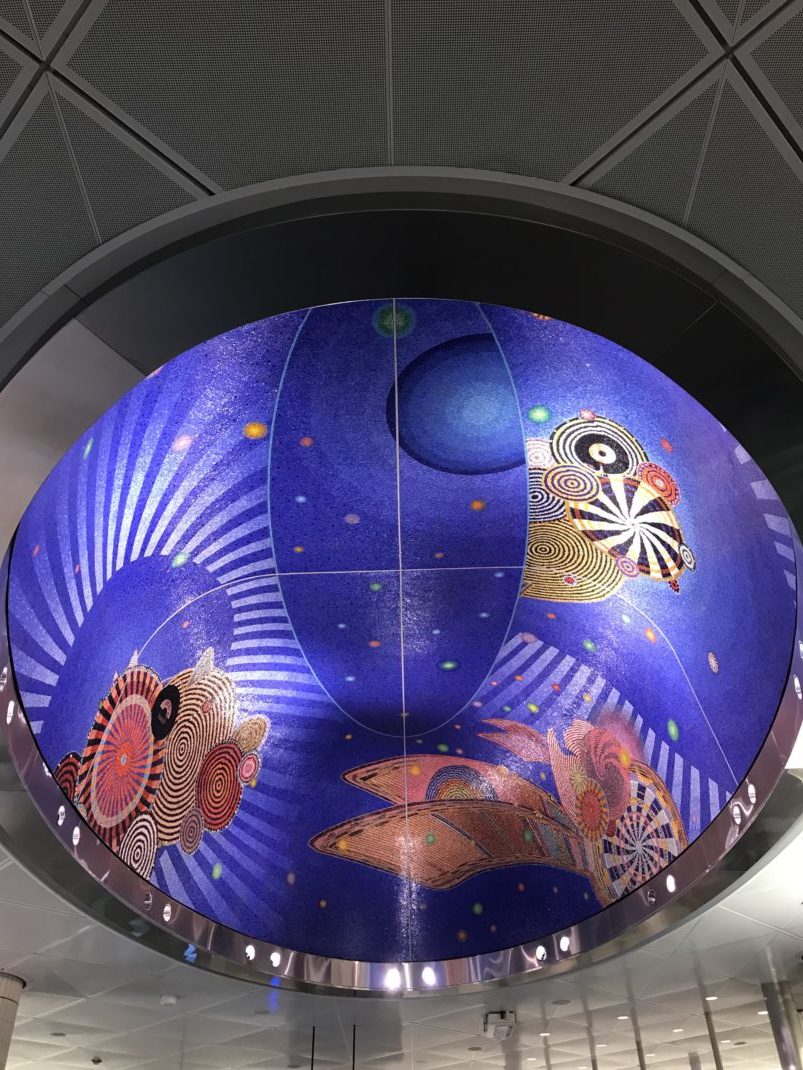 When art hits the ceiling.

Maybe the iconic Little Red Wagon holds a special place in Americans’ hearts, but design-wise, it’s full of flaws. The low profile makes it easy for the rider to fall out of the vehicle whenever a radical turn is made around a corner, its metal body is prone to rusting, and worst of all, someone has to pull it for you to get any forward motion.

That’s why I believe the bicycle — and the bicycle delivery guys, in particular — should be the new American icon. Navigation and the ability to dodge NYC traffic (buses included) are near miraculous. And the fact that dinner can be delivered without hazarding the streets of New York make these intrepid cyclists near saints. 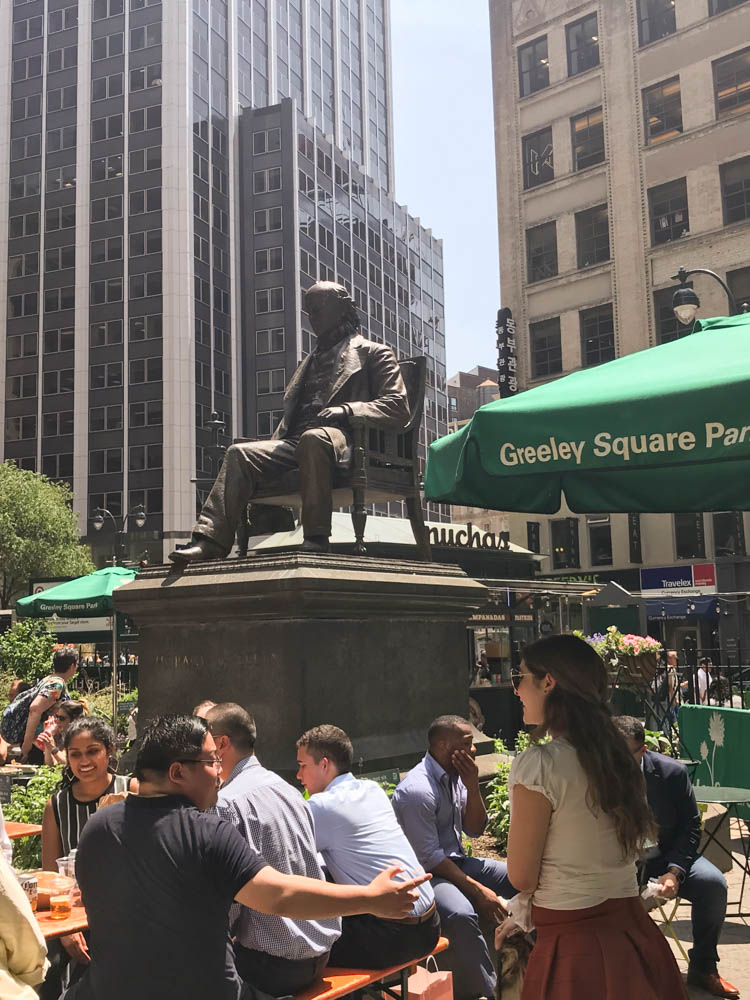 What charmed me most about Horace Greeley Square was the gathering of multicultural young people enjoying lunch and sunshine at the base of the reformer’s statue in the heart of Koreatown.

My hometown, Greeley, Colorado, exists thanks to the backing of New-York Tribune editor Horace Greeley, who encouraged Nathan Meeker to “Go West, young man!” and develop a community based on Utopian ideals. I was charmed when happening upon Horace Greeley Square at the intersection of Broadway, Avenue of the Americas, and West 32 Street. It was nice to see a familiar face and name in the middle of the metropolis’ throngs. Greeley was an advocate of abolition, civil rights, political reform, and ran a failed presidential campaign in 1872.

What impressed me most was the gathering of multicultural young people enjoying lunch and sunshine at the base of the reformer’s statue. As we walked through the heart of Koreatown in search of what Yelp promised was “the best ramen shop ever”, it struck me that Greeley was successful after all.

As we draw near to the Fourth of July and celebrations of the founding of our country, I thought it worthwhile to share a few of our most populous city’s icons. It prompted considerations of who we are as Americans today, where we are headed, and what we might leave behind in the mists of nostalgia.

Grilled Salmon with Herbs and Lemon

Love the icons you shared and your thoughts on their significance.

This seems particularly timely given the current administration’s attitude toward immigrants. I love the richness of the melting pot. Thanks, Emily.

One of my favorites of your blogs, Emily!

I liked it. Again you write so visually. I felt the same in NYC…globally and interconnected. We are a conglomeration of immigrants!

Superb insights and reflections! Made me yearn for a deepee dive into one of my favorite places in the world. Thx for the enjoyment of your writing!