Which Of These Things Is Not Like the Other

It could be said that people are much the same as other people, if we were to look at people in a blank, white canvas sort of way. Two eyes, fingers and toes, nose and mouth. We all have butts and bellybuttons, hair that isn’t fur and then there is saliva. Yes, in our spit we can see that we are the same living organisms. Human DNA is about 99 percent the same, no matter the race or color of skin. Evolution has seen little divergence.

It’s also said that, other than apes, cats are the closest in genetic makeup to humans — if science can be believed, they have a 90 percent genetic match, which is a lot closer than Man’s Best Friend. The dog can only lay claim to an 84 percent match.

How close are we to the cat? There are a few fine lines that can be drawn. Cats and humans have many diseases in common. I have a friend whose cat attacked her one day. The cat bit her leg and managed to find a vein — there was blood everywhere and her husband had to take her to the hospital to have it stitched up.

“He’s a terrifying cat, really,” she explained one night during dinner. “And completely unpredictable. He’ll be sitting there, pretty as can be and then suddenly, he glazes over and doesn’t recognize you. Much like schizophrenia, the vet said it’s a chemical imbalance in his brain. But being a cat, psychotherapy doesn’t help much.”

At times it’s obvious just how similar people are to other people. 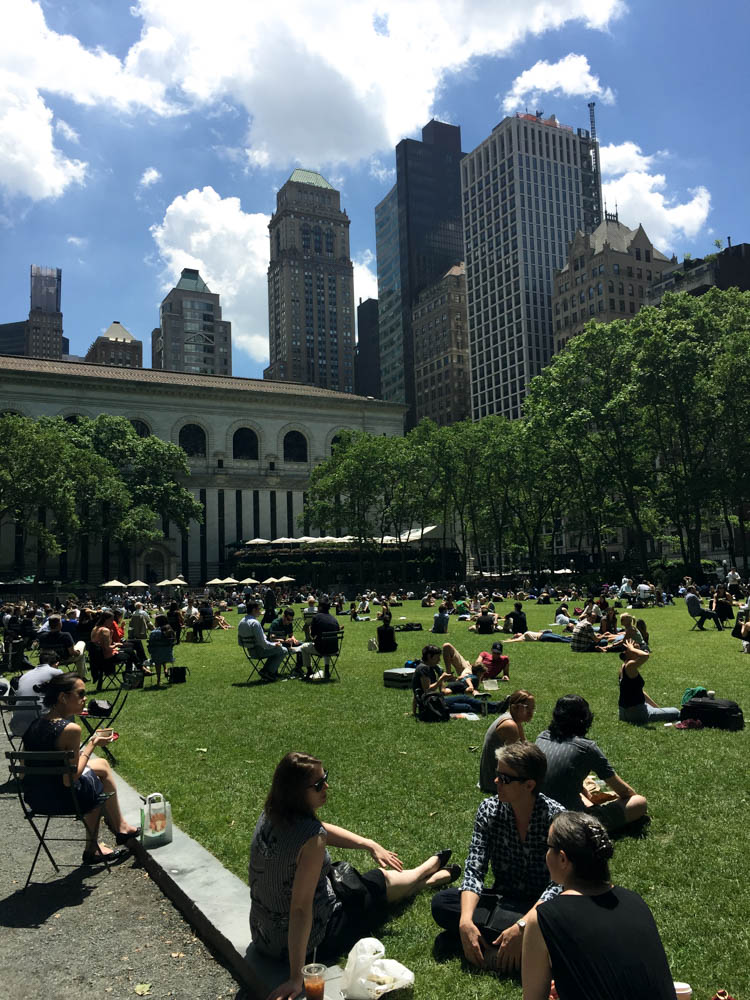 We were in New York City the other day on an afternoon of glorious, early summer. Or so we hoped a day like that promised more of the same. To escape the sidewalk hordes we strolled into the lush gardens of Bryant Park, a rectangle of green directly behind the New York Public Library. The combination of warmth and towering foliage touching puffs of white clouds against blue sky must have drawn the real New Yorkers down from their offices — because it was a Thursday. And while certainly there were some tourists like us sharing the sun-warmed grass, most of those had noses pressed to glass, window-shopping along The Avenue of the Americas. There were many more who make the city their home, attracted by sunshine glinting off the glass panes of their office windows, a magnetic force or maybe a sense of heat requiring immediate attention.

Because here were certainly Darwinian forces in action. All those human brains were suddenly struck  with the same thought. Sun! Park! A picnic — if only for half an hour. Don’t brief stretches of the urge to seek happiness factor into survival of the fittest? 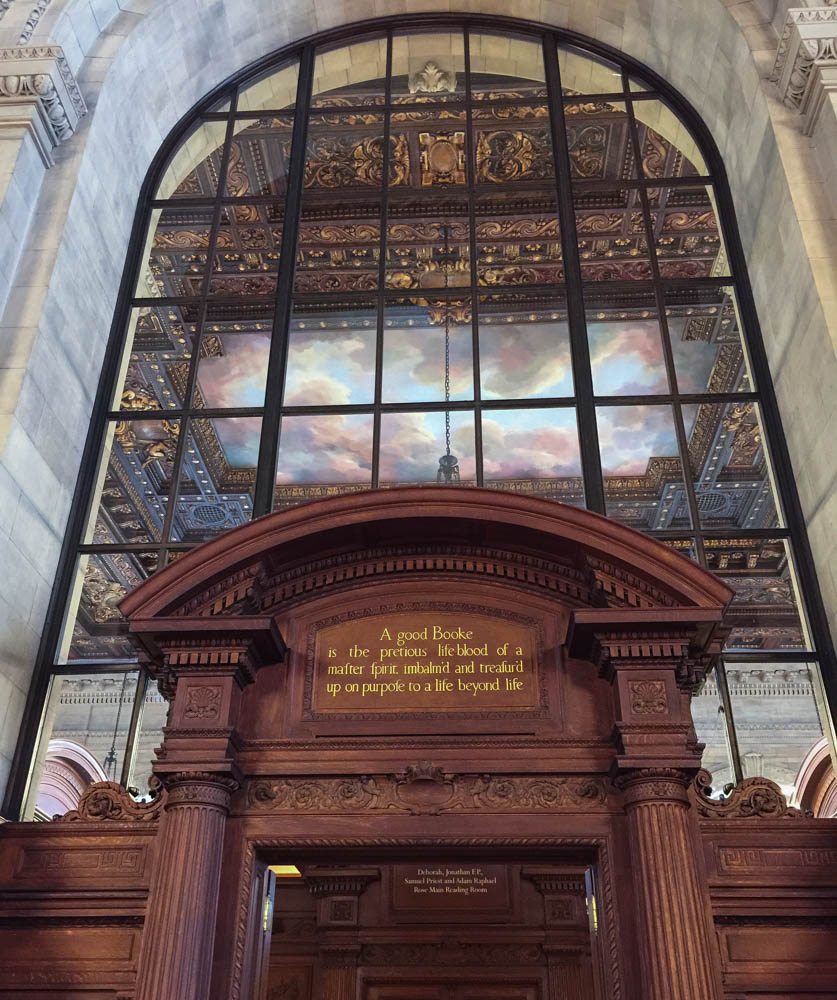 There is something about libraries and museums that send me into thought spirals. (New York Public Library)

There were droves of people. They were stretched out on the lawn in their business suits, they perched on rickety green-slatted chairs, they edged the graveled walkways, seated, strolling, taking a juggling class. I suspect the attempted jugglers were tourists, but maybe it’s a new thing dictated by Management to 21st century workforces. Go outside and play during recess — ummm, lunch.

We watched the jugglers, their batons rising and falling in precise unison — or so it seemed until you took a closer look. The baton tossing was a microcosm of how not similar people really are. Up and down, high, low, twirling and spinning in baton orbits, each was weighted and balanced so that it might act in tandem and match another. It all depended on the throw. The flick of wrist, the length of arm muscle, the determination and the level of interest of the thrower in getting it just right. It depended on timing and skill; it depended on intent.

The baton throwers made me think about the Campbell’s Soup Cans — the iconic ones, the ones painted and silk-screened by Pop Artist Superstar Andy Warhol, the ones I had marveled at the day before at MOMA — the Museum of Modern Art. 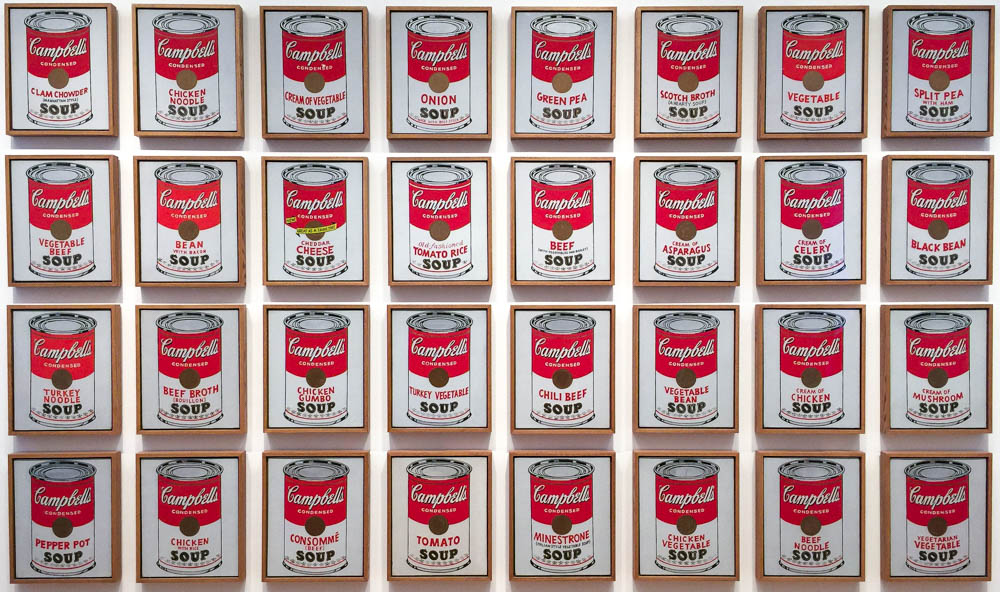 It’s said that Warhol’s success in Pop Art generally — and the 32 cans of Campbell’s soups particularly — was because he had painted ordinary sameness, something anyone evaluating a row of prepared soups at the grocery store might encounter. There is not much more ubiquitous in life in America than a red-and-white can of Campbell’s soup — which is in large part his point, at least until you take a closer look at each of the 32 cans.

To begin with, it’s not the same soup. There are not 32 cans of Scotch Broth. Each can has a bit of difference about it. Subtle and unremarkable, unless you stand and look at each one in turn, there are variations. There is a gold banner on Cheddar Cheese, a banner that doesn’t exist on any of the others. There are the words “Beef” in red beneath “Consommé,” by way of an explanation: the soup is beef consommé, not chicken. There is an additional row of black lettering on Clam Chowder, Beef and Minestrone, in part because these three seemed to require a bit of explanation to consumers. Possibly they are soups that Campbell’s thought deviated from the standard fare of soup-sipping Americans at the time, soups requiring a bit more definition of what they contained. Minestrone? What sort of nonsense is a good, American company like Campbell’s trying to put over on us? Oh, okay, it’s Italian. And it’s vegetables. So why can’t they just call it vegetable soup over in Italy? 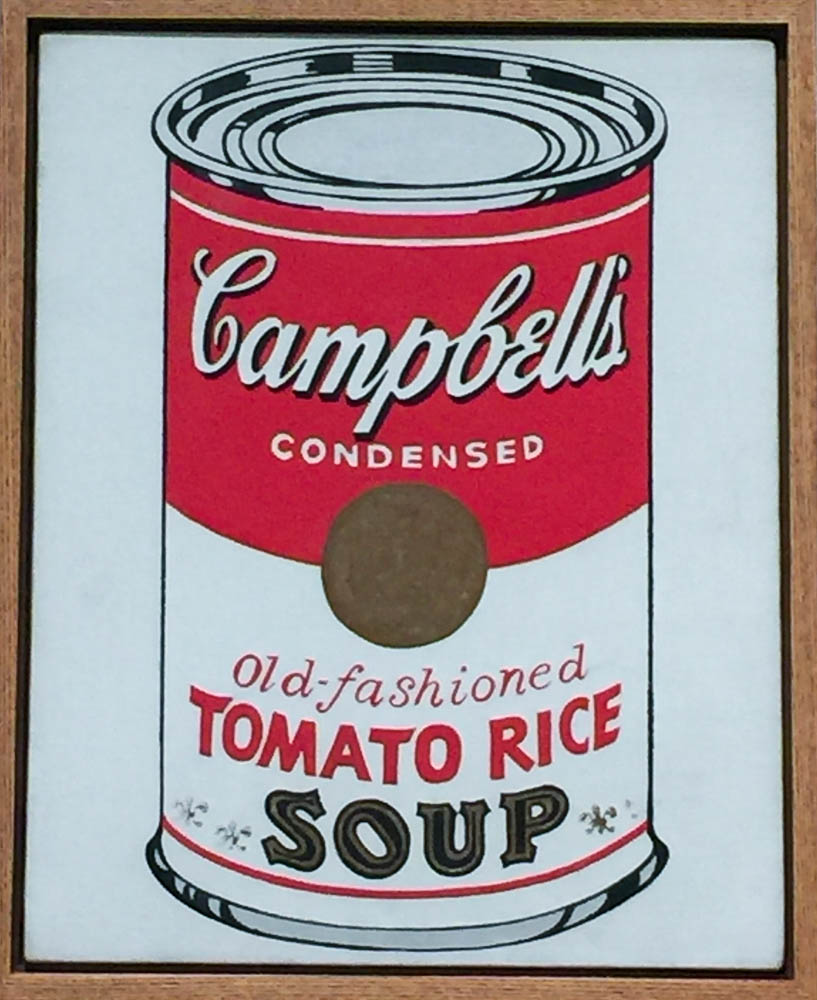 A painting of a can of Tomato Rice soup delivers social commentary before taking a sip. (Andy Warhol, MOMA, NYC)

And then there is Tomato Rice. That can has fewer fleur-de-lys stars and has a white rather than a gold band, leading me to wonder if there is something off about Tomato Rice. Was Warhol making a cross-cultural statement about the consequences of putting grains of rice into a creamy, tomato soup?

I could stand and evaluate the same-not-sameness of the Andy Warhol Campbell’s Soup can paintings for hours. Except I can’t, because it would make all the tourists who want to take photos of the soup pictures angry. How nit-picky must you get, looking at art? Art has temporary appeal and then it’s time to move on to lunch. Looking at paintings of food always makes me hungry.

At some point it doesn’t matter all that much if the soup cans seem remarkably similar on the outside — save a few, slight differences. It’s what you discover on the inside once the can opener has completed its round.

Life is made up of transactions with the other multitudes of people — and cats — we encounter daily, hourly, by the minute. Every time you walk into an elevator or sun-dappled park there’s another one.

And as much as we’d like to think that a person’s outward appearance is a reliable indicator of sameness, we know that isn’t true. They’re wearing torn jeans and a Gap T-shirt. It doesn’t matter. It’s what’s on the inside that makes us all a little bit different. A little saltier, a bit more pepper. Full of ham and beans. Creamier or chunkier, loaded with noodles or rice. Or as clear and uncomplicated as beef consommé. Or so you might think.

I bet Andy Warhol knew that, too. He was just pulling our leg.

Interested in reading Emily’s recent award-winning novel, Drinking the Knock Water: A New Age Pilgrimage? Find it on Amazon and in Indie bookstores.

Ok, a hint: Yes, it’s definitely the cheese soup that’s the MOST different . . . but all the cans have small differences. The biggest difference is what’s inside. And the post says why. . .

I believe they all just different flavors of there soups😀 however the cheese answer has one emblem the others don’t.

Like my sister’s answer when her dr ask her how many nickels in $1.35. Her answer was “who cares”.

They are all different flavors.

Is it the cheese soup?

The cheese soup is the most different, but they’ve all got subtle ones, inside and out. Just like people. . .

I like to think I notice the differences in people, but I you surely have made me realize that I don’t observe a lot of things closely enough! This is really interesting, Emily!

Thanks, Lynne. You excel at noticing people’s differences! I think I was in a Warhol-enhanced mood of overcharged observation when I wrote the first draft of this post and this was the result. However, I do believe in a shred of its truth, according to my mantra “People are just people.” The corollary is “and they’re also weirdly unique, too.” It’s a segue into Novel 3.