Why Can’t I Take the Cheese IQ Test Instead?

Why Can’t I Take the Cheese IQ Test Instead?

Every so often, I catch myself procrastinating, doing those things we all do when we know we should be working instead. I think it happens when I can’t get words out onto the page (or screen, to be specific). There is so much more to procrastinate with than there used to be, so it happens easily. I trick myself into believing I could be more productive wasting time surfing the Internet, because I hope to happen on some random, erudite concept which will unclog my brain, and trigger the words, allowing them to pour out. I also find myself on Facebook, just to see what the rest of the world is up to, because I’m certain it’s more interesting than sitting at my desk. That’s how I ended up taking the same personality test this week, twice. I was sure they hadn’t got me figured out, on the first go-round.

The first time I tried Dr. Phil’s Personality Test (so I could discover what others, and potential employers, thought about me), the result was so cloyingly nice: the test informed me that I was “fresh, lively, charming, and amusing,” as well as “practical, well-balanced, and ready to cheer people up.” It was too good to be true, so I decided I must have answered the questions wrong. These things are geared to play on our insecurities, those worries always simmering below the surface of our conscience that we don’t quite measure up, somehow. But, there are so many open-ended questions; the answers might be all over the map, depending on my mood, right? So, I took a couple days off, and answered the questions again.

I made absolutely sure I was following the instructions. I wanted to get it right, this time. The test instructed that I should “answer for who [I was] now. . . not who [I was] in the past.” That wasn’t a problem. I was certainly a different person from who I was two days ago. 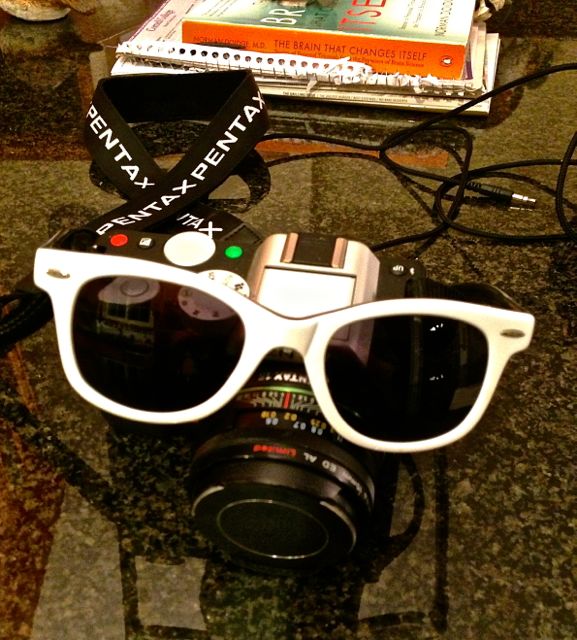 When you take a personality test, it’s important to understand the rules. To administer tests to dogs, practicing with an inanimate object first is advisable.

The second time around, I had turned into a “very cautious” person, one of those “slow and steady plodders,” the kind of person who would surprise their friends should they ever do something on the spur of the moment. Impulsive? Not me. Let’s take a step back and think about this for a moment, that’s the kind of person it said I was. Suddenly, everything had become dark and dreary, all because I informed the online test that I preferred dark blue and purple, rather than green. When I told the test that I liked to relax with my legs stretched straight out in front of me (rather than one leg tucked underneath, as I’d marked down for the first test), the flowers had wilted, and I’d become a plodder.

So maybe, I decided, I had been tired. What with all the flooding in Colorado over the past few weeks, I haven’t been sleeping well; I have a friend in a mountain town who has most likely lost everything she owns. The floods had washed away another pair’s road from their mountain home, and they have to walk two miles to access one. My dreams were full of rushing water.

Maybe, there was a better personality test to take, one which was more accurate. So what if Dr. Phil and Oprah loved this personality test. I scooted around the Internet, but they all looked similar.

Question 1:  If blue is red, and yellow is orange, how many bumble bees are there in the hive?

Question 2:  Eloise gave Lenora three apples, but only gave you one. Are you pissed off at Eloise? Or do you think Lenora did something behind your back, which made Eloise like her better than you, which is why you only got one apple? And didn’t Eloise know you wanted grapes for lunch, anyway?

Question 3:  Why is the sky blue? And why isn’t it patently obvious that the only purpose of this test is some nefarious method of prying into my psyche and making me feel rotten?

So, I decided to get Harrison to help me give the collies, Mopsy and Flopsy, their own IQ test instead. They have dog tests, too. Did you know that? 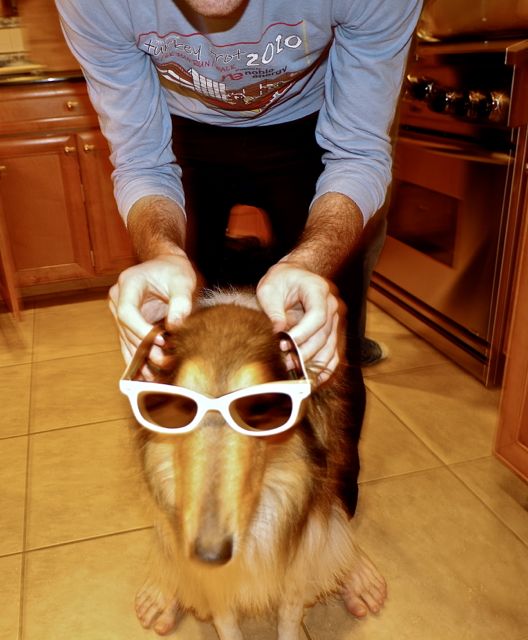 It’s always a good idea to introduce the dog to the idea of wearing sunglasses, in order to avoid outright rejection.

Dog tests, the ones that are really accurate, the ones that can predict if your dog is a genius and will be accepted into Harvard Medical School, all revolve around food. Cheese is a favorite choice.

The test giver (dog owner) has several options, but it is necessary to begin the exercise by introducing your dog to the cheese. For example, I show Flopsy the cube of cheddar in my hand, and allow her to sniff it. Since Flopsy knows that anything I offer her to eat will taste better than that brown, crunchy crap in the dog bowl, she is now aware that this must be a good activity. Now, all the dog owner must do is hide the cheese. It can be under a can, it can be under a towel, it can be within paw’s reach under a piece of furniture. The greatest part about this game — oops, I mean test, is that you always show Flopsy where the cheese is going, and with a few hand gestures and encouraging remarks, as in, “Flopsy! Go find the cheese!” you make suggestions about what she ought to do next, if she has any aspirations to attend Harvard Med School.

The problem with these sorts of intelligence tests is that the dog must be hungry. She also must like to eat a lot of cheddar; she can’t sit back on her haunches and say, “Well, you know, that was awfully lovely, but I’m hankering for a perfectly aged slice of soft camembert, if you must know.” This is a limiting aspect for tests of this sort.

Once you reach a point of cheese saturation, there is one additional avenue you can pursue, if you are still uncertain whether Flopsy will ever be a doctor. That solution lies in the ice maker in your own refrigerator. Anyone who’s eaten enough cheese knows that after a time, you become very thirsty. This is where the feet hit the road, and the buck stops. 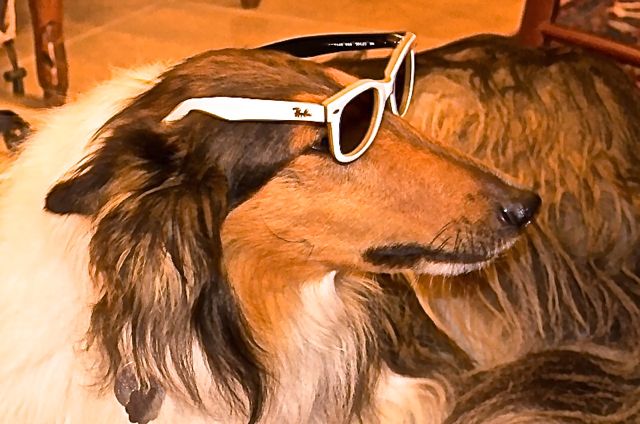 Cool is cool. Mopsy’s Intelligence Quotient is close to being established.

From the second I push in the plunger, and the ice cubes tinkle into my glass, I have the dogs’ attention. Mopsy diligently appears at my side, mouth open, ready for the offering. On the other hand, Flopsy sits on the rug, head on paws, waiting patiently. She knows that I treat both of them equally, and once I’ve given Mopsy her cube, I’ll walk over and give one to her. It takes several tries; she drops it twice, not exactly remembering why a person would shove a freezing block into her mouth, particularly when only a few minutes ago, there were squares of cheddar cheese conveniently located under all the chairs in the kitchen. 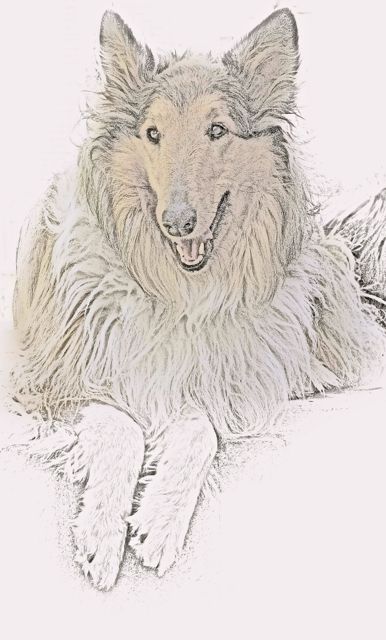 Flopsy believes life is good, because all you have to do is sit and look pretty. Then, the ice cubes will gravitate towards you. Photoshop Line Drawing courtesy of D.J.Kemme

All this makes the decision obvious: if hungry enough, cheese tests would be good determiners of people’s personalities.

And, if you’re still not convinced, consider this. There was this scary story I remember which circulated at campfires when I was little. I’m sure you heard it, too. It’s the one about the blind old lady who had a loyal dog that would lick her hand whenever he returned to her side. And then one day, she was gruesomely murdered by a guy who plunged a hook into her sternum, with the note that, “Humans can lick hands, too. . ..”

I know you hated that ghost story as much as I did. Which is why I think that humans can most likely eat cheese, too, if we really want to know what our friends think about us. It’s all in the mindset.

Very cute and Doug is a good artist.

Thanks. He took the photo and sharpened the features using photoshop. That exaggerated the lines. Then he switched to black and white, and added tinting, which I boosted in a few spots to make Flopsy’s coloring stand out more. Fun process!

I’m procrastinating. I’m supposed to be writing a paper and I’m reading your paper instead! Interesting thing I noticed in one of the pictures. At first glace, when scrolling down, your dog looks like he has human feet! Look at the picture with Harrison holding glasses on the dog’s face. Ha ha funny.